Nothing sucks the life out of a community more than surface parking lots.

So it’s no surprise that the Castleberry Hill Neighborhood Association recently voted unanimously against a proposal by the Parc Vue Condo Development II, LLC, managed by Herman J. Russell, Sr., to change the zoning laws to permit “park-for-hire” surface parking lots on a wide swath of property near the new Atlanta Falcons stadium.

The Russell organization has proposed to remove “park-for-hire” lots as a prohibited use from the area that covers the better part of 10 blocks south of the new stadium between Northside Drive and Castleberry Hill.

The application had been scheduled to go before the Zoning Review Board on the night of Wednesday, Aug. 14, but Jerome Russell said on Monday afternoon that they had withdrawn their application so they could have an opportunity to meet with the community.

Yet it’s hard to see how the Russells and the Castleberry community will be able to reach consensus on allowing the fragile urban area to become permanently paved with asphalt – basically stifling any possibility of economic vitality on the property that is used for overflow parking during game days.

“Surface parking lots effectively destroy the neighborhoods surrounding sports arenas by isolating them behind seas of asphalt,” said Everett Lee Morris, IV, an attorney and financial planner who was speaking for the Castleberry community. “This is what occurred with Turner Field, which negatively impacted the neighborhoods of Summer Hill and Mechanicsville severely.”

In its application, the Russell organization argued that the “park-for-hire” should no longer be a prohibited use because the property has been operating as surface parking lots for years.

But that argument doesn’t hold much weight with the community.

“Mr. Russell has continuously and knowingly violated the zoning ordinances which clearly restrict any use of the property for surface parking,” Morris wrote in an email. “He is not bashful about his blatant disregard for the zoning laws and the well being of our neighborhood; in fact, he relies on his consistent violation of the law as a reason for this restriction being lifted.  He repeatedly argues in his application that because he has broken the law for so long, that the law should change to suit him.”

Morris went on to write that: “Our neighborhood has been attempting to get the city to enforce the zoning restriction which Mr. Russell admittedly violates constantly for years, with little success, as you can see from the way Mr. Russell brags about his consistent illegal parking lots in this application.”

That led community leaders to believe the proposal had died upon the weight of being a bad idea – especially for a city that said it was seeking to reinvigorate the neighborhoods around the new stadium with new life.

But parking proposals are a bit like cockroaches. They refuse to totally die. They may bury their plans for months at a time, but then passionate parking promoters find ways to revive and reintroduce proposals for even more surface parking. 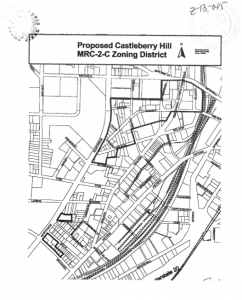 But Morris said that the “executive board of the Castleberry Hill Neighborhood Association, the CHNA General Body, the Neighborhood Planning Unit Land Use Committee and the NPU General Body all voted to deny this application UNANIMOUSLY.  Not by a majority, not by a super-majority, but unanimously.  Not a single person anywhere near these properties thinks that surface parking should be allowed, other than Mr. Russell, of course.”

Interestingly enough, Herman Russell Sr. was one of the leading business community advocates to locate the new Falcons stadium on the site south of the existing Georgia Dome so it could be better integrated with Atlanta’s urban fabric. The other alternative had been the north site, which would have been more than a half mile away from the two MARTA stations that straddle the existing Georgia Dome.

“I think the ideal location would be south,” Russell said in 2012. “I just think it’s a perfect area to locate the new stadium. It would make economic sense to put it there.”

But what economic sense does it make to put the stadium on the south site, next to two MARTA stations, positioning the world-class sports facility to connect downtown with the westside, if one then paves over most of the area around it?

Surface parking lots are the lowest common denominator in a city – a visual eyesore that suggests there are no signs of life and activity in an area. In Atlanta, we’ve seen how churches have torn down perfectly beautiful historic apartment buildings and performing arts facilities so they can have more parking on Sundays – leaving a painful empty parking lot the remaining six days of the week.

We as a city should be getting rid of all our surface parking lots and replacing them with vibrant activities – places where people live, work, shop, eat, play and enjoy nature.

Let’s treat parking as though it is our ugly, smelly garbage. Let’s bury it, hide it, deck it, camoflauge it. Let’s do anything other than letting it spread over our city’s blocks like the plague.