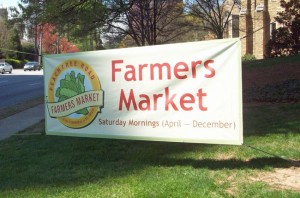 The Peachtree Road Farmers Market opened for its 8th season at The Cathedral of St. Philip on April. 5th. The Saturday market will remain open until December 13th.

Through all the ice, snow and harsh temperatures of Atlanta’s recent winter, Christi Behrend waited for the Peachtree Road Farmers Market to open for the season. She keeps an organic kitchen at home and likes to support local farmers. The market, only 10 minutes from her home, shortens the distance from farm to her family’s forks.

“You can shop DeKalb Farmers Market and Whole Foods but it’s not the same, definitely not the same,” said Behrend.

On a sunny morning Saturday, her wait ended in the parking lot of the Episcopal Cathedral of St. Philip, filled with 50 vendors operating out of pickup trucks and popup tents to open the eighth season of the largest producer-only market in Georgia, according to Lauren Carey, market manager.

Weather and other variables make the weekly mix of vendors change up, but the market itself enforces and thrives on steady rules, starting with the bell that rang at 8:30 am.

“If people want tomatoes from Peru then there are wonderful places to go get that,” Carey said. “But when people want something that is Georgia-grown, fresh, seasonal, what’s harvested in the last 24 hours and you can taste that difference, they come here.” 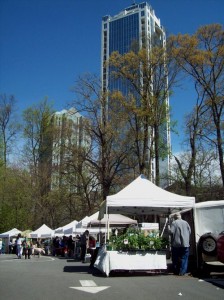 The market, located in the heart of Buckhead, is largest producer-only farmers market in the state of Georgia, organizers say.

The weekly market, which extends until Dec. 13, draws 70 vendors from as far away as Blairsville and Savannah on a rotating schedule to fill the 50 spaces every Saturday. They sell everything from “humanely sourced meat” to fruit, vegetables and herbs produced through “biodynamic growing methods.” They also sell “artisan” salts, pasta, granola and yogurt.

Shoppers and monitors go to the source

For shoppers like Behrend, the experience extends beyond one day. For her, the market represents an extended community with shared values.

Behrend said she’s even gone down to visit two of the vendors’ farms. One was Decimal Place Farm in Conley, where they let her 4-year-old son Sam milk the goats.

“The great thing about this farmers market is you get to develop a relationship with the people you get your food from,” said Behrend.

The other one she visited was Country Gardens Farm in Newnan, which sells grass fed beef, raw milk and naturally grown vegetables and vegetable plants. John Alexander was representing Country Gardens Farms at the Peachtree Road market, and promising each customer as they checked out, “No commercial fertilizers, no shots, no antibiotics.”

The farmers at the Peachtree Road Farmers Market must be certified organic or certified naturally grown. The arts and crafts sold at the market must be handmade. To enforce this standard and ensure fair market competition, Carey conducts farm visits. That refereeing impresses farmers like Alexander. 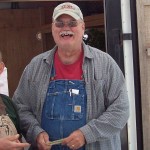 John Alexander of Country Gardens Farms at quitting time after the Saturday opening of the market.

“You can’t come here unless you grow it,” Alexander said. “I can’t go down the road and buy it and then resell it. Ab-so-lutely not. They come to your farm. They have put people out for selling strawberries and it ain’t strawberry season.”

“I like that part of it,” Alexander said. ‘Lauren is very stern, but very fair.”

Carey’s off-season responsibilities of monitoring her vendors to ensure they comply with the rules is one reason why it is a full-time job. With one part-time staffer and 35 volunteers, the market operates under the Cathedral of St. Philip’s 501c3 as a independent nonprofit.

“We make certain promises about what we’re going to deliver and our customers expect that level of accuracy and enthusiasm and we welcome those [farmers and craftspeople] who can continue to do that,” she said.

Alexander’s customers understand and value the work reflected by his pricing. “The customers that come through here are more educated on what the process is,” Alexander said. “Our items are high, but I don’t ever have a complaint about ‘this is too much.’ And I get $8 a gallon for milk. They know what they’re getting.”

The number of farmers markets nationwide has grown exponentially since the U.S. Department of Agriculture first published a national directory of them in 1994. Then there were 1,755 known to be operating in the country. In 2013, the USDA recorded 8,144—a 364 percent increase and more than double the number in operation a decade earlier.

The biggest increase recorded by the USDA occurred during the Great Recession. After 2008, the agency switched from updating its farmers market directory every two years to every year. In 2009, 2010 and 2011, the USDA added more farmers markets to its directory than it did for any of its biannual publications between 1994 and 2008.  The largest jump took place in 2010 when 1,043 farmers markets were added to the list.

Surveys consistently point to a variety of reasons for the popularity of farmers markets: the relaxed atmosphere of the casual outdoor shopping experience, the chance to meet friends and neighbors, the freshness and quality of the food and the opportunity to support local farmers, among others. 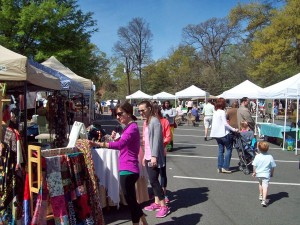 Just as the produce must be locally grown, arts and crafts sold at the market must by locally made, by hand.

The market keeps fairly rigid hours, ending with a bell at noon. The vendors break down their tents and pack up quickly.

One was Suzi Sheffield, owner of Beautiful Briny Sea, who packed up her remaining salts, which are seasoned from locally foraged mushrooms, herbs and spices.  “Now my day is done,” said Sheffield, satisfied with the market’s reliable operations.

The mild weather also was welcomed after the extremes of past market openings.

“Once we had the heat on and twice we had the air conditioning on,” Carey said of market openings. “This morning we just tried to get the doors open and not get swallowed up by the yellow (pollen).”

Carey said that the extended colder weather may bring changes to what some of the farmers will be offering at the market this year, “particularly fruiting trees, depending on whether they have blossomed or not.” She pointed toward the tent of a fruit farmer from north Georgia, who brought daffodils instead of the usual. The cold is lingering up there.

“Every year, every opening day,” said Carey, “is different.”

Previous Article
Two Tax Scams to Look Out for as the April 15 Tax Deadline Approaches
Next Article
Natasha Trethewey: poetry of place