In the span of three days, Atlanta honored two of its 95-year-old icons.

A celebration of life was held in honor of Charlie Loudermilk Sr., who died on Aug. 3. The event, held at the Peachtree Road United Methodist Church in the heart of Buckhead, was one-of-a-kind for Atlanta. For 90 minutes, the established and prestigious white church was turned into a Black church — full of clapping and dancing — thanks to the Trey Clegg Singers, Kathleen Bertrand and other performers.

Three days later, another historic event was held to celebrate the 95th birthday of Christine King Farris, the older sister of Martin Luther King Jr., at the historic Ebenezer Baptist Church where her brother, her father and grandfather had preached. Again, it was a celebration full of music and song, titled “Make Joyful Noise,” and described as choir rehearsal. 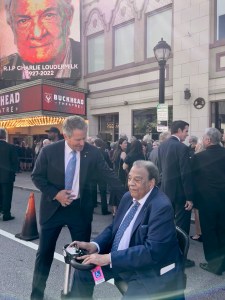 Andrew Young rode his scooter from the Peachtree Road United Methodist Church to the Buckhead Theatre for the reception celebrating the life of Charlie Loudermilk. (Photo by Maria Saporta.)

Both Loudermilk and Farris were part of Atlanta’s evolution from a small Southern town to an international city that also was the cradle of the civil rights movement, but they viewed it from different vantage points. Loudermilk’s base was Buckhead. Farris’ life began on Auburn Avenue — labeled by Fortune Magazine in 1956 as “the richest Negro street in the world.”

The juxtaposition of these two bookend events celebrating two local icons revealed so much about Atlanta — how we as a city continue to weave a mostly harmonious fabric between white and Black Atlanta.

The common denominator between both events was former Atlanta Mayor Andrew Young, who turned 90 earlier this year and who continues to serve as the spiritual conscience for Atlanta.

During the celebration of Loudermilk’s life, the music began with the spiritual “Lift Every Voice and Sing,” recognized as the Black national anthem. The people in the pews were relatively quiet — not clapping after the song — which is customary in white churches.

But by the time the second and third spirituals were sung, a spirit infused the congregation, and people were clapping throughout the songs and even standing up to dance.

“Papa would be in hog heaven, if he’s not already there, to see this gathering of family and friends,” said Robin Loudermilk of his father. 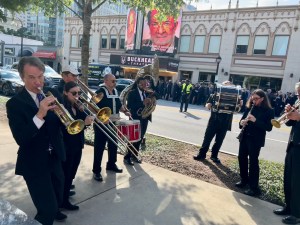 Then he recounted how Charlie Sr. would come by the office regularly to ask how the company was doing.

“Are we doing okay?” he would ask his grandson. “I’m not pulling my weight around here. Charlie, you’re the boss. What do I need to be doing?”

To that, Charlie III answered: “You’ve done enough Papa. Your job is done.”

Several of his grandchildren spoke, describing their grandfather as “larger than life,” who was more concerned about whether they were having fun in school than how they were doing academically.

Lisa Loudermilk deGolian, his daughter who planned and executed the entire service perfectly, said her dad knew what it was like to be an underdog who believed “life is good when you’re happy, but life is happier when you have made other people happy.”

Charlie Sr.’s other daughter, Linda Loudermilk, described her father as “mischievous,” and said Andy Young was his best friend.

Then Atlanta singer Kathleen Bertrand belted out a rousing rendition of “Georgia on My Mind,” right before Young came up to speak.

“I don’t know if you realize it, but I realize it. I’m not needed here,” Young said. “We have had a celebration of life of Charlie Loudermilk that even he would be proud of.” 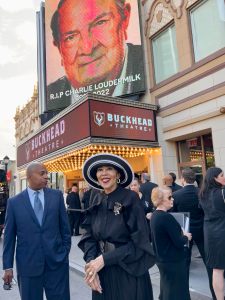 Carolyn Young, wife of Andrew Young, stands underneath the marquis of the Buckhead Theatre with Charlie Loudermilk featured. (Photo by Maria Saporta.)

Young spoke of the bond between five friends who would get together whenever there was trouble in the city: Loudermilk, Young, Herman Russell, Jesse Hill and John Portman — who called Loudermilk Charlie Lot-of-Money — to figure out what needed to be done.

“One of the keys of Atlanta’s success, we have got a lot of people coming here with courage, dreams and vision,” Young said. “We learned how to work together and generate wealth.”

Young and Loudermilk did disagree on whether Atlanta should go after the 1996 Olympics, but against all odds, the Games were awarded to Atlanta, which Young described as 17 days of glory.

“That’s the way the Lord works,” Young said. “The hand of God moves through the streets of Atlanta… Charlie Loudermilk caught that spirit. He laughed, and he joked and he played. He was walking around with an open mind and an open heart, and we see it in the music and the spirituals here today. All of us have been infected by the spirit of God moving through these streets. God has blessed us through Charlie.”

Then in another first, Bo Emerson and the Brasstown Tonic played “When the Saints Go Marching In” to lead the congregation on a march several blocks down Peachtree Road to the Buckhead Theatre — restored and owned by Loudermilk — for the reception.

“That was the best service I have ever attended,” said Chip Matthews, a friend of Robin Loudermilk. “We walked out of there feeling like we need to live a happier life. I want to live like Charlie.”

The Christine King Farris 95th birthday event was just as impactful with a wonderful blend of songs and speeches. 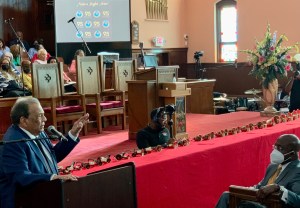 “All of us have been following you ever since,” Warnock told Farris, who was sitting in the front row with her two children — Dr. Angela Farris Watkins and Isaac Newton Farris Jr. — among several other dignitaries.

“Christine Farris is the longest serving member, not the oldest — my mother didn’t raise no fool, of Ebenezer,” Warnock said. “I am Christine King Farris’ pastor. I have felt your prayers. I have felt your love. You are the embodiment of spirit, of style, always sharp. You always wear the crown… Happy Birthday Queen Mother. Long live the Queen.”

The regal imagery certainly fit Christine Farris, who was impeccably dressed in a matching dress and extravagant hat. 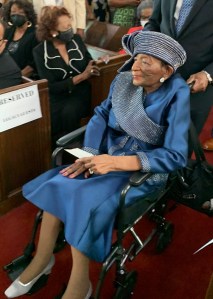 Her niece, Bernice King, who is CEO of the King Center, described her Aunt Christine as a woman of grace, elegance and faith. A woman of great integrity and great inspiration, a godly, sanctified Diva.

“My aunt served the King Center for some 51 years,” Bernice King said. “To this day, she’s the longest serving volunteer of the King Center. She did it all without any salary. We are here to celebrate this servant of God — Aunt Christina. Thank you for being the matriarch of our family.”

Judy Forté, superintendent of the Martin Luther King Jr. National Historic Park, which includes the historic Ebenezer sanctuary, said it was good to see a packed house in the historic church after being closed due to the pandemic. Forté recalled Farris telling stories of how her two younger brothers would be playing up in the balcony during church and told by their father to “come down here and sit with your grandmother.”

To Farris, Forté said: “She’s a woman of few words, but when she speaks, everyone else listens.”

Then it was Andrew Young’s turn. After speaking about the movement, Young led the congregation in singing “I Love Everybody in my Heart.”

Renee Glover, chair of the Ebenezer board of trustees, said of all the times she’s heard Young speak, she had never heard him sing. Again, it was one of those Atlanta moments.

At the end of the celebration, Farris was handed a microphone, and instead of speaking, Atlanta’s Queen Mother sang the spiritual “If I Can Help Somebody.”

The lines she sang were especially on point: “If can help somebody as I pass along this way, then my living will not be in vain.”

Atlanta’s tapestry is richer because of Charlie Loudermilk, Christine King Farris and Andrew Young — and so many others along the way. 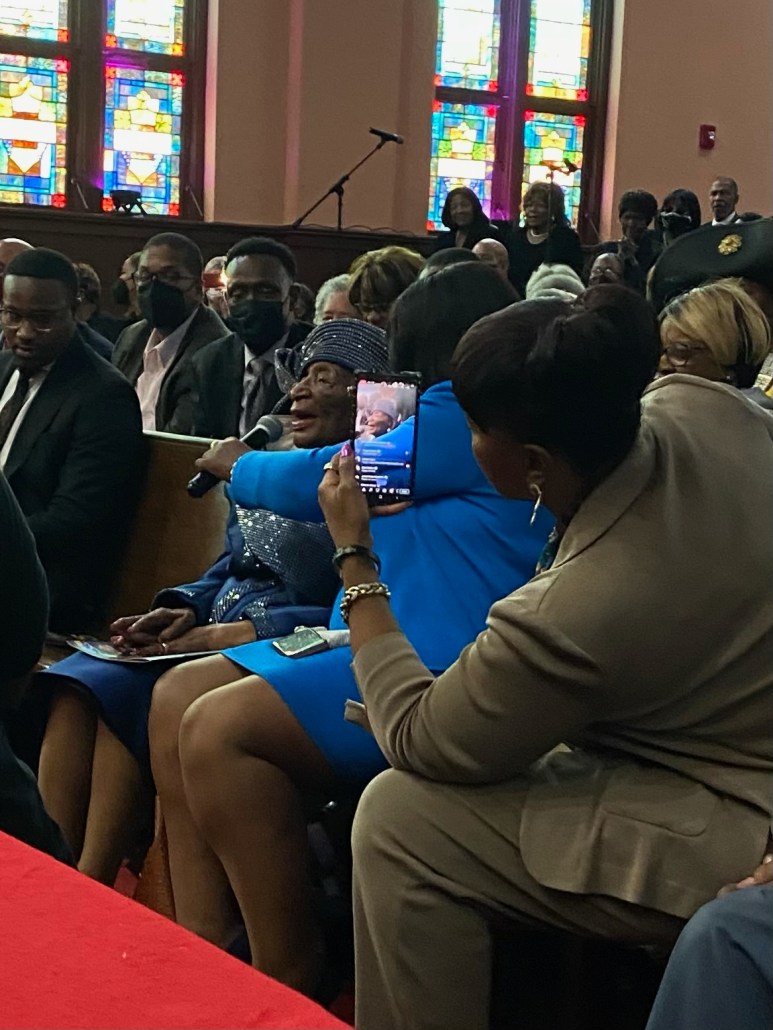 Bernice King captures her Aunt Christina singing “If I can Help Somebody” at the end of the 95th birthday celebration. (Photo by Sue Ross.)

Charlie Loudermilk and Andrew Young laugh it up at an event in 2013. (Photo by John Glenn of J Glenn Photography.)