I had never appreciated the reporting chops of Celestine Sibley until I became her target.

As a budding journalist at the Atlanta Journal-Constitution, I had long admired the homespun writing talents of Sibley – her ability to tell heartfelt tales of the ordinary man or woman, bringing them alive with extraordinary stories bridging our humanity.

The Atlanta Press Club inducted the late Celestine Sibley into its Hall of Fame on Friday, Nov. 7 along with NBC’s Tom Brokaw, WXIA’s Brenda Wood and Claude Sitton, who covered the civil rights movement for the New York Times out of Atlanta during the 1960s.

The night brought back so many memories of Celestine Sibley, a mentor to me and so many others at the newspaper with her generosity of spirit.

One of my most vivid memories was in 1991 when I became the newspaper’s first woman business columnist.

I had been asked to speak to the Kiwanis Club of Atlanta in mid-year. And because Celestine Sibley was a member, she told me she would be introducing me and that we should visit before the talk.

A few weeks before the scheduled speech, some of my newspaper colleagues told me: “Celestine was asking me questions about you.” 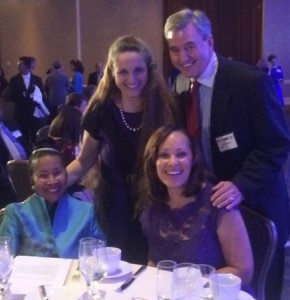 It didn’t take long for me to realize I was in trouble. I have had a colorful past that can be described as being a bit on the wild side, and many of friends knew way too much about me.

For example, my primary mode of long-distance transportation during the mid-1970s had been hitch-hiking on 18-wheelers or on the open road – not quite the lifestyle of a serious business columnist.

So when my friend, Doug Monroe, then the traffic columnist penning the Monroe Drive column, told me that Celestine had been asking him all sorts of questions, I pleaded: “You didn’t tell her about my hitch-hiking?”

“Oh she knew all about that,” Doug answered.

As the day of my Kiwanis talk approached, the more nervous I got – not about my talk but about Celestine’s introduction. She still had not asked me for my bio or to visit with me.

Instead, she had conducted a deep dive into my past that would have made any investigative journalist proud.

Of course, she was kind and gracious in her introduction – without sugar-coating my past. She told a story of how I had been suspended for three days at Grady High School for walking barefoot in the halls after school while working on the newspaper.

But she finished the story with an ending I had never heard before. Somehow she had found out that my mother had gone to see the principal with this message: “You worry about Maria’s mind, and I will worry about her feet.”

Who else other than Celestine Sibley could have shared a most personal unknown story about your life during what should have been a routine, read-a-bio, introduction?

There were other great memories. When Atlanta hosted the vice presidential debate on Oct. 13, 1992 between incumbent Republican Dan Quayle, Democrat Al Gore and Independent James Stockdale on the Georgia Tech campus, I went with Celestine and her husband Jack Strong. It felt so affirming to be sharing that historical moment with the two of them.

Another time, I remember riding on the elevator with Celestine, and she had just finished reading the biography of Grace Hamilton, the first African-American woman elected to the Georgia General Assembly.

“She was a really good woman,” said Sibley, who had known Hamilton well. And then with a mischievous twinkle in her eye, she said: “Good people make for boring biographies.”

I probably have never felt more validated by a mentor than I did when Celestine wrote an Atlanta Journal-Constitution column on March 14, 1996 based on a story I had written about plans for the Federal Reserve Bank of Atlanta to relocate from downtown to Midtown.

My friend, the beautiful and wise Maria Saporta, who writes a business column, had a piece the other day about the Federal Reserve Bank’s plans for its new building in the 10th Street area.

For Celestine to call me wise and beautiful? But read on. That column captured the special bond between the AJC and the Federal Reserve as well as the neighborhood shopping district that once existed in the heart of Midtown.

To begin with, we hate to lose the Feds as our next-door neighbors here on Marietta Street. I’ll never forget the cold day in February 1974 when we had to raise $700,000 to ransom our kidnapped editor, Reg Murphy. Even a big newspaper doesn’t keep that much money lying around in the pin tray on the dresser, so our publisher called the Feds, and like a good neighbor bringing a cup of sugar, one of their executives came to the back door and handed us the ransom money. Those of us who were following the progress of the kidnapping – as much as the FBI would let us – choked up over the neighborliness of the Feds, just as we choked up when our managing editor, Jim Minter, picked up the sack of money and embarked, as the kidnapper directed, in his shirt sleeves for a cold open Jeep ride up Ga. 400 to deliver the money.

Now the Feds are talking about a Midtown location, where they will put l,000 to 1,200 of their employees. It’s going to be big and grand (Maria called the plans “grandiose”), and those of us who knew 10th Street before they called it Midtown worry. Is it going to be so grand that we’ll not recognize a blooming thing that’s left of the old neighborhood we loved?

Gosh, we didn’t know all that when we shopped for groceries there or trailed our children through Kress and Woolworth’s or bought paint at King Hardware. We didn’t know it was elite when we went to the 10th Street theater or treated ourselves to a corned beef sandwich at the Roxy deli or waited while the shoe repairman put new taps on our heels.

It was the ultimate in convenient neighborhoods. You could walk anywhere you needed to go, including fruit stands and ice cream parlors and even toward the end, a nightclub. For a time, the Atlanta Public Library had a branch there, the post office was there and an elementary school attended by many distinguished Atlanta citizens, including Margaret Mitchell, was a block and a half away.

That column is only one of thousands Celestine wrote during her decades in the newspaper industry.

Through her columns, we learned about Atlanta — its past, its present, about its people – known and unknown, about life’s lessons mixed with love, loss, pain, comfort, resolve and perseverance.

One of the most poignant memories I have of Celestine is one day when we were walking to the Kiwanis Club – which then held its meetings at the Top of the Mart (Merchandise Mart). We had a special route that took us through John Portman’s buildings – up an escalator next to floor to ceiling mirrors. I said something about how appreciated an opportunity to glance in the mirror to make sure my hair wasn’t a mess.

I was shocked. Here was one of the most beautiful women I had ever met, and I couldn’t believe that she didn’t see how her inner beauty encapsulated her total being. To this day, that memory brings tears to my eyes.

For those of us who were lucky enough to know her – either in life or through her words – she taught us about ourselves – using her insights as pathways for our own lives.

And in case you were wondering, her autobiography “Turned Funny,” is anything but boring.

Atlanta Press Club celebrates its 50th anniversary on Nov. 7 with all its HOF inductees and presidents – past and present