By Maria Saporta and Amy Wenk
As published in the Atlanta Business Chronicle on November 13, 2015

The vision to reinvest in Centennial Olympic Park as it nears its 20th anniversary has just received a major boost with a $10 million donation from the Robert W. Woodruff Foundation.

The Woodruff grant is the lead gift in a $25 million campaign that’s being launched by the Georgia World Congress Center. A majority of the campaign ­— $13 million — will go towards the acquisition and demolition of the Metro Atlanta Chamber building. 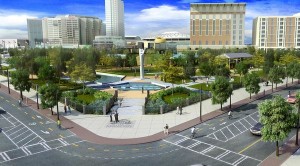 The land underneath the Chamber building will be converted into additional park space, and it will open up new vistas towards the Georgia World Congress Center and the College Football Hall of Fame.

“It is the legacy venue from the Centennial Olympic Games,” said Frank Poe, executive director of the Georgia World Congress Center. “As the caretakers responsible for the operation and upkeep of the park, we have a great sense of pride in making sure this legacy continues into the future. It is time to refresh the park. And it puts a great deal of responsibility on us to reinvest in that legacy.”

Centennial Olympic Park, which was almost an afterthought after Atlanta won the 1996 Summer Olympics in 1990, was designed to be a focal point during the Games. Since the opening, it has helped spark billions of dollars of investment around the edges of the park.

Billy Payne, who birthed the effort of both Atlanta’s Olympic bid and Centennial Olympic Park, is enthusiastically endorsing plans to reinvest in downtown’s largest green space. 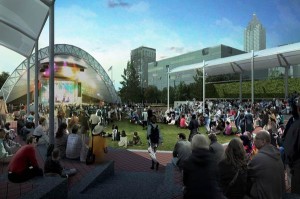 “I am very excited about the current plan to significantly improve the greatest physical legacy of the Centennial Olympic Games — Centennial Olympic Park,” Payne wrote in an email, listing all the “impressive redevelopment” in downtown since the park opened — Philips Arena, the College Football Hall of Fame, the Georgia Aquarium, the Children’s Museum, the Center for Civil and Human Rights and the World Of Coke, among others.

“So after these 20 years, it is important and proper that we once again turn our attention to the improvement of the park so that it will continue to be the magnet that will drive future positive development for our downtown,” Payne added. “I am therefore happy to be of whatever assistance I can be to the Georgia World Congress Center in their efforts to acquire the funds to significantly improve the park.”

In addition to acquiring the Metro Atlanta Chamber building, the campaign’s public portion will include a new brick-buying program — building upon the highly successful effort done 20 years ago when 487,000 bricks were purchased.

The major features of the campaign will include:

The conversion of International Boulevard into a grand pedestrian plaza is expected to cost about $2 million.

Other improvements around the park also are being planned for the 20th anniversary. For example, the GWCC and the PATH Foundation are working to develop a “Bike Depot” between the park and the Georgia Aquarium.

David Eidson, president and CEO of fundraising consulting firm Coxe, Curry & Associates, said they had originally floated a $46 million feasibility study that included the purchase of unidentified property around the park.

“The philanthropic community was very supportive of the campaign, but it did not have a lot of interest in funding land acquisition,” Eidson said, explaining why the campaign goal is now $25 million.

Poe said that GWCC is looking at different ways to celebrate the 20th anniversary of the Olympic Games by possibly creating a series of temporary historical pavilions to help Atlanta — both its residents and its visitors — remember this pivotal moment in the city’s past.

“The park is the most significant tangible legacy of the Centennial Games,” said Russ Hardin, president of the Woodruff Foundation and several other family-related foundations. “When Billy Payne conceived the idea, there was precious little time to pull it off.

“Genuine Parts Co. made an initial investment of land, Home Depot stepped up with a brick campaign, the Woodruff, Whitehead and Evans foundations and others contributed money, and the Georgia World Congress Center and the state of Georgia made it a success,” Hardin continued.

In all, the Woodruff Foundation, Joseph B. Whitehead Foundation and the Lettie Pate Whitehead Evans Foundation donated a total of $38 million to the original effort to establish the park, which cost about $60 million to develop.

“Collectively, we took on an audacious project and made it happen,” Hardin said. “Twenty years later, the Woodruff Foundation is pleased to make another round of investment in the park. It is not just a handsome park, but it is a visible reminder of a proud moment in our history, and of what we can do when the private and public sector work together.”

Poe said that since the inception of the park, the GWCC has invested more than $45 million in maintaining and operating the public green space. The GWCC also has committed a total of $2.5 million towards the $25 million campaign.

Poe said the GWCC has until Dec. 31 to exercise its option to buy the Metro Atlanta Chamber building. The public campaign launch and the brick buying program will begin in January.

The goal is to complete the campaign in August 2016, which will mark the 20th anniversary of the closing of the Olympic Games.

Construction is expected to begin in late 2016 and take about two years.