Movement is afoot at the massive Centennial Yards development downtown.

Centennial Yards will hold its first ground-breaking ceremony on the new construction of two major buildings – a 292-room hotel and a 304-unit residential building – on Thursday at 1 p.m. Atlanta Mayor Andre Dickens and Brian McGowan, president of Centennial Yards Co., will headline the ceremony. 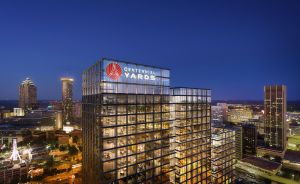 The other significant development is more symbolic. Centennial Yards has unveiled its new branding, which harkens back to the founding of Atlanta on the 50-acre site where the $5 billion development is being planned. Most recently known as The Gulch, the location is where the three railroad lines intersected, leading to the founding of Atlanta in the 1840s.

“Our new visual identity emphasizes Centennial Yards’ connection to Atlanta’s birth and now, rebirth,” said Brian McGowan, president of Centennial Yards Co. “We felt it was the perfect time to reveal this exciting new chapter of our story before breaking ground on our first new buildings.”

The 292-room will be a full-service boutique operation that will rise 18 floors from the viaduct level with parking and loading below. It will be adjacent to Mercedes Benz Stadium and State Farm Arena, and it will feature restaurants, bars, a pool deck and a ballroom of more than 8,000 square feet.

The 304-unit apartment tower also will rise 18 floors from the viaduct level with underground parking and loading. It will have one-, two- and three-bedroom units with a fitness center, a pool, multiple lounges, on-site co-working spaces and a dog run. 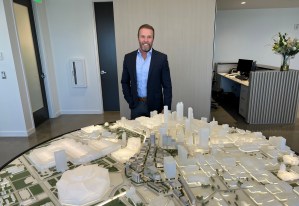 The architects for the two buildings are TVS and Goode Van Slyke with TVS leading the interior design. The idea behind the development is to create a safe, walkable and entertaining environment for both residents and visitors.

The timing of the ground-breaking and the unveiling of the new logo is not a coincidence. The logo features the original Circle Wye railroad junction, which is still active today at the base of the Centennial Yards development.

“The logo was inspired by the original railroad junction that’s been active on the site for over 175 years,” said Brandon Sutton, vice president of marketing and communications, said in a statement. “If you look at historical maps of the city, the Circle Wye forms the shape of an ‘A.’”

The logo also depicts the downtown street grid that was formed by the three rail lines. Streets paralleled the rail lines, which is why Atlanta has so many triangular blocks.

“All the elements of the logo were intentional and connect to Atlanta’s history as a hub of innovation,” Sutton added.

Steve Koonin, CEO of the Atlanta Hawks, is an Atlanta native who sees how transforming downtown will also transform the Atlanta fan experience.

“Between State Farm Arena and Mercedes-Benz Stadium, there are almost 300 events a year, in addition to a steady flow of large conventions in the Georgia World Congress Center,” Koonin said. “In this immediate area, there is an abundance of attractions to visit during the day, but not enough places to eat, drink and socialize at night. I believe Centennial Yards will be a place where people will come before, during and after games, concerts, conventions and other events as part of their entertainment plan.”

Richard Leslie, a brand development specialist with deep ties to Atlanta who consulted on the rebrand project with Centennial Yards felt it was important to pay tribute to the significance of the site to Atlanta’s history.”

“Atlanta has always been a city of progress and the very location on which Centennial Yards is being built played a large role in beginning that reputation for innovation,” Leslie said. “The new identity system was designed to represent that valuable heritage.”

The new design also elected a color system that represents Atlanta in many ways.

“The color red is analogous with Atlanta for multiple reasons,” McGowan said. “The phoenix rising from the flames is a defining feature of the seal for the City of Atlanta, and red is prominent in many beloved brands that hail from Atlanta, and especially our neighbors, the Atlanta Hawks and State Farm Arena, the Atlanta Falcons and Atlanta United. So it felt natural to integrate red into the Centennial Yards visual identity system.”