The National Center for Civil and Human Rights revealed a new scaled-down, economically-sustainable design for what will become a signature attraction for Atlanta.

The new design was unveiled Monday evening at the W Hotel downtown, which is only a couple of blocks away from the site of the Center.

The Center will no longer have a design with the imagery of two interlocking arms — a symbol of the Civil Rights movement and a vision that won a competitive design competition in 2009.

The new design, however, was done by the same architectural team — North Carolina-based Freelon Group and HOK-Atlanta — that had won the competition three years ago.

The new design calls for a three-story structure that will be between 35,000 and 42,000 square feet. It will have a about 18,000 square feet of exhibit space — a gallery to display the papers of Martin Luther King Jr. on the lowest level (the most secure spot in the building), a Civil Rights gallery on the second and third levels, and a Human Rights gallery also on the third level. 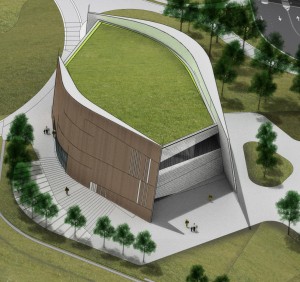 The project is being built for $70 million — the amount of money that the Center has already raised for construction, exhibits and acquisition of special collections. That includes $5 million that is being set aside for an endowment.

Not only will the Center open with no debt; the attraction will be self-sustaining from day one, according to Doug Shipman, the CEO of the Center who has been working on this project since 2005.

“We have raised the funds to build the first phase,” Shipman said in an interview. “We plan to open on Memorial Day, 2014.”

The Center will overlook Pemberton Place and will be on the same block as the Georgia Aquarium and the World of Coca-Cola — across from Centennial Olympic Park. The ground-breaking for the Center will be on June 27, and it is expected to take almost two years to develop.

“Over the next two years, we will continue to fundraise around programs, endowment and other opportunities for partnerships,” Shipman added. 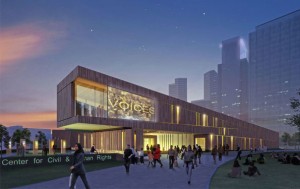 Original design for National Center for Civil and Human Rights

The Center also has envisioned two other expansions — one would be to house traveling and temporary exhibitions and the other would be for an auditorium for more formal events. Each expansion is expected to cost between $10 million and $15 million.

The Center is being envisioned to be as much as a venue to showcase current civil and human rights issues as it is to highlight the extraordinary history that occurred in Atlanta, the South, the nation and around the world.

“It’s a living attraction, so we wanted to open something that’s vibrant from the get go,” Shipman said. “We wanted to go with a phased approach that could accomplish our mission. The board has appropriately responded to a tough economic environment and decided to build something that’s going to be successful.”

At the unveiling event on Monday, Center officials also announced that the accounting firm of Ernst & Young is donating $50,000 to help support programs in the facility.

The original design called for a $100 million attraction with an additional $25 million endowment that would have had a total of 90,000 square feet. That was scaled down in 2010 to build a 60,000 square foot attraction for $85 million with another $15 million to go towards an endowment.

Both those plans would have allowed the Center to open with no debt, but their operations would not have been 100 percent self-sustaining. They had anticipated that about 20 percent of the operating costs would have been covered by an annual membership campaign.

The new design should be able to cover all its operating costs with the Center’s ticket and event revenues.