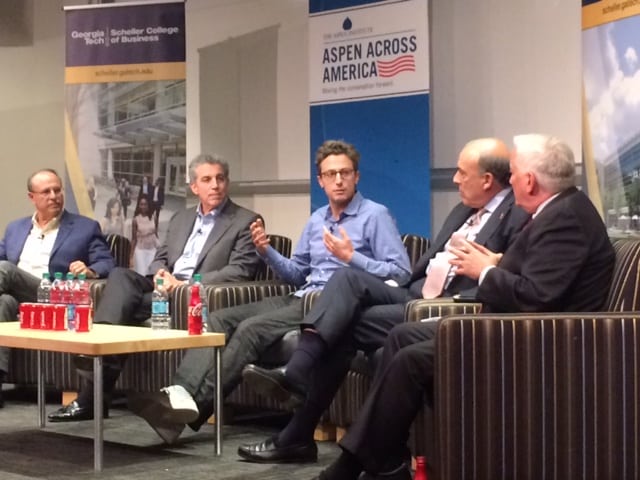 When it comes to running an innovative company, the consumer is king, according to a prestigious panel of business leaders speaking Wednesday evening at Georgia Tech’s Scheller College of Business.

The discussion was moderated by the Aspen Institute’s president and CEO – Walter Isaacson.

He asked Coca-Cola CEO Muhtar Kent how the company decides what new products to introduce.

For 100 years, the Coca-Cola Co. basically had one brand – Coke.

“In the last three years, we have 3,500 products and 550 brands,” Kent said. “In essence, you have to follow the consumer’s passion. When we think about innovation and how to innovate, the best ideas are outside our four walls.” 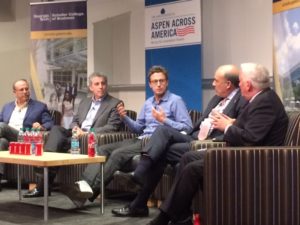 Coca-Cola has established innovation incubators in Israel and Mexico, and the innovation can be marketing, logistics as well as products. For example, Kent pointed to the green Dasani bottle, which is made with plant materials. But Kent still is not satisfied.

“We have got to dream of a bottle where somebody can drink from the bottle, and then the consumer can eat the bottle,” Kent said, getting a laugh from the audience of students and invited guests at the business school’s LeCraw auditorium.

Jonah Peretti, the CEO of BuzzFeed who was one of the co-founders of the Huffington Post, began his career as a teacher in New Orleans.

“I never planned to be in business,” Peretti said, adding he realized that through the Internet, one could reach a global audience without needing an editor or a printing press. “You can learn from the audience about what they like. Media can be part of people’s lives.”

Isaacson asked Peretti whether the notion of community through new media was being realized.

“I think what you are seeing now is a conversion of media and content,” he answered. “It’s all about the things that you share.”

Greg Coleman, president of BuzzFeed, got to know Peretti at the Huffington Post. Before that he had been senior vice president of

Reader’s Digest Association. It was there where he learned some of the do’s and don’ts of business and innovation.

“Reader’s Digest had 60 million names in its database. We were on it years before,” Coleman said. “In the mid-1990s, when I was at Reader’s Digest, we had $1.5 billion in cash in the bank. We went public in 1990. What did we do? We bought our own stock. We had this moment. We cut off a lifeline to the next new thing. It became a lot more difficult to acquire (another company). I was frustrated by that.”

Craig Menear, CEO of the Home Depot, said he knows that most of the time he’s not a change agent.

“Surround yourself with change agents,” Menear said. “In general, people don’t like change. Find people who can.”

Asked about Amazon as competition, Menear said he believed it was better for Home Depot to develop its internal digital platform.

“Personally I don’t believe it will shift entirely to the digital world,” Menear said. “The millennials tell us that bricks and mortar are still hugely important.”

“It’s about having the courage and having the confidence to have millennials around you,” Kent said. “Make sure you stay ahead of consumer choices. You have to create enough of an eco-system around you.”

So how does one reach the consumer?

“We are moving from a world of mass marketing to mass personalization, and it’s technology-enabled,” Kent said. “Every individual starts a trend everyday. We have a hub that listens to everything that is trending around the world with our 550 brands.”

Menear also said the consumer is tops at Home Depot

“It all begins and ends with the customer,” Menear said. “If you are focused on just quarterly results, you are not going to survive.”

Businesses also have to consider more than their shareholders.

Isaacson asked Peretti what he thought would disrupt BuzzFeed.

“You don’t know what it’s going to be,” Peretti said. “You have to be continually looking and reinvesting for a longer-time.”