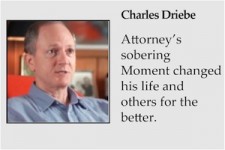 When Charles Driebe’s mom invited him to a mysterious meeting at her house in 1990, the 33-year-old Atlanta attorney had no idea that one Moment would alter his life – and the lives of many other people who struggle daily with addiction – for the better.

Addiction to alcohol or other mood-altering substances afflicts more than 23 million Americans. For the friends or family members I know who wrestle with these issues, I often give one simple piece of advice: “Call my friend Charles. He’ll point you in the right direction.”

Before his Moment in 1990, Charles was considered by most people’s standards to be a successful man. “I had a career as a successful attorney – at least it appeared successful on the outside,” he told us in our accompanying Moments video. “I was making money and living well.”

But Charles learned – as many do – that making money and appearing successful to others doesn’t always satisfy the innate yearning for a more fulfilling life. “I didn’t feel successful on the inside and I wasn’t happy with my life,” he said.

His internal struggle, not apparent to close friends at the time, led him down a path that is all too often a destructive alternative for people in his position. “I began to medicate myself with substances,” he said.

That self-medication led Charles to a dependency that began to consume his life, leading him to join the ranks of millions of others who have suffered with alcoholism and addiction.

On Saturday, January 13, 1990, Charles walked into his mother’s house to find a dozen of his friends, family and loved ones who unbeknownst to him had gathered for an intervention. Charles sat and listened as his loved ones took turns telling him how they had been watching him slowly change for the worse. When they finished, they collectively made a plea to Charles: “Get some help.”

“I could ignore them and retreat and continue doing what I was doing,” he said. “Or I could listen to them and take action.”

The trying decision is one to which those suffering the pain of addiction often respond with a natural instinct to deny, defend and dodge. Many will give into the desire to flee and react with anger, saying, “Leave me alone.” Charles felt those reactions welling up inside of him that night in 1990, but through the love and concern he felt from the others in the room, he began to accept that wasn’t his only option. As his supporters surrounded him in his mother’s house, he made the decision to face the truth.

Today, Charles returns his gratitude for his sobriety by ministering to others who face the darkness that once overtook him. Through the years, people have privately shared with me that “Charles helped me turn my life around.”

Charles now works as an entertainment lawyer and music manager with the company he founded in 1998, Blind Ambition Management. His company provides a full range of services to its music clients, from career management to legal assistance. Clients include the multiple-Grammy-award-winning gospel legends the Blind Boys of Alabama, as well as other Grammy-nominated artists like blues/soul powerhouse Ruthie Foster and songwriting troubadour Steve Forbert.

His interest in music goes back to childhood, when he visited record shops from Buckhead to Auburn Avenue. In law school, he helped a brand new group named R.E.M. land an early Atlanta gig at a bar in Buckhead named Hedgens. I was there that night and remember the group singing “Happy Birthday” to Charles, who arranged for them to collect a princely $200 fee.

With millions of Americans plagued by addictions such as Charles faced, the cost of alcohol abuse is estimated to cost the nation’s economy $223.5 billion a year. This cost is derived from the percentage of lost workplace productivity due to the various illnesses – minor and severe – brought on by addiction. However, the dollar amount pales in comparison to the physical and emotional burden cast by addiction. Those afflicted with addictive issues are only one fraction of the damage when you take into consideration the family, friends and co-workers who are also affected by the destructive behavior.

“I’ve now been sober 22 years and I’ve thanked each of the people that were in that room for helping me get on to this course,” Charles said. For many years after his Moment, he would call them on the anniversary of his intervention and express his appreciation for their fortitude in being honest with him.

“I would say to anyone in that situation, that the lesson I learned is that the pain of changing is less than the pain of staying the same – that you can handle the change – and you will come out the other side in a better place.” 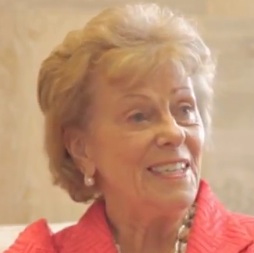 Next week in Moments: Alana Shepherd

Next week in Moments: Alana Shepherd, who “received the call from hell,” then built a rehabilitative hospital to help thousands.