CHARLESTON, S.C. – The sidewalks along the historic streets of Charleston are lined with people – strolling, shopping, people-watching, enjoying the sights, sounds and smells of an intentional city.

Intentional? Yes. One can immediately feel that downtown Charleston is a place that has had leadership with the intention of turning the seaside town into a world-class city. 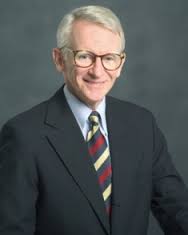 The architect behind creating an intentional world-class city is Joe Riley, who was elected as the city’s mayor in December 1975.

Today, more than 39 years later, Mayor Riley is closing in on his last year in office – after having been recognized nationally and internationally as one of the leading mayors in the country.

Just last July, the New York Times had a feature story with the headline: “Is Joe Riley of Charleston the Most Loved Politician in America?” by journalist Frank Bruni.

On Thursday, January 9, Riley is coming to Atlanta to participate in the “Views from the Top” breakfast program titled: “A Tale of Two Cities: Atlanta and Charleston.” The program, which is being put on by Georgia State University’s Association of Real Estate Alumni, will be held at the Cherokee Town Club.

Program invite for Views from the Top (click to enlarge)

In addition to Mayor Riley, who will be featured throughout the program, the event will include an interview with Atlanta City Council President Ceasar Mitchell.

It also will have a panel with three real estate professionals who have knowledge of both Charleston and Atlanta: David Allman, president of Regent Partners, who is developing a major mixed-use development in the Upper King district; Lance Patterson with the Patterson Real Estate Advisory Group, who is helping provide financing for the renovation of the Cigar Factory in Charleston; and T. Scott Smith, president of South Carolina-based WRS Inc., which has a contract to purchase Underground Atlanta for $25.75 million.

In the interest of full disclosure, I will be serving as moderator of the event.

It was in that spirit that I decided I needed to visit Charleston, a place I had not visited for decades.

Whenever I go to another city, I always put on the same glasses. What can we in Atlanta learn from the lessons and successful experiences that one sees in other places?

Charleston provides many of those lessons – beginning with words that Mayor Riley shared with me before I visited his beautiful town.

“The public realm rules,” Riley said. “I think everything we do in the city now and going forward should reinforce the public realm – from the trees, the sidewalks, the parks to the placement of the buildings.”

Riley went on to say that architects and developers all too often focus on how a building might look on the skyline, but it is most important to focus the attention on how people view a building at street level.

Obviously there are striking differences between Atlanta and Charleston when it comes to size and scale.

Charleston shows the wisdom of thinking small – of focusing on the detail of how a city looks and feels from an intimate, pedestrian point of view. It is fortunate that so many of its ornate historic buildings remain. It is also fortunate that much of its new development complements its past rather than overshadowing it or destroying it altogether – something Atlanta has done all too often.

Another striking difference that parallels the wisdom of thinking small is the sense that Charleston has not let the automobile totally dictate its urban design. Most of the Atlanta region, especially the areas that have been developed in the last 50 years, have been designed for an auto-centric world. Only now is there growing sensitivity to the need to design and create a city that works for people on a human scale rather than one for cars.

Mayor Riley calls it the public realm. One can call it public urban spaces designed for people rather than for cars. All of those contribute to elements that make a city feel world-class.

Leadership like Mayor Riley has provided in Charleston would not be possible in Atlanta – which has term limits for its mayors.

Shortly after he was elected in 1975, Riley began promoting the concept of an annual Spoleto performing arts festival, which held its debut in 1977, an event that helped put Charleston on an international cultural map.

Riley told the New York Times that the event “forced the city to accept the responsibility of putting on something world-class.” As he saw Spoleto, it could become the instrument to raise the city’s civic psychology.

“You need to commit a city to excellence,” Riley told the New York Times, “and the arts expose you to that.”

After 39 years in office, it is a time for Mayor Riley to reflect on what makes a great city really great.

An article in Charleston Magazine – “Mayor Joe: One Year To Go” (November, 2014), took stock in Riley’s tenure and previewed all the plans he still wants to accomplish before leaving office in early 2016.

“If there’s a unifying theme, a narrative thread, that runs through Joe Riley’s 40-year reign, it’s his belief that cities are the heart of a just democracy,” wrote journalist Stephanie Hunt in Charleston Magazine. “That because the urban experience brings people of all walks of life together, a vibrant public realm creates the essence and soul of community, of citizenship. More simply, he believes in place making. He avows beauty, access, excellence. Mediocrity: not so much.”

Later in the article, Riley said virtually the same thing in his own words recalling when he was newly-elected as mayor visiting England and Germany.

“I was young in this j I was looking for, but in those cities I saw the value of the public realm, the parks and boulevards, places where people shared things together.”

A charming building on one of Charleston’s side streets

Charleston kept many of its historic buildings, which adds to its charms

Previous Article
Local owners of Atlanta Hawks aim to play a role in new ownership group
Next Article
Atlanta BeltLine and APS should unify, not divide, our city – for all our sakes