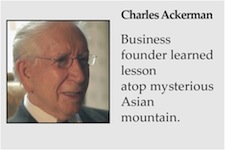 Real Estate Developer and Founder of Ackerman Security Systems, Charles Ackerman, had his Moment on a trip to a remote Asian mountain range when he happened upon a third-world village.

While preparing to take a flight from London, Charlie came across a book on the Zanskar Range in India and became intrigued. In recorded history, only 100 people had been to the mysterious mountains. Upon asking others about the mountains, he found that it was even more elusive than he originally thought.

“We’ve asked people, ‘have you ever heard of Zanskar?’” Charlie said in our accompanying Moments video. “And they would say, ‘No, there isn’t such place.’ ”

He recruited a friend who enjoyed adventurous outdoor expeditions as much as he did, and the two took four months off of work for their journey to Zanskar.

While traveling across India, hiking farther into the mountains that nearly bordered Tibet, Charlie and his friend came upon a village that at first seemed small and primal. It would prove to mean much more than that for Charlie.

“We were out in the middle of nowhere, hiking along, and a man comes up to me,” he said. The man, dressed in simple farmer’s clothes, asked Charlie if he would help him find his missing goats.

Charlie thought the favor seemed odd, but soon learned the only source of revenue streams for the farmer’s village were goats and wheat. What at first seemed a small favor for Charlie to perform, the gesture meant everything to the farmer and his seemingly simple society.

In return, Charlie asked the farmer to do him a favor. “The winds are so high at night here we can’t sleep in our tents because they keep getting battered,” he said. “Do you mind if we sleep in your village?”

The farmer replied, “I’ll talk to my brother. He is the chief.” 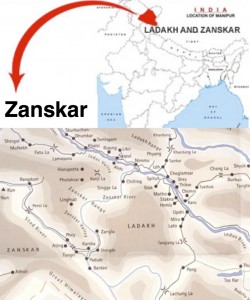 Charlie and his friend waited an hour for the farmer to return. Luckily, he brought good news. The visitors could stay in the village but with strict conditions: they had to stay in one designated spot and could not move beyond a line the farmer drew on the ground.

The two happily set up their tents just before dusk and stepped into one, opening a can of tuna fish and peas for dinner.

When they finished eating, Charlie opened the flap of the tent to let in some fresh mountain air. Expecting to see trees and stars outside their tent – they instead saw the entire village standing, waiting for the men to emerge.

The farmer stood among the other villagers, saying, “My village would like to ask you some questions.” He offered to translate the villagers’ questions into English if Charlie was willing to spend time providing answers. “I said, ‘absolutely’ – I didn’t realize it would take three or four hours to respond,” Charlie said.

The simple, agrarian villagers asked questions that were much more complex than he expected.

“They were intelligent questions,” Charlie said. “They were questions that had to do with the structure of their village, and their society and our society and how we lived.”

The villagers asked about American society and leadership roles – they were curious if our leaders were elected or born into their position. They asked about inheritance, specifically who inherits possessions and who takes over a household when the elderly pass in American society. The villagers asked if Charlie’s was patriarchal or a matriarchal society.

For several hours, the villagers patiently relayed questions through the farmer who carefully translated them to Charlie, whose responses were then translated back to the villagers.

Charlie and his friend left the village the next morning and hiked deeper into the mountain range, soon joining the small group of people in history who had heard of – and actually visited – Zanskar. Since then, Charlie has visited many third-world countries and, each time, he is reminded of the very present – albeit different – intelligence possessed by these societies so different from our own.

Though often unknown in these third-world countries, Charlie is well known in Atlanta not only for his 1976 founding of the pioneering Ackerman Security Systems. but also his 1967 founding and continued ownership of the highly successful Ackerman & Co., a real estate services and investment firm that employs 100 people today.

Recently, Charlie was inducted into the Hall of Distinction for his achievements in real estate by the Real Estate Investment Advisory Council’s Southeast chapter and Georgia State University’s J. Mack Robinson College of Business. The award recognized his numerous commercial real estate projects through the years that helped craft the towering Atlanta skyline and other cities around the world.

Charlie’s business success paralleled his zeal to explore far corners of the world and to discover unexpected learning opportunities.

Years after his Zanskar Moment, Charlie flew to Washington, D.C., for a friend’s wedding. Upon arrival, he was greeted by the groom, who introduced him to a woman who specifically asked to speak with Charlie.

“You and I have one very unusual thing in common,” the much taller woman excitedly divulged to Charlie. “We’ve both been to Zanskar!”

“I don’t believe it,” Charlie said. “How did you get there?”

“My husband wrote the book that you found in that old bookstore in London when you read about and first learned about Zanskar,” she said. 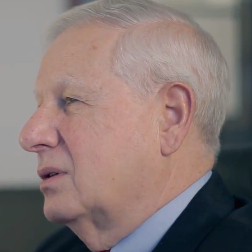 Next week in Moments: Solon Patterson

Next week in Moments/Season Two Finale: Solon Patterson, whose life’s mission in retirement is to reunite two religions that split nearly 1,000 years ago.