In 2021, CHaRm recycled or repurposed 2,185 tons of material. (Photo courtesy of Live Thrive.)

It’s pretty typical these days to toss your plastic container or glass bottle in the recycling bin, but other items likely don’t get the same treatment. Before you throw your styrofoam cooler or bin of dead batteries into the trash, though, consider giving those hard-to-recycle items a new life through a local Atlanta facility. 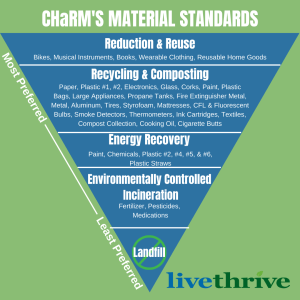 Live Thrive works with local nonprofits and companies to reuse or recycle 96 percent of items brought to the facility. (Courtesy of Live Thrive.)

The Center for Hard to Recycle Materials (CHaRM) is a permanent drop-off facility in Peoplestown, managed by nonprofit Live Thrive, that diverts household hazardous waste and other difficult-to-recycle items from metro’s landfills and water systems.

Founder and Executive Director Peggy Ratcliffe started Live Thrive in 2009 and opened the CHaRM facility in 2015 because she saw a hole in Atlanta’s recycling and waste services. While cleaning out her parents’ home after they passed away, Ratcliffe realized how many everyday items could be repurposed rather than tossed in the landfill.

And the drop-off facility, located at 1110 Hill Street SE, is growing in popularity. In 2021 alone, CHaRM saw around 62,680 visitors, and recycled and repurposed 4.8 million pounds of material.

“My father was a gardener and had pesticides and herbicides that I knew shouldn’t be put in the curbside bin,” Ratcliffe said. “So that sent me on a mission to find out what you’re supposed to do with these things in the City of Atlanta.” 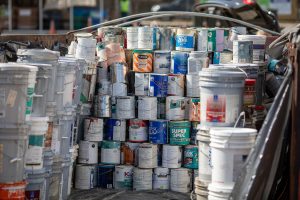 Paint dropped off at CHaRM is sent to Clean Harbors, a company that turns paint and most household chemicals into biofuels. (Photo courtesy of Live Thrive.)

What did she find? The city doesn’t have a system to accept household hazardous waste, items like paint and pesticides, but now refers residents to CHaRM’s services.

After starting Live Thrive, Ratcliffe saw that Atlantans wanted to be more eco-friendly, they were just lacking the resources.

“People really want to do the right thing. They just don’t know where or how,” she said. “I want this to be a place where someone could clean out their house and bring everything.”

CHaRM accepts almost everything, from musical instruments and old bikes to tires and mattresses. The nonprofit is clear about where the materials are going, which Ratcliffe said is critical for visitor trust, by including a list on their website that outlines the items’ trajectory.

“The confusion with recycling is the lack of transparency,” she said. “That’s why it’s really important that when you drop something off here, you can go to our website and find out where it went. We have a lot of people that have access to curbside recycling and still bring their materials here [for that reason.]”

The organization doesn’t accept any materials that they don’t have an outlet for, and everything besides hazardous waste is sent to local nonprofits and companies for redistribution or reprocessing.

Visitors can rest easy knowing their items will have a new life, as 96 percent of items brought to the facility are reused. In comparison, only 4.5 percent of plastic was recycled in 2018, according to the EPA, but was the second-highest item found in landfills.

With CHaRM, musical instruments and bikes are given to organizations that donate them to folks in need. Car tires — frequently dumped in local rivers and parks —  are made into mulch or a liquid that fills city potholes. By contrast, tires can take over 80 years to decompose in a landfill. 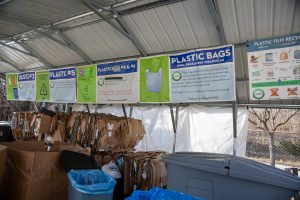 Folks can also bring their everyday recyclables like cardboard and plastics. (Photo courtesy of Live Thrive.)

CHaRM’s services aren’t limited to only hard-to-recycled materials — folks without recycling at home can drop off everyday items like plastic containers and aluminum cans. The facility is primarily geared towards residents but also offers its services to local entities like Delta, Cox Enterprises, State Farm Arena and nearby universities.

Through initiatives like the CHaRM Corporate Challenge and Do You Recycle Challenge, Live Thrive strives to educate Atlantans on the importance of recycling and repurposing items, including its benefit to our environment and local economy.

“The only way recycling works is if people fully understand,” Ratcliffe said. “We want to be good environmental stewards, but [folks should also] understand how many jobs this provides, that it stimulates our economy by recycling these materials. The more people we can reach to simplify the process, the more successful we’re going to be overall.”

For folks who aren’t quite sure where to start, Ratcliffe recommends starting with the Five Fab — five materials that will always be accepted from curbside pick-up as long as they’re clean, dry and not in a bag. These include paper, plastic one and two, aluminum, metal and cardboard.

If you’re looking for more tips or have items that you don’t know what to do with, visit Live Thrive’s website for more information.

Previous Article
‘Fantastic Beasts: The Secrets of Dumbledore’ – a hot mess
Next Article
It’s Time for Unite for Service Week!

How-to wrap up the festivities sustainably

Center for Hard to Recycle Materials, a zero-waste drop-off facility, comes to Decatur next year