Chase CEO at Morehouse: ‘If you don’t have character and culture, you are not going to be a leader’

Dimon spent nearly an hour answering relatively friendly questions from students from Morehouse and Atlanta’s other HBCUs about income disparities, diversity on Wall Street, trade with China trade and life lessons he could share.

And then the event ended with JPMorgan Chase awarding Morehouse College a total of $150,000 – $100,000 towards Morehouse’s software engineering department to upgrade its computer lab and $50,000 to the student financial fund to support student leaders and high academic achievement. 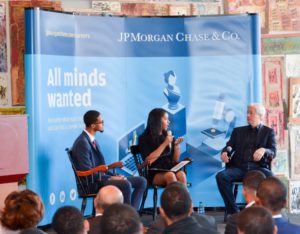 The purpose of the conversation quickly became clear. As part of its diversity initiative, Dimon would like to increase the number of blacks working at JPMorgan Chase.

Morehouse College already is a key academic partner for the firm – providing a fertile ground for new recruits. JPMorgan Chase & Co. (NYSE: JPM) is a sponsor of the Department of Business Administration and Economics.

In 2019, the college named JPMorgan Chase the top employer of Morehouse Men on Wall Street, highlighting how alumni are actively involved with on-campus initiatives.

Dimon told students the bank’s Advancing Black Pathways program is committed to hiring 4,000 black students over the next five years as apprentices, interns and entry-level analysts.

The two students who led the discussion with Dimon were case in point.

John “Trey” Bowers, president of the Morehouse Student Government, already has a job as an analyst for JPMorgan Chase. And Jordan Barefield, a student at Spelman College, spent her summer internship at the bank’s Houston office.

Bowers asked Dimon how the middle-class has fared since the Great Depression.

“Middle class income has been kind of level,” Dimon said. “Forty percent of Americans make $15 an hour or less; 15 percent make $10 or less. That’s not really a living wage.”

Dimon then added the nation “should find a way to have medical insurance for everyone.”

Dimon said Wall Street actually has a better record for diversity than some other sectors – mentioning real estate and private equity, but it could do better.

“It’s been 165 years since the Civil War,” Dimon said. “We should have parity, but we are far from it” mentioning the need to increase the number of women, Hispanics and blacks working for the company.

Many of the questions the students asked were about leadership, responsibility and advice.

“If you don’t have character and culture, you are not going to be a leader,” Dimon said, adding that he reads five newspapers every morning. Leadership is about “keeping yourself smart, taking care of yourself, having humility. The bigger job you have, the less you know.”

When he was asked about trade with China, Dimon said: “I don’t think we are going to have a super trade deal. I think it will be a smaller one…. If you had a real trade war break out, that would be terrible for the future of the world.”

Morehouse College President David Thomas was thrilled to welcome Dimon – someone he’s known for decades from their days at the Harvard’s Business School – to campus. 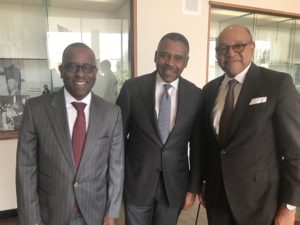 “Having someone of Jamie Dimon’s stature come to Morehouse sends a message to our students about how they are valued as talent for the best companies in the country,” said Thomas, who is pleased that JPMorgan Chase already has been an investor in the college.

In addition to the $150,000 announced on Friday, the bank has made a $640,000 investment in the ASCEND Atlanta initiative to increase access to capital, training and markets for minority entrepreneurs in the Atlanta area. The Morehouse College Entrepreneurship Center is the lead organization designing the training programs.

In all JPMorgan Chase has contributed more than $1 million to the initiative in the last two years.

But Thomas hopes this is just the beginning.

“I met with Jamie this morning to talk about JPMorgan investing in helping us build the foundation for the 21st Century,” Thomas said. “We are hoping there will be a much stronger relationship with JPMorgan Chase.”

Meanwhile, the bank will have job opportunities in metro Atlanta, where it has been in the market for 10 years. A couple of months ago, the bank opened a branch in Athens, and in two weeks it will open a branch in Savannah.

“We have 1,000 employees in more than 80 branches in metro Atlanta” said Michael Fusco, a spokesman for the bank. “In the next three years, we are going to add 40 new branches.”