Eighty-five percent of CHP's impact is through their therapeutic programming. (Photo courtesy of the Chastain Horse Park.)

A two-year-old with cerebral palsy learns how to sit up, another practices coordinating movement and speech, or increasing independence — these are all breakthroughs found in the therapeutic programming offered at the Chastain Horse Park (CHP).

CHP is a 90-year-old horse park situated on 15 acres in the City of Atlanta. One of only two urban horse parks in the U.S. — the second in Dallas — CHP provides primarily therapeutic rides and equine-assisted therapy, along with riding school and boarding. Through its therapeutic programming, the nonprofit offers mental and physical sessions with the 1,000+ pound gentle giants.

Thanks to a successful $9 million capital campaign, the organization recently broke ground on an expansion project to double its therapeutic impact. On Aug. 24, the CHP team hosted city leaders and local partners to celebrate the expansion, which will include a new Therapeutic Horsemanship Center.

“A lot of these kids have never seen a horse in their life, let alone touched one or built a relationship with a 1,200-pound animal,” Executive Director Trish Gross said. “We’re part of the fabric of the city and we’re very, very proud of that.”

The sessions are provided by licensed medical or behavioral health professionals conducting physical therapy, psychotherapy and speech-language pathology sessions to treat a variety of conditions, including autism, depression, PTSD, cerebral palsy, down syndrome and stroke recovery. 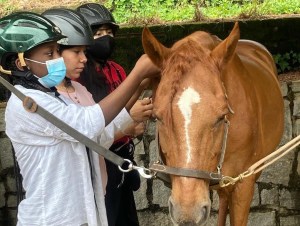 Spending time with animals can help calm the nervous system, offering a greater sense of well being. (Photo courtesy of the Chastain Horse Park.)

Horses are well-suited for both mental and physical therapy due to their intuitive, calm nature and the anatomical similarities between humans and horses. Most mental health sessions are off-saddle, like grooming, feeding and petting the horse.

“[Grooming entails] picking the hooves, then using a curry comb, hard brush and a soft brush,” Gross explained. “Those are all sequencing skills. To get a job bagging at Publix or Kroger, for example, you need to be able to repeatedly and independently execute a multi-step task. [Therapy] isn’t always mounted.”

For physical therapy, horseback riding can be therapeutic because the horse rhythmically moves the rider’s body in a way that closely resembles a human gait, helping improve flexibility, balance and muscle strength.

“The pelvis of a horse moves very similarly to the pelvis of a human. Let’s say you have cerebral palsy and walk with crutches,” Gross said. “When you get on the horse, that horse is moving the human pelvis on top of it, and [afterward,] your gait is significantly improved. It’s not perfect; It’s a long-distance race, but their gait is significantly improved. It’s really incredible.” 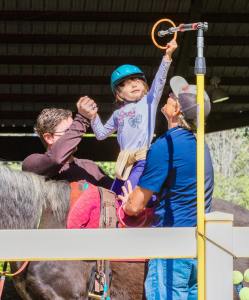 A physical therapy exercise to increase strength and coordination. (Photo courtesy of the Chastain Horse Park.)

Many of the participants see mental and physical benefits, including nine-year-old Alexander whose mom attributes his improved physical strength and self-confidence to riding at CHP.

She wrote, “If a nine-year-old child with disabilities can learn how to control a large, powerful animal while navigating an area of riders and horses, what can’t he do in life?”

As Atlanta’s sole urban horse park, the organization wants to ensure that folks of all income brackets can access the benefits of hippotherapy. Although the science is there, most insurance doesn’t cover horse-assisted therapy.

To help offset the costs, CHP provides scholarships to 36 percent of participants through partnerships with local schools and need-based organizations like Carver High School and Wellspring Living. The horse park also subsidizes 50 percent of every therapeutic session.

“[The therapeutic sessions] cost us twice as much as we charge. We do that because the correlation between poverty and disability is so very high,” Gross said. “We’re a small nonprofit in the whole scheme of things, but we have provided over one million dollars in subsidy and scholarship to residents of the City of Atlanta.” 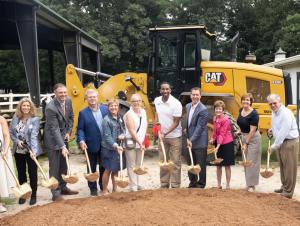 “Coming of age in Atlanta and the Adamsville neighborhood — a working-class neighborhood — the only time I saw horses was on TV or at a parade. But as I grew older, I started understanding the bigger role horses play in our world,” Dickens said. “I’m glad that here in Atlanta, we have this Chastain Horse Park with all these amazing horses. This is like a harbor in an urban landscape. It’s a wonderful amenity and the work that you do here has a tremendous, positive effect on our citizens and visitors.”

If you’d like to learn more about the services offered at the Chastain Horse Park, click here.

Previous Article
In hindsight, it seems obvious
Next Article
A redeveloped and revitalized Civic Center stirs our imagination