Cherishing Atlanta’s 1996 Olympics legacy before it has all disappeared

It takes 50 years for a structure to be eligible to get designated as an historic building.

At this rate we will have little to nothing left to designate to memorialize our Olympic history. 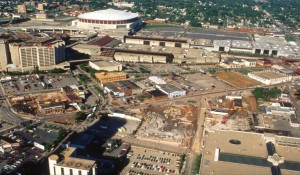 That point really hit home last week when Atlanta welcomed planners from around the country and the world at the American Planning Association convention.

A panel of people who had worked and observed Atlanta’s Olympics effort (Randy Roark – Corporation for Olympic Development in Atlanta; Tina Arbes – Atlanta Committee for the Olympic Games; Sian Llewellyn – Metropolitan Atlanta Olympic Games Authority; and yours truly) spoke of the legacy that remains.

Without a doubt, Centennial Olympic Park – which Llewellyn described as “an afterthought” – is Atlanta’s crowning Olympic jewel. The park has done more to transform downtown than any initiative in the past 30 years. 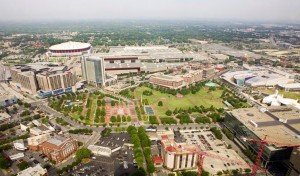 After – Centennial Olympic Park as it looks today (AECOM)

When Atlanta’s leaders returned from the spectacular Olympic Games in Barcelona in 1992, they realized the city was in dire need of a public gathering place in the heart of downtown. So a bunch of surface parking lot and dilapidated one-story buildings were magically replaced with a well-designed and well-maintained urban park.

But beyond Centennial Olympic Park with its five Olympic rings fountain and the natatorium at Georgia Tech, Atlanta seems determined to tear down nearly every major Olympics venue around town, and it hasn’t even been 20 years since we’ve hosted the 1996 Summer Olympic Games.

As someone who loved almost all of Atlanta’s Olympic experience, I find it sad how quickly we seem to be erasing the Olympics from our city’s memory.

In 2017, after the new Atlanta Falcons stadium opens, the Georgia Dome will be demolished. The Georgia Dome was the prime spot for several Olympic sports – primarily gymnastics. 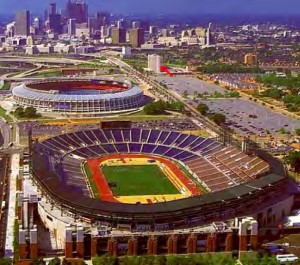 But perhaps the biggest void will be when Turner Field is removed from the city’s skyline. The baseball stadium was the Olympics $250 million gift to Atlanta.

The Olympic Stadium – where the opening and closing ceremonies were held and where all the track and field events were held – actually was designed to be a baseball stadium that would serve a temporary life as an Olympic stadium.

The Atlanta Braves, the City of Atlanta and Fulton County would get a brand new stadium without having to pay for it. The solution actually was a point of pride for Atlanta because we did not waste many precious dollars on wasteful Olympic venues that had no afterlife.

Because our Olympics were a privately-backed venture with no public-funding guarantees, every effort was made to make the most of every dollar.

It seems almost surreal now that this Olympics gift to Atlanta is likely to be discarded as the Atlanta Braves have decided to move to Cobb County and Atlanta Mayor Kasim Reed has let it be known that Turner Field will be demolished when the Braves vacate the stadium — a move now set for the end of the 2016 season. 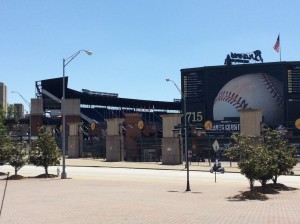 Turner Field as it is today (Photo by Maria Saporta)

So what are we left with?

That’s where Atlanta’s mixed emotions towards the Olympics begin to surface. Because it was so much of a private venture, there was a lack of public buy-in on so many of the key decisions related to the Games and how they impacted the city.

I remember early on when Atlanta was competing for the Centennial Games against several cities around the world, including Athens, Greece and Toronto, Canada.

Civic leader Joe Martin questioned whether the city would be better served to have the Olympic Village located downtown next to Georgia State University and Underground Atlanta rather than the Georgia Tech campus. Atlanta’s plan called for the Olympic Village to become GSU dorms once the Olympics were gone. 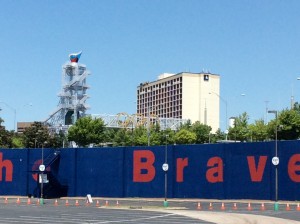 Martin, and others who wanted more public involvement of Atlanta’s Olympic plans, were told that one of our main selling points were how united we were as a city compared to the vocal opposition underway in Toronto.

“Let’s win the bid first, and then we can talk about the plans,” they were told.

Well Atlanta won the bid, and then those very people were told that those decisions — such as moving the Olympic Village downtown — could not be changed because they were now officially a part of our agreement with the International Olympic Committee.

The lack of community consensus also was apparent in selecting the Centennial logo (the beloved five As logo used in the bid was replaced with a more corporate look); the cauldron to hold the Olympic flame resembled a McDonalds container for French fries; and perhaps most embarrassingly of all, our mascot – “What is it” or “Izzy” – lived down to its name.

If we wanted to show class and charm, we failed. During the

Games, we were not well served by an Olympics organization that placed the international press last on the list of people who needed to be catered to. So it was no surprise that Atlanta received bad press in the early days of the Games.

The tragic bombing in Centennial Olympic Park cast a sadness over the Games. But when the park reopened several days later, it was one of the most uplifting moments of a city and an international community coming together for the forces of good winning over the forces of evil.

Although there were public funds spent to beautify the city and to provide security, the actual putting on of the Games was privately-financed – and it was a break-even $1.7 billion adventure. By comparison, the Winter Olympic Games in Sochi cost $50 billion, the most expensive ever.

So as we approach the 20th anniversary of our Olympics, let’s appreciate all the good qualities the Games brought to Atlanta, and let’s remember the lessons we learned of how we could have done better when we were on the world’s center stage.

Izzy – What more can I say