Earlier this year, Chick-fil-A CEO Dan Cathy made a plea to local leaders to help revitalize the blighted communities on the west side of downtown as a way to bridge the divide between the haves and the have-nots.

Now Cathy is putting money where his mouth is. Chick-fil-A Inc. will be locating one of its stores at the corner of Martin Luther King Jr. Drive and Joseph E. Lowery Boulevard next to the existing Walmart. As the first Chick-fil-A in that part of town, the store is expected to create at least 50 to 60 jobs in that community.

Not only that. At the Council for Quality Growth’s Four Pillar Award dinner on Oct. 1, Cathy also was to tell to attendees that the Chick-fil-A Foundation would be donating a total of $300,000 to the Westside Future Fund, an entity that has been established to serve as a focal point for corporate and philanthropic donors wanting to invest in the Vine City, English Avenue and surrounding communities. 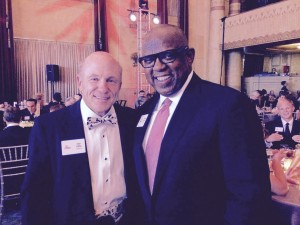 Chick-fil-A’s Dan Cathy with developer Jerome Russell before they announce that there will be a new Chick-fil-A store on Russell-owned property on Martin Luther King Jr. Drive (Photo by Maria Saporta)

“Individuals and businesses are going to have to be willing to prime the pump and get the fly wheels to start spinning again,” Cathy said in an interview a few days before the dinner. “We are going to try to stop this socio-economic divide that’s seen in so many urban markets. We are going to take a stand with others including the Arthur M. Blank Family Foundation.”

The spotlight on the west side has intensified with the building of the new Mercedes-Benz Stadium adjacent to the existing Georgia Dome. Early on, Atlanta Falcons owner Arthur Blank said the investment in the stadium needed to be done in concert with the revitalization of the surrounding neighborhoods.

That led to a meeting between Cathy and Blank on March 12 as the two billionaires danced around how they viewed the challenges and opportunities on the west side.

At one point, Blank asked Cathy why Chick-fil-A didn’t have a store in the community.

“It certainly wasn’t the first time that thought came to mind,” Cathy said of Blank’s observation.

In fact, Rodney Bullard, executive director of the Chick-fil-A Foundation, said the company had been considering the area long before that meeting.

“We wanted to study it,” Bullard said, adding that the company connected with Jerome Russell, owner of the property. “We didn’t want to put a store in the community out of charity. We wanted to do it because we believe in the potential of this neighborhood.”

As a company, Chick-fil-A has multiple expansion opportunities, and Cathy said he has to wrestle with the chain’s financial resources when deciding new locations.

“We had to say no to a restaurant in Seattle,” Cathy said. “We are going take that funding and invest it in an area that doesn’t have the demographics. But whenever you have big risk, you have the potential for big upside rewards. We think this could be the catalyst to leverage new development in the area. We are going to invest in the flywheel.”

The restaurant is expected to open by early to mid-2017. Bullard said the company expects to select a franchisee early next year.