Atlanta business leaders enthusiastically welcomed the news that Hala Moddelmog will be the next president of the Metro Atlanta Chamber Thursday morning.

Moddelmog, 57, a Georgia native who has been the top executive at Church’s Chicken, Arby’s and the Susan G. Komen for the Cure, was the unanimous choice of the Chamber’s search committee, its executive committee and its board, according to Paul Bowers, the 2013 chair of the Chamber who is also president and CEO of Georgia Power.

Moddelmog will be the first woman to serve as president of the influential business organization, which was founded in  1859, and now has more than 4,000 company members in the greater metro Atlanta area. Moddelmog will succeed Sam Williams, who has served as president for 17 years. 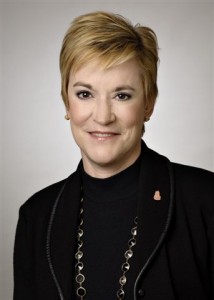 John Somerhalder, CEO of AGL Resources, said Moddelmog has a strong background in having run both privately-held and public companies as well as a major nonprofit.

“She has a nice balance of skills,” Somerhalder said. “She is a well-qualified individual.”

Richard Anderson, CEO of Delta Air Lines who will chair the Metro Atlanta Chamber in 2014, said Moddelmog was “A+.”

“When  you look at her experience, she was very successful in running two big organizations and a nonprofit,” said Anderson, who served on the search committee. “The awesome thing is that we got a diverse candidate, and we got the most qualified candidate. It was a really good outcome.”

Geri Thomas, Georgia president for Bank of America, emerged from the Chamber board meeting holding her big thumb up.

The Chamber also put in place its business leadership for the next three years, a move that it has not done in a long time.

After Anderson, Larry Gellerstedt III, CEO of Cousins Properties, will chair the Chamber in 2015; and Jenner Wood III, SunTrust Banks president for the Atlanta and Georgia division, will chair the organization in 2016.

After meetings of the Chamber’s executive committee and the board, which Moddelmog did not attend, a staff meeting was convened so that the 80 employees of the organization could meet their new leader, who will begin her new job on Jan. 6.

“I’m just energized,” Moddelmog said after meeting with the staff. “They seemed excited and warm. They seemed to all be really good people, just the kind of team I would have expected Sam Williams to have put together — people cultivated to the mission.”

Moddelmog said that she is delighted with the strong foundation that exists at the Metro Atlanta Chamber.

“It’s a pleasure to walk into a job where a strategic plan has been laid out,” Moddelmog said, adding that she will work hard to build a collaborative culture at the organization. “Culture eats strategy for lunch every day.”

Moddelmog, who has been involved in a couple of turnaround situations, also was pleased with the financial foundation of the Chamber. It has just completed its $30 million, five-year Forward Atlanta fundraising campaign — the biggest in the country for a Chamber during this period, according to Williams.

“The other thing that’s come to me in the last few weeks is how iconic the Chamber is,” Moddelmog said. “The hallmark going forward has to be about collaborating with others — with the governor, the Atlanta mayor and the other elected officials in the region. It just seems that this Chamber has played such a big role in so many important initiatives in Atlanta’s history, such as the Olympics. I know that every city wishes they had the kind of leadership on their (chamber) board like we do.”

Moddelmog also said it was “comforting” to know that her leadership was in place for the next three years. Gellerstedt will be the third generation in his family to chair the organization. He didn’t even realize that until he saw photos of former heads of the Chamber and saw his grandfather looking down at him.

Several business leaders were delighted that the search committee had selected a woman for the role as well as a non-traditional chamber leader to head one of the most power business organizations in the state.

“I’m proud the Chamber has made the historic choice of a woman — the first in 154 years,” said A.J. Robinson, president of Central Atlanta Progress.

Virginia Hepner, president and CEO of the Woodruff Arts Center who was the first woman to run her organization, agreed.

“She’s a fantastic choice,” Hepner said. “It will be the continuation of great leadership, and she’ll be a great partner (for the Woodruff Arts Center).”

Anderson said that Donna Hyland, CEO of Childrens Healthcare of Atlanta, has agreed to chair the transition effort.

“We want to surround Hala with everything that we can to help her be successful,” Hyland said. “I will help introduce her to members of the business community and university presidents.”

Williams also said he would be available. “Anything she needs,” Williams said.

“Having worked with Hala during her tenure at Arby’s, I think she is a fantastic choice to head the Metro Atlanta Chamber,” said William Pate, president and CEO of the Atlanta Convention & Visitors Bureau. “I look forward to working with her for the betterment of this great city.”