So what is it going to be Atlanta — are we building a central city for cars or for people?

The looming test for our town is the way we develop around the new Atlanta Falcons stadium. Several proposals have raised their ugly heads to suggest that we are still tied to the almighty car rather than the vision of a thriving walkable city.

But those proposals are out of sync with everything we’ve been led to believe about what can and should happen around the new stadium.

The Atlanta Falcons, the Georgia World Congress Center Authority and the City of Atlanta fought hard to locate the new stadium on the site south of the Georgia Dome largely because it would sit between two MARTA stations. Many people attending events would be able to ride transit rather than drive to the stadium — reducing the demand for acres and acres of parking.

More importantly, the hope has been that the stadium would be a catalyst for new economic development in the surrounding communities of Castleberry Hill, Vine City, English Avenue and the southern end of downtown.

The best way to spark new economic development is to create walkable urban places, according to Chris Leinberger, an urban real estate expert who has been studying Atlanta for decades. That’s what he said just last Friday, Nov. 1 at the Atlanta Regional Commission’s annual “State of the Region” breakfast.

“Sixty percent of development in the last four years went to walkable urban places (in metro Atlanta) on less than 1 percent of your land mass,” Leinberger said. “That was amazing.”

In the future, Leinberger predicted that 80 percent to 90 percent of all of metro Atlanta’s development will take place on less than 10 percent of its land — primarily in walkable urban places.

When residents of Castleberry Hill found out about the ordinance — imposing on their vision for the area, they reacted in force. And the mayor’s office quickly withdrew the ordinance, saying it was dead. But is it really dead?

At the same time, a zoning application has been filed on behalf of H.J.Russell by Tray Dye to amend the zoning of 12 properties in Castleberry Hill area near the new stadium to permit “park for hire” on those lots.

The zoning application repeatedly says about the properties: “the proposed use is compatible with the comprehensive development plans and timing of development… Given the property’s proximity to the Georgia Dome and taking into account the city’s and the Atlanta Falcons’ future development plans for the area, a park for hire use on the property would serve a public need now and in the future.”

Really? Do we envision that the whole area around the new stadium to become “park for hire” lots to now and in the future? Is that really the best way to generate economic development in the Castleberry Hill, Vine City and English Avenue communities?

That zoning application already has made it through the City Council’s Zoning Committee, and it is supposed to go before the Zoning Review Board on either Dec. 5 or Dec. 12.

“Given the confusion surrounding the parking overlay, it was the right thing for the Mayor’s office to pull the parking overlay ordinance,” said Heather Alhadeff, a planner and a resident of Castleberry Hill. “However, the rezoning application is still active. Ideally, the Mayor’s office, H.J. Russell, and diplomatic residents from Castleberry could meet to determine the best course of action.”

But Alhadeff still has trouble figuring out why Atlanta hasn’t followed the model of other successful cities.

“As a planner, it’s hard to understand why we in Atlanta still favor parking lots over beautiful urban places,” she said.

That’s not all. As currently designed, the new site plan for the proposed Atlanta Falcons stadium will do away with either Mitchell Street or Martin Luther King Jr. Drive for at least several blocks. 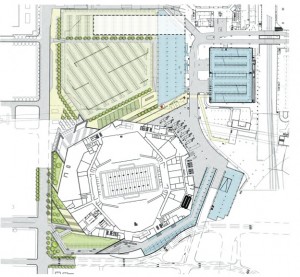 New site plan for Atlanta Falcons stadium. Martin Luther King Jr. Drive would curve along the southern edge of the stadium and merge into Mitchell Street. Existing MLK would dead-end on Northside Drive.

But there are several issues that could be problematic with that site plan. Mitchell Street west of Northside Drive is a much narrower corridor than Martin Luther King Jr. Drive, and it would be difficult to widen Mitchell without disrupting another important black church — the Central United Methodist Church at 503 Mitchell St.

That design would also have the existing MLK dead-end at Northside Drive at the stadium.

In looking at the site plan, however, it appears that there is room for the MLK-Mitchell Street to swing back around and meet the existing MLK at Northside Drive.

But that would mean that the new stadium could lose some VIP parking that it has placed in the southwest corner of that block. Again, is the design of the area going to be compromised to make room for cars?

Asked about the realignment of MLK specifically, Reed said he still committed to his vision of making it one of the most elegant streets in Atlanta.

“My goal is to significantly improve Martin Luther King Drive as part of this development,” Reed said. “My vision is a European boulevard vision.”

Another issue on the horizon is whether there will be a bridge over Northside Drive to connect the Vine City MARTA station with the new Falcons stadium.

Georgia Tech professor Mike Dobbins, who used to be Atlanta’s planning commissioner, is against a bridge, believing that Northside Drive needs to become pedestrian-oriented corridor that bridges the stadium with the community. His students have been developing alternatives for the area.

Bill Johnson, the senior principal for 360 Architecture — the Kansas City firm that is leading the design team for the new stadium, said a MARTA skybridge currently is not in the cards.

“Until there is a funding mechanism identified to go up and over, we haven’t really spent a lot of time thinking about it,” Johnson said. “We are proceeding as if Northside Drive would be the primary corridor for pedestrians and cars.”

As we move forward, let’s remember that quality urban design will help us become a more prosperous city. And we will get there, not by paving more parking lots, but by creating inviting places for people.

Previous Article
The big news this season is in the bones
Next Article
Under I-85, DOT linking Atlantans to nature and BeltLine