After Joyce Duvall’s friend was diagnosed with cancer, he witnessed firsthand the need for housing the families who traveled to help care for their loved ones.

The organization began in Boston and expanded to Atlanta this year.

Christopher’s Haven has four units in 131 Ponce Apartments, just across the street from the Emory Proton Treatment Center, one of the top centers in the country for reducing the risk of radiation in children. The Center provides high-quality treatment to around 17,000 patients annually and is one of the top-ranked cancer programs in America, according to U.S. News & World Report.

According to Christopher’s Haven, about half of the Center’s pediatric patients traveled from outside the Atlanta area. In these situations, families are often left footing a hefty hotel bill or struggle to commute with a very sick child.

Treatment generally takes six to eight weeks, and the Atlanta average hotel costs $112 per night this month, according to an analysis by Cheaphotels.org, meaning the charges can add up.

Since the apartments became available in March, 13 families have come to stay in the Midtown apartments. The building offers a pool, courtyards and games, which the children meet with a joy that Duvall likens to Christmas morning. 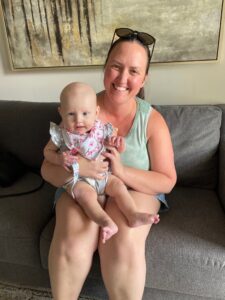 “When I see how moved they are that they can have a home while they’re going through this, not just a hotel, it just keeps me going,” Duvall, executive director of Christopher’s Haven, said. “We’ve had 500 families now that we’ve taken care of [and] they are the strongest people I’ve ever met, and it’s the most heartbreaking thing that I’ve ever witnessed.”

Staying in the apartments costs $30 a night, but only one out of the 13 families visiting Atlanta has paid out of pocket. The nonprofit works with foundations that will cover the costs, and if a family is unable to pay, they will not be turned away.

One mother described, in a video, receiving her daughter’s diagnosis and needing to travel 150 miles to get treated at Emory’s Proton Center.

“One of the biggest things I was telling my husband was like, “I don’t know where we’re going to stay or what we’re going to do. We’re going to have to drive the 2 hours and 30 minutes,’” she said. “Being here with Christopher’s Haven has made it so much easier. It’s a blessing, nothing short of a blessing, honestly.”

Duvall also hopes to secure ten more apartments, with two available to use as a meeting and event space by the end of the year. The Atlanta apartments are provided in partnership with Haverty’s and the Chick-Fil-A Foundation. 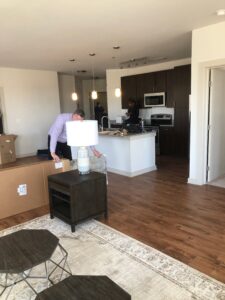 Haverty’s provides apartment furnishings for the nonprofit and sets it up free-of-charge. (Photo courtesy of Christopher’s Haven)

Haverty’s offered full furnishings for the apartments and will continue to donate their services for the nonprofit’s future expansion in Atlanta, according to Senior Vice President Rawson Haverty.

Haverty learned about the nonprofit and its mission through his work on the Chick-Fil-A Foundation’s board, and he immediately wanted to get involved.

“We’re so grateful for Christopher’s Haven [because] they’ve identified this really incredibly important need, that if they don’t have it, it makes it so much harder for these families to go through this treatment,” Haverty said. “It’s very meaningful to the families, and you can see that by just visiting with them… And yet, the extraordinary courage of these kids and what they’re going to go through is the reward because you’re providing them a safe place to go through something that’s almost unimaginable.”

Rodney Bullard, vice president of corporate responsibility at Chick-fil-A, Inc., added, “The expansion of their efforts in my hometown is deeply meaningful to me as I can witness the transformative impact they have on those in our community who are navigating the challenges of cancer.”

The Atlanta community has been “so kind, giving and caring,” Duvall said, and the nonprofit needs continued support to expand its services.

If you or someone you know has been impacted by cancer, consider donating to Christopher’s Haven to support their mission to provide an affordable place for childhood patients and their families to stay. If you need housing for yourself and your child receiving treatment, visit their website to apply.

Protect Yourself Against Infection: New Tool To Enhance Patient-Provider Conversations During Cancer Treatment