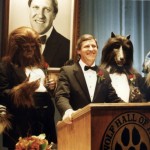 In the heyday of Wolf Camera, Chuck Wolf was a familiar face to anyone in Atlanta who took pictures.

For years, Chuck Wolf’s message focused on anyone with a camera: “Trust us with your memories.” Because we couldn’t see our pictures until they were developed, his Wolf Camera stores were all over the place. So was his face on his chain’s widespread advertising.

Now that so many of us have phones with cameras—and he survived bankruptcy—Wolf has reinvented himself. Through Chuck Wolf’s Photo Bar, the Ted Turner of amateur photography is now set up as an expert valet for handling precious .jpegs and archival pictures.

“With our phones, we’re building unbelievable records, but most of us leave that on our computers,” he said. “How many people do you really show it to who are really intimate to you?”

Wolf’s transformation points out how phones and social media make it easy to document our lives, but in the fast pace of digital life, how many of us take a longer view of what we want most to leave behind? 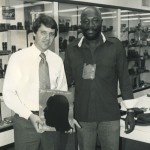 Wolf’s knack has always been to understand that photos aren’t about people and places and moments; they are about our identities and values. The Photo Bar serves those customers, some of whom want to curate and manipulate the selves they show to the world.

Downsized to one store in Sandy Springs—strategically located next to Johnny’s Hideaway, a dance club for longtime Atlantans—Wolf is a lifelong observer of  how we trace their lives through images.

Now 72, his long career in photography began at age 18 in his uncle’s camera shop in Washington, D.C. Wolf’s father had died when Wolf was 14, and photography offered a new way to look at the world. “I don’t look back,” he said. “I look forward.” 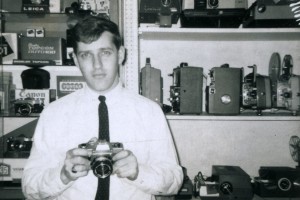 Wolf back in the day.

Nothing captured truer color than a Kodachrome slide, he claims, but point and shoot cameras eventually made photography so common that drug stores turned into photo developers. Wolf Camera more than doubled (to 700 stores) with the addition of Fox Photo, but digital cameras, home printers and online camera sales made them obsolete.

The Photo Bar was born from watching the digital age leave us with a flood of content to sort. For older people with few tech skills, this was especially problematic.

They want to hold their best photos in their hands, not just on a screen in their palms. They want a live person to metaphorically hold their hands through the process of dealing with memories. They don’t trust online providers to scan and reduce their boxes of snapshots to thin computer disks. They want someone who knows that if a fire ever raged through their house, they’d run back in to get their old photos. Sometimes they prefer the photos to tell a certain story. 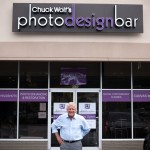 Chuck Wolf, 72, has downsized to a single storefront in Sandy Springs.

Wolf offers them concierge services, such as one-on-one sessions with a photo design specialist or help from an Adobe-fluent technician who will upload, import, scan, enhance, edit and prepare photos for production. They do house calls too. For distinctive wall photos and coffee table reading, Wolf produces gallery wrapped canvas prints, metallic prints, and customized books—even yearbooks that are designed to reflect each student’s interests and experience.

Images are no longer static; the Photo Bar can revise history when needed. “We manipulate photos,” he said. “If you’re divorced, we can put your new husband in an old photo.” 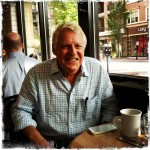 Chuck Wolf at our interview.

Significant passages are something he understands well too. His children are aged 43, 40, 15 and 17. He jokes that one motivation for his new business is having two ex-wives to support. The Photo Bar is thriving, with five full-time employees and 19 contractors.

They are young and computer savvy, with tools light years past the clunky photo developing machines that Wolf Camera used to rely on. Customers back then got a set to keep and one to give away, but now technology allows them to do a lot more: sort their memories to create whatever legacy they desire. “This is my last hurrah,” Wolf says of the Photo Bar, hoping that people will bring him their lifetime of images for the same reason.

Previous Article
General election campaign for U.S. Senate has begun with hyped memo
Next Article
The Most Important Room in Our Home for Better Health