Common ground with the homeless raised as Easter approaches 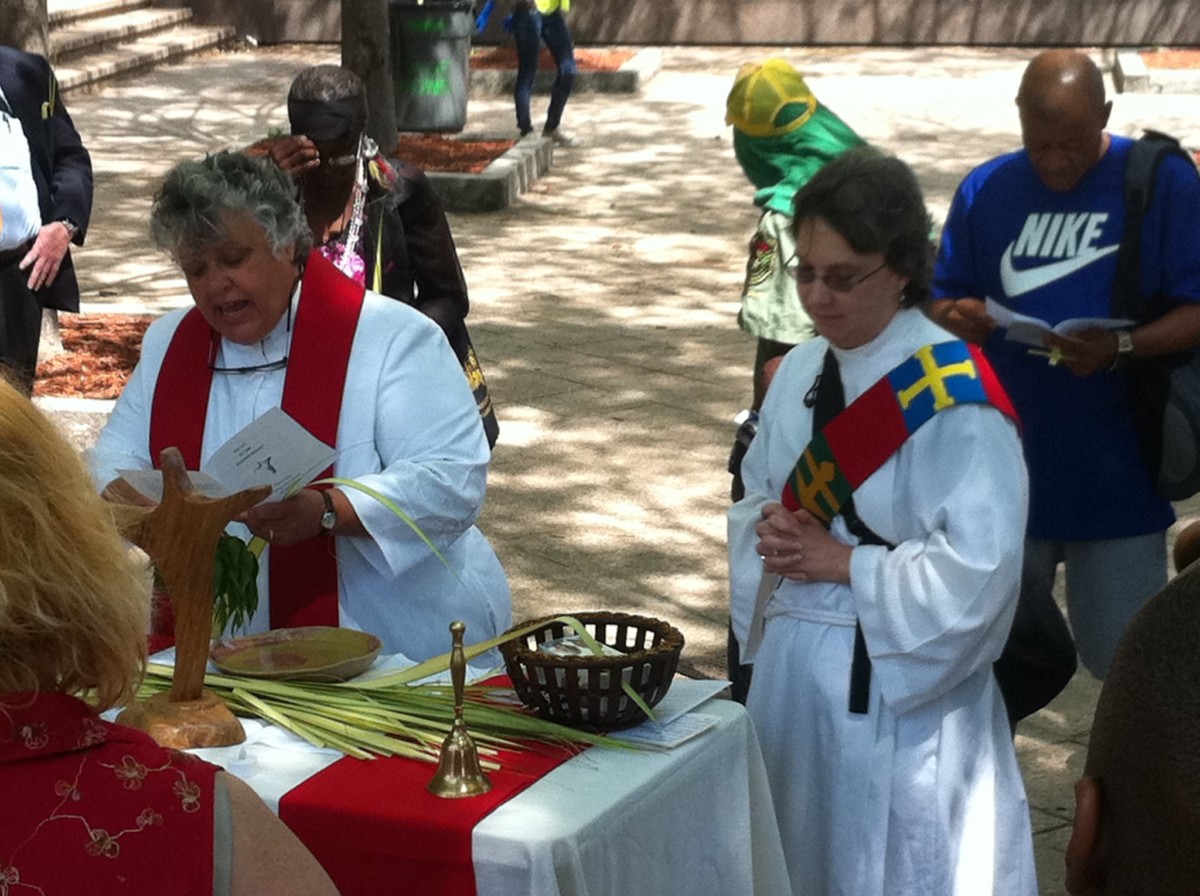 Downtown Atlanta can feel soulless, especially for the worst off in our city. Street people need help, and that’s hard to deal with. Give money? Pity? Ignore them? 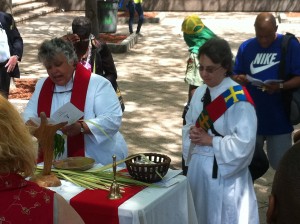 Episcopal priest Mary Wetzel and deacon Carole Maddux lead Palm Sunday service in Woodruff Park for homeless and others. The Church of the Common Ground holds services every Sunday 1 pm.

On a sunny, breezy afternoon, 50 people of various stations of life worshipped at the north end of Woodruff Park. Some wore suits, flashed lovely smiles and would leave in their nice cars. Others wore the sun-chiseled complexions of life in the elements, carried precious belongings on their backs and would leave by calloused foot.

An Episcopal vicar and deacon meet the homeless and whoever else on Sundays and Wednesdays, and the ceiling of their cathedral is the sky itself. They worship at a symbolic crossroads: the corner of Peachtree Street – the historic boulevard of white Atlanta – and Auburn Avenue – synonymous with African-American vibrancy. 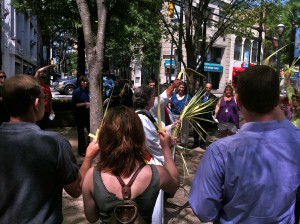 The Church of the Common Ground has no building; its worshippers circled Woodruff Park in downtown Atlanta in a Palm Sunday procession.

On Palm Sunday, their congregation swelled to 50 people, who sang “We Shall Overcome” and waved palm fronds in a procession around Woodruff Park.

Most of the park was cordoned off by chain link fence, for repairs after the Occupy Atlanta protest last fall.

“What are y’all protesting?” a young woman asked the worshippers, who replied that this was Palm Sunday; from them she accepted a small cross folded from a frond.

The service marks the triumphal but bittersweet entry of Christ into another major commercial city – Jerusalem, where only a week later his admirers would turn on him and help speed his public death.

The issues of injustice and imbalance of power were inescapable on this Sunday afternoon, too, as Occupiers’ dome tents clung to a narrow strip of the park across from a large bank. Their presence, and this congregation, persistently asks us: how can we close the gap between the haves and nots for the benefit of both?

Starting with a Christmas Eve communion in 2006, the Church of the Common Ground has responded. “We try to meet those who live on the margins right where they are by maintaining a sacramental presence on the street and creating a worshipful, safe space where anyone can gather and experience God’s healing love,” its website explains.

At the Palm Sunday service, vicar Mary Wetzel described a common ground between Christ and her audience. 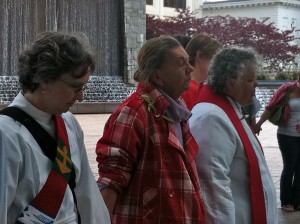 “Jesus knew people were going to disown him,” she said, going on to imagine a conversation with the donkey that provided his transportation through Jerusalem.

Regardless of religion, we all are equaled through humbling moments. This service — partially led by those who live on the streets — repeatedly chipped at the gap between the homeless worshippers and those who were much better off.

Introductions to the group –  by first name only – put all on the same basis. Staring into a street person’s face to see the face of Christ is a stark discovery of one’s own neediness – for status, approval and fleeting comforts. 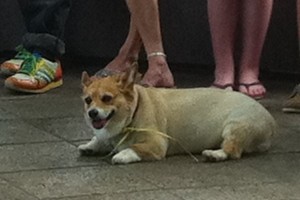 Bonnie, a Welsh corgi, takes part in the Church of the Common Ground service for Palm Sunday on April 1.

Afterwards, Wetzel said that more than food, her congregants need consistent relationships – caring people who will come regularly to listen and talk about life.

That request, for most of us, is much harder to meet than a panhandler’s ask for a bus fare. Coming in from the fringes of society requires greater human connection – a feeling of welcoming and belonging.

“We believe that re-establishing connection, trust, and faith is important spiritual work that empowers and transforms individuals and promotes healing and wholeness,” is their philosophy as described on their website.

ITo help bridge that gap, or learn more about the experience of Atlanta’s homeless, drop into the Maundy Thursday foot washing service at 3 pm on April 5 at Woodruff Park. Easter will be celebrated at 1 pm Sunday – the same time of weekly services. 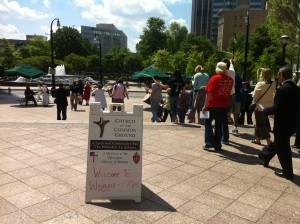 Church of the Common Ground served homeless and others through a Palm Sunday service April 1.

Another perennial opportunity to see local crossroads of social justice, history and spirituality is on Good Friday (April 6) at 9 am at the State Capitol. All are welcome to join the 32nd annual “Urban Pilgrimage: Stations of the Cross,” an ecumenical tour of 14 downtown sites that highlight needs and suffering among Atlantans.

According to its website, the Catholic Archdiocese of Atlanta’s Social Justice Ministry “promotes transformation of individuals, parishes, and the larger community to answer the call to love of God and love of neighbor.”