Cicadas to pervade eastern U.S., but not Atlanta

All that buzz about locusts descending soon is just that. 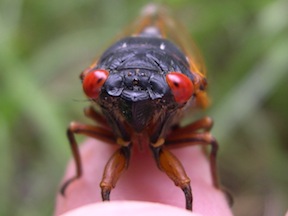 The Brood II cicada infestation is starting to emerge as billions of the creatures make their every-17-year appearance. What USA Today and others call “Swarmageddon” is reminiscent of the Biblical plague of locusts. The cicadas are generally an inch long, have orange wings, bulging red eyes and black bodies.

They make a lot of noise during their six-week heyday before depositing their crunchy brown carcasses all over people’s lawns. From Connecticut down the mid-Atlantic, they are emerging, tracked online by various groups including Cicada Mania.

But most cicadas are expected to stop short of the Georgia state line.

“We’re having a lot of cicada envy right now. A lot of people want to see them again, but here in Georgia, I’m afraid it’s not to going to happen,” said Nancy Hinkle, a professor of entomology at the University of Georgia. “At least not in the vast majority of the state.”

University of Georgia entomologist Nancy Hinkle and a cicada.

Rabun, Habersham, Union, White and Towns counties in northeast Georgia are considered the likeliest locales for a little locustpalooza. Some of the buzzing bugs may be along the Appalachian Trail. But Hinkle cautioned that this type of cicada was last reported 34 years ago. That gap makes their appearance this time somewhat iffy. (Cicadas are commonly referred to as locusts, though technically they are not. Locusts are a type of grasshopper.)

Cicadas can’t show up in places where they didn’t make an appearance 17 years ago. They only emerge where they laid down nymphs, and develop into full-grown insects by sucking fluid out of tree roots. The main reason Georgia will be cicadaless? Development.

“Remember, if we cut down trees, that population dies out and they will never be seen again,” said Hinkle. “The same thing happens, if we build a parking lot or lay down a road or build a subdivision. We’ve wiped out huge swaths of cicadas over the past hundred years by simply clearing farmland.”

The absence of cicadas is one measure of the transformation of our environment. File it along with celestial events, like meteor showers, that can’t be seen well because of so many lights in the city. Our city’s growth has further separated us from what Hinkle and others call an “amazing natural phenomenon.”

“Some societies and native American tribes eat cicadas,” she noted. “They make wonderful dog toys. They go into dogs’ mouths and keep vibrating. They make this weird buzzing, humming sound. Some people say it sounds like the mother ship landing.” 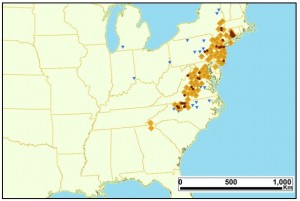 Cicadas are expected to show up along the East Coast soon. Magicicada.org tracks where the insects are most likely to swarm.

The invasion is so freaky that two years ago, when the 13-year Great Southern Brood (a.k.a. Brood XIX) swarmed through 14 southern states including Georgia, residents in some rural areas called in UFO reports to local authorities. Thirteen years earlier, The Rome News Tribune reported that some area residents had also mistaken the sound of cicadas for an alien spacecraft.

Another measure of how unlikely we are to see cicadas is the absence of budding scientists awaiting their arrival.

“Let me put it to you this way: I have lived long enough to have a track record on this,” said Hinkle, who took a couple of weeks off work off to conduct a state survey of the 2011 cicadas. “There are no graduate students working on these cicadas because you have to wait 17 years to do research. There’s really not a good way to compute odds.” 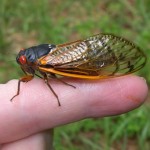 Cicadas visited Atlanta in 2011, but this year none are expected this far south. (Photo supplied by Nancy Hinkle/UGA)

This year, the only Brood II cicadas that showed up in Rockdale County were a couple of preserved, dead ones on display at the county’s eighth annual “Insectival” celebration this past Saturday.

“I have a lot of people talking about it,” said Macie. “They keep asking when are they coming.”

Macie, who is originally from Pittsburgh, said she’s been living in Georgia for 25 years and is aware of all the development that’s been taking place here. But she thought there would still be colonies of cicadas left in her suburban county east of the city. Two years ago, she was really looking forward to hearing the Great Southern Brood singing in the trees, but that didn’t happen either.

“I was really expecting to see them and hear them,” said Macie, who became an entomologist because of her fascination with these other insects. “And when I didn’t I was really bummed.”

Georgia will see the annual dog day cicadas, but those aren’t nearly as impressive as the “periodical” cicadas which gestate underground for nearly a generation and swarm into the trees by the billions. According to Cicada Mania, there are 15 broods of periodical cicadas that appear in 13-year or 17-year cycles. The next brood to appear in Georgia is Brood VI, which is scheduled to rise from the ground in 2017.