By Guest Columnist MIKE DOBBINS: a Georgia Tech professor of architecture and planning who also served as the city of Atlanta’s commissioner of planning, development and neighborhood conservation from 1996 to 2002. Dobbins also is author of a new book: ‘Urban Design and People.

Parking is about a lot more than storing cars and generating revenue.

Parking, and in the current situation on-street parking, is about access and walkability, retail, restaurant and residential viability, and altogether the character – the attractiveness and functionality – of the more intense parts of town.

Various studies have confirmed the common sense that cars parked at on-street parking spaces provide a positive frame for a good quality pedestrian environment. They enable not just real and perceived access for car passengers but they also protect pedestrians, streetlights, trees, and sitting places from the rush of curbside traffic. 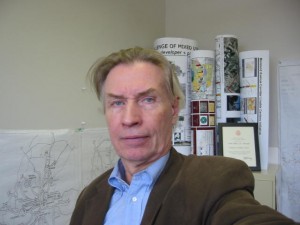 For retailers, restaurateurs, and other businesses, they provide the promise and often the reality of more convenient access from which their businesses benefit. For urban dwellers, they provide parking for residents and their visitors, conveniences that complement other amenities for those choosing to live in urban scale communities.

For those businesses, residents, and visitors who choose to imbibe in urban life, then, supporting that choice becomes an important policy matter for local government. Leading up to the Olympics and for the most part ever since Atlanta has retooled its policy mix to support and encourage those who want to make the urban choice, whether for locating the workplace or the home or for shopping, entertainment, or cultural and sporting events.

Zoning overhauls, development incentives, streetscape and wayfinding improvements, locating venues for broad audiences, and other initiatives have provided the base from which the city has stimulated its ongoing turnaround. It has attracted to its diversity of places the people, employers, and attractions that have lifted it out of its suburban-driven, white flight decades of decline.

To now make parking policy choices that reverse this progress, very likely for lack of understanding the larger implications, would be a significant setback. It would fly in the face of the policies that have made the city an ever-improving environment to attract the growing markets of seniors, empty-nesters, jaded suburbanites, and people moving from other places who are finding positive choices in the city.

Even so, the government — our representatives in our collective ownership of the city’s streets — is responsible for their management and collecting the revenue generated by the use of the streets for parking.
As many businesses have correctly pointed out, however, the current parking arrangement directly threatens their prospect for generating revenue, much of it taxable at one level or another.

The city has responded, wisely, by declaring a moratorium on the privatization agreement that they entered into last year, with a view toward reviewing and hopefully reworking that agreement.

At least two tracks should be taken in this review: 1) how to establish a parking policy that will reinforce, instead of threaten, its urban-friendly policies that have been successful from the mid-nineties; 2) generate a cost-benefit analysis of the current parking contract that takes into account not just the narrowly conceived parking revenue/enforcement arrangement but also estimates the certain declines in overall revenues that maintaining the current contract would cause.

It would appear that what happened is that the deal struck took into account neither of these lines of analysis. Instead, the machines and their two hour limit and 24/7 enforcement seem the simplest and most remunerative for the private partner. One size fits all, even though the streets and their use for parking are widely variable.

The city must see the people, the owners of its streets, as customers with varying needs and in the context of attracting ever more customers instead of closing the gate to them. Such a comprehensive analysis might lead to a whole different approach to the more complex problem.

For example, areas with substantial retail, restaurants, in-and-out businesses, and residential densities could use more on-street parking not less. This could be accomplished by opening up and metering “no parking” streets for parking during the off-peak hours that presently bar parking – even Peachtree Street.

Except during the peaks, there are few if any streets in the higher intensity parts of the city that have traffic congestion problems. Yet because of their very densities and diversity of activities, such streets could generate considerable parking revenue. To compensate for the heightened enforcement required during the peaks, the penalties could be more severe, using high fines and towing to cover the costs.

Regardless of the outcome of that idea, the 24/7 enforcement is a killer — the City should get rid of it, unequivocally. No one will come to eat, entertain, take in events, or even choose to live in an environment so draconian. It is killing the very street life that makes a city a city.

Surely the fancy new toll machines are sophisticated enough to program much more time-sensitive collection and recording apparatus to turn the whole of the parking enterprise into one that is sensible and welcoming, while still generating greater parking revenues than in the past.

The enforcement period should vary, like for peak hours, and its baseline should allow parking without fees from something like between 7 p.m. and 7 a.m. For a city that wants to attract people, the goal should be to balance people’s access needs with legitimate and appropriate penalties for abuse of the access system.

Parking policy is vital to Atlanta’s future as a place of urban excellence.