An international leader in socially-responsible capitalism — Muhammad Yunus — would love to forge a closer partnership with Atlanta.

Yunus, the 2006 Nobel Peace Prize winner who has become a global leader in microcredit lending, was in Atlanta Friday to receive the Phoenix Award from Atlanta Mayor Kasim Reed — the highest honor given by the city to individuals for their outstanding contributions.

“This is really a special occasion for me and Atlanta,” Reed said during a briefing in his office. “I’m going to be watching how other cities are following your lead. We are looking for opportunities to provide microcredit (in Atlanta).”

Yunus gained his notoriety by establishing the Grameen Bank (which means “village bank” in Bengali) more than three decades ago. People living in poor villages, who had not had access to affordable credit, were able to get small loans from Yunus’ bank, and once they became borrowers, they also became owners of the bank.

Today, Grameen Bank has operations all over the world.

When Yunus was in Atlanta in August, 2010, he privately told people he would love to open a branch of Grameen Bank in Atlanta. 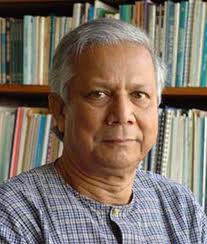 “We are ready anytime,” he said. “Somebody has to come forward with the money. We would need $6 million over four years.”

Reed went on to say: “We definitely have an interest. We are just trying to do it well. We also are going to be watching what other cities are doing and learning from their microcredit experiences. Once you create a facility and have the capability of making loans, you want to have good outcomes. That’s going to require a great deal of learning on our part.”

Yunus said he has some close ties to Atlanta that date back to his admiration of the late Martin Luther King Jr. when he was a student in Nashville. Yunus also mentioned several other friends that he has in Atlanta, including Ted Turner and former President Jimmy Carter.

“I’m very happy I could come and receive this special honor; it’s special because the City of Atlanta has been with me for a long, long time,” Yunus said.

The Nobel Peace Prize winner also said he is in discussions with other cities to come up with opportunities to encourage social entrepreneurship.

“We can address many of the city’s problems in a different way, in a social business way,” Yunus said.

Reed also shared his desire to invite all the living Nobel Peace Prize winners to come to Atlanta for a conference in 2014. Yunus and his team said the would support that event “100 percent.”

Also, Yunus said he holds a “global business summit every year,” and this year it will be in Vienna. Although he didn’t say it directly, Yunus seemed to be open to holding a social business summit in Atlanta at some point in the future.