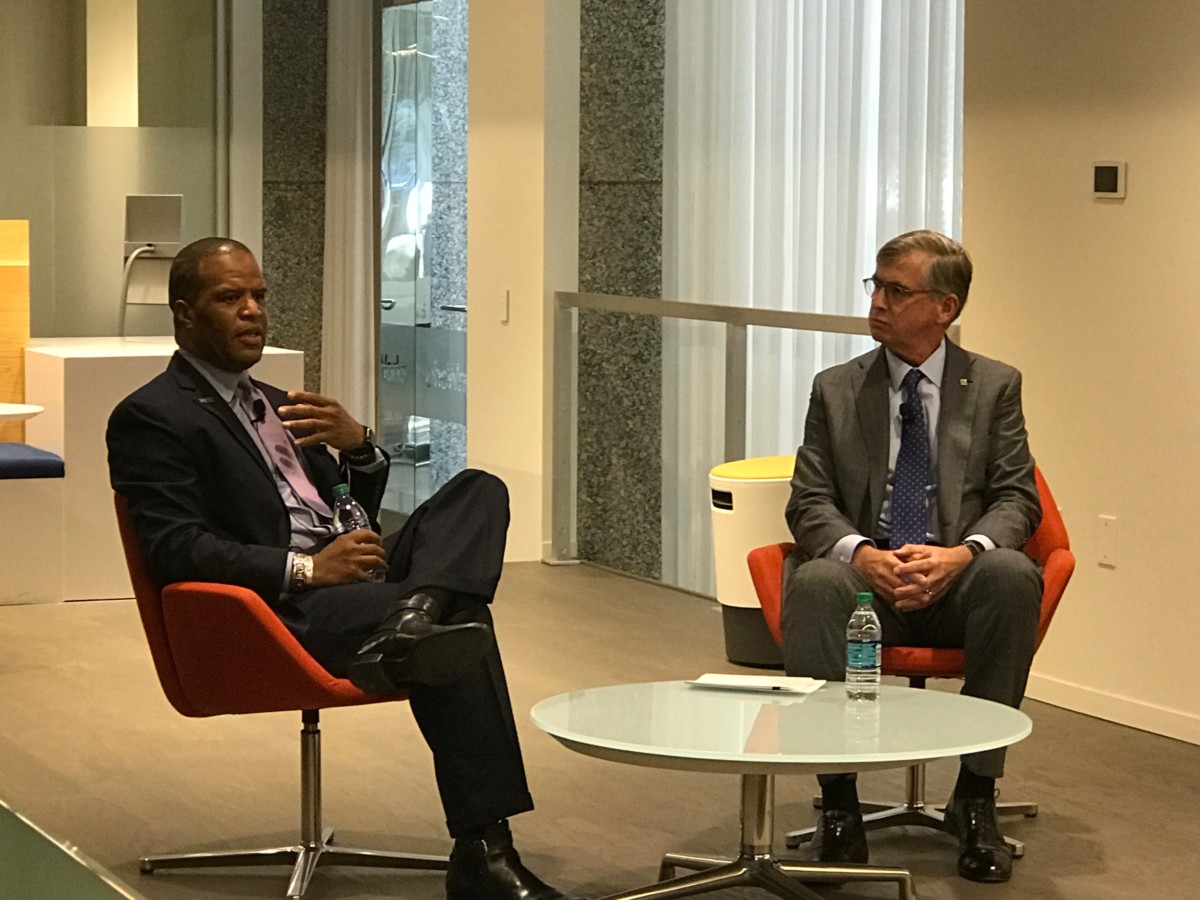 By Maria Saporta
As published in the Atlanta Business Chronicle on October 20, 2017

“Your credit score matters,” Bryant said in a conversation with Bill Rogers, the CEO of SunTrust Bank. “Could it be that our problems are not racial, that they’re economic?” 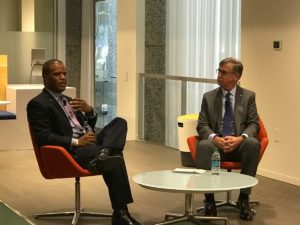 The conversation between Bryant and Rogers took place Oct. 17 at SunTrust’s “onUp on Tour,” when the bank created a pop-up entertainment experience on Peachtree Center Avenue to inspire visitors to learn about finances. Their conversation centered on Bryant’s new book, “The Memo: Five Rules for you Economic Liberation”.

Bryant said credit scores determine whether people can get loans to start a business or a mortgage to buy a home. Banks cannot do either if someone’s credit score is at 620.

“My job is to put the bank from being in the ‘no’ business to the ‘yes’ business,” Bryant said. Operation HOPEhas put Hope Inside centers inside banks all over the country. When someone gets turned down for a loan, Hope Inside officials can work with customers to improve their credit scores, receive earned income tax credits and help improve their financial picture.

The concept is to help lift someone from hopelessness to hope, Rogers said. By helping one customer, there’s a ripple effect as neighbors benefit from someone’s stronger economic situation.

“You do that in every block in America and you can change this whole country,” Bryant said.

When the Georgia Literacy Commission releases its recommendations on the morning of Oct. 26 at the Georgia Chamber of Commerce, it will be a beginning – not an end.

Wendall Dallas, co-chair of the commission and Atlanta Gas Light’s vice president of operations, said each of the recommendations will have an action plan with next steps. It also will identify which entity – be it a nonprofit, a government or business group – should take the lead in implementing those recommendations.

“We want to make recommendations that are doable,” Dallas said. “Let’s not reinvent the wheel. Let’s be smart in how we approach this so stuff is actually done.”

The Commission’s other co-chairs include Georgia First Lady Sandra Deal, retired executive Phil Jacobs and Georgia Public Broadcasting’s Teya Ryan. The Commission has brought together constituencies from across the state – public, private and nonprofit – to develop the recommendations and implement them. The alliance – Literacy for All – has been managing the Commission’s work.

“The beauty of it is that there were all these silo organizations doing great work but never had they been brought together to have the lift and the voice on this issue,” said Alicia Philipp, president and CEO of the Community Foundation for Greater Atlanta, which is providing office space for the initiative.

“Having the first lady involved is such a game changer because of her deep interest in this issue,” Philipp added. “More and more businesses, governments and nonprofits understand that low literacy is one of the major roots of inequity in this state.”

Previous Article
SART holds Atlanta mayoral run-off forum with Bottoms and Norwood
Next Article
Leaders, Beware the Pitfalls From the “Gift” of Feedback