Civil war photography provides clues to Atlanta, then and now

This week, ALLISON HUTTON, of Georgia Humanities, examines Civil War photography of Atlanta for clues about its past.

Last month in a column about the National Endowment for the Humanities (NEH), we mentioned filmmaker Ken Burns, whose documentary, The Civil War, was supported by the NEH and named one of its top 50 projects.

The documentary made iconic Burns’s style of zooming in on and panning still images in the absence of live footage (a technique, Burns says, he did not invent himself but rather learned from a mentor), utilizing evocative background music, and relying on actors to provide moving “first-person” testimony to complement third-person narration.

Without any one of these elements, Burns’s documentaries would fail to achieve their characteristic richness, yet there’s something to be learned or gained from each of these elements alone. 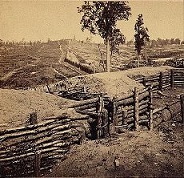 Instrumental music, particularly the now-familiar song “Ashokan Farewell” (astonishingly, not a nineteenth-century tune, as one might believe, nor one specifically written for the documentary’s soundtrack), has the ability to provoke a certain mood.

Though less vivid, and certainly less dramatic without the vocal talents of Julie Harris, Sam Waterson, and Morgan Freeman, the words of diarist Mary Chesnut, President Abraham Lincoln, and abolitionist Frederick Douglass do provide the names and places of which history is made.

Photography serves as a bridge, eliciting emotions and documenting reality; the noted photographer Mathew Brady was one of the first to envision the potential role of photography in the Civil War, stating “the camera is the eye of history.” 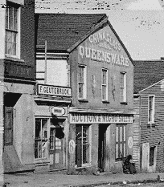 George N. Barnard was one of the many photographers, known and unknown, who captured the Civil War. Notably, he captured it here in Atlanta.

As the official Union Army photographer of the Military Division of the Mississippi, which was commanded by William Tecumseh Sherman, Barnard was present during the Union Army’s two-and-a-half-month-long occupation of the city, a period beginning in early September with the fall of Atlanta and ending in mid-November with the destruction of the city and Sherman’s march to the sea.

Those of us keen on Atlanta’s history, particularly its Civil War history, would be glad to see the city receive the full Ken Burns treatment, but we can learn plenty about the city — then and now — from the photos George Barnard took of it during the Union occupation and a few points of context: 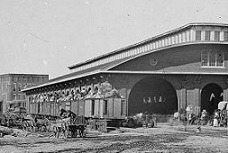 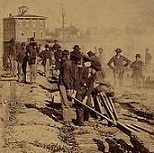 On November 15, 1864, Barnard left Atlanta with Sherman and the Union army. Burdened with heavy equipment and a quick pace, Barnard was unable to capture any images from the infamous march to the sea.

“View of Atlanta, Ga., October 1864, from the Female Academy,” by George N. Barnard (Library of Congress)

After Sherman received the surrender of Confederate general Joseph E. Johnston on April 26, 1865 (more than two weeks after Robert E. Lee’s surrender to Ulysses S. Grant at Appomattox courthouse), Barnard retraced his route through Georgia, capturing the devastation he had missed on the way to Savannah.

In 1866, Barnard published a book of his images,  Photographic Views of Sherman’s Campaign, helping to establish the camera, as Brady said, as the eye of history.