The National Endowment for the Humanities is at work in Georgia

Last Thursday the White House released a budget that proposed the elimination of the National Endowment for the Humanities (NEH). You may not be immediately familiar with its work, which grounds itself in disciplines that explore how people understand and express the human condition, such as history, literature, art, music, language, philosophy, and ethics, but you’ve felt its impact.

The NEH was created as an independent federal agency in 1965 by President Lyndon Johnson through the National Foundation for the Arts and Humanities Act, the most ambitious piece of cultural legislation in American history. Complementing similar agencies, such as the National Science Foundation and the National Aeronautics and Space Administration, the NEH visibly enhanced America’s leadership in the free world in the midst of the Cold War, and helped to cement America’s place in the world of learning and the life of the mind. Democracy, the act said, demands wisdom.

“The humanities belong to all the people of the United States,” declared Johnson upon the agency’s creation. Today the NEH serves every state and territory in the country through grants to museums, libraries, and scholars. Most Americans have heard of or seen the groundbreaking work of filmmaker Ken Burns, whose documentaries on the Civil War, baseball, and jazz (among other topics) have helped us develop an unprecedented understanding of and appreciation for our own history. In the 1970s, the arrival of the treasures of Egypt’s King Tutankhamun to our shores for a traveling exhibition helped us understand the world. The NEH supported both. 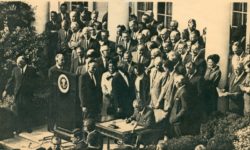 The NEH works on a smaller scale, too. No less important than the documentaries and treasures that have captivated a nation are the local projects supported by NEH funds. Here in Georgia, grants from the NEH have benefitted the University of Georgia, Albany State University, Georgia Institute of Technology, Wesleyan College, Spelman College, Emory University, and Mercer University, among other educational institutions. Thanks to the NEH, Morehouse College was able to expose more students to documents in the Martin Luther King Jr. Collection, and Georgia State University investigators are able to explore the impact of moral injury on members of the armed forces.

As a “Jamil’s Georgia” reader, whether you check in weekly or every now and then, you’ve also felt the impact of the NEH. “Jamil’s Georgia” is a creation of Georgia Humanities. One of 56 state and territorial affiliates of the NEH, also known as state humanities councils, and receiving nearly half of its funding as a grant from the NEH (which it matches, five dollars for every federal dollar), Georgia Humanities serves as NEH’s “boots on the ground,” so to speak, focusing on local communities and responding to their needs. Georgia Humanities has gathered, preserved, and shared Georgia’s distinctive stories through a range of cultural and educational programs and resources that touch each of Georgia’s 159 counties.

Georgia Humanities shares the stories that move us and make us, an undertaking aided immeasurably by the New Georgia Encyclopedia (NGE), created in partnership with the University of Georgia Press, the University System of Georgia/GALILEO, and the Office of the Governor. The NGE is the first state encyclopedia designed exclusively for online publication. When it went live in 2004, the NGE placed Georgia at the forefront of providing dynamic, authoritative learning resources for students and teachers.

The NGE’s online presence offers unparalleled access. The NGE’s quarter million monthly users can learn about Georgia 24 hours a day, seven days a week for free. No library or school can claim the same, which is why they rely on the NGE. Every public library system in the state uses the NGE, and students in every county use it, too. When students hit eighth grade, the year designated for Georgia Studies, teachers turn to the NGE, which has correlated its content to match the Georgia Performance Standards for Social Studies. Many use the NGE exclusively instead of costly textbooks.

When the world needs to know about Georgia, and it wants information it can trust, it turns to the NGE. Hailing from every corner of the state and even across the globe, NGE users have access over 2,200 professionally written, fact checked articles and over 10,000 images. This includes the state art collection and information on every county in Georgia. Unlike traditional, print-based encyclopedias, the NGE is ever-changing: it is updated every day, and snippets are made available to busy Georgians on Twitter and Facebook.

Unlike traditional print-based encyclopedias, the NGE is updated everyday, allowing it to keep pace with a changing Georgia.

You don’t need to be a student or have a particular question about Georgia to have felt the impact of or learned from the NGE. You’ve felt it here on the SaportaReport. In columns about the Georgia coast, Rosenwald Schools, Flannery O’Connor, and the old Beltline magnolia tree, “Jamil’s Georgia” has drawn inspiration from the material of the NGE to reflect on Georgia’s past and make connections to its present and future. None of that would be possible without Georgia Humanities or the NEH.

The promise of the NGE was recognized early in Georgia by Governor Zell Miller and Steve Wrigley, the current chancellor of the University System of Georgia, and Atlanta’s Robert W. Woodruff Foundation. When Georgia Humanities sought additional funding for the NGE, the NEH provided critical financial support, acknowledging the value of this uniquely Georgian project in itself and as an exemplar to the rest of the country. As the project progressed from vision to reality, these early investments were matched by a variety of local and regional foundations.

In 2015, upon the 50th anniversary of the NEH, the NGE was honored as one of its top 50 projects. “The New Georgia Encyclopedia is an invaluable resource for the preservation and observation of state history. As Georgia continues to grow and thrive, collecting our history and making it available to future generations becomes increasingly important,” said Governor Nathan Deal. “The encyclopedia was designed to be authoritative and accessible, and this recognition from the National Endowment for the Humanities cements the New Georgia Encyclopedia as a leader for the preservation of state history.”

Last week, a retired educator and long-time NGE user sent the encyclopedia the following message, which speaks to the average Georgia’s experience of the site:

“The changes of the New Georgia Encyclopedia are truly impressive. I began using this site about nine years ago as a Georgia Studies teacher, and now as a retired teacher (39 years in the classroom) I find that you have made more changes which are incredible! You have added a wealth of information over the years, and it is very user friendly. The resources that are provided enrich the site and broaden the scope of use by teachers. I hope that all teachers of Georgia Studies are referring to this site on a weekly basis.

“Thank you for the dedication to continually improving this site for all Georgians who have a love of learning.”

If democracy truly demands wisdom and vision of its citizens, then the NEH has become our national civic catechism. Help us continue to share the stories that make us who we are and move us toward awareness and understanding of the world around us.

To learn more about the NGE and Georgia Humanities’ other programs, such as library programs for families at risk of low literacy; book-publishing projects; Talking Service, a reading and discussion group for veterans transitioning back to civilian life; National History Day, a program for middle and high school students that promotes history and civics education; grants for public programs celebrating history, literature, and culture; traveling Smithsonian exhibitions, such as Hometown Teams: How Sports Shape America (currently in Fort Valley), that stimulate community partnerships and economic development, and more, visit www.georgiahumanities.org.

Previous Article
For a while it was king of the hill
Next Article
Housing costs: Best of times, worst of times as rent, mortgages outpace wages