A portrait of artist Jean-Michel Basquiat. (Image provided by The Bishop Gallery.)

The “Our Friend, Jean” exhibition was at the CAU Art Museum for one week.

Last week, a rare exhibit showcasing the early works of Jean-Michele Basquiat gave an intimate account of the artist to mostly Atlanta University Center students by people who knew him best.

New York-based art gallery, The Bishop Gallery, The Thurgood Marshall College Fund and Hennessy sponsored a six-stop tour to Historically Black Colleges and Universities (HBCU) displaying artwork on loan from the friends, lovers and former collaborators of the renowned artist.

Pieces from the “Our Friend, Jean” exhibit at the Clark Atlanta University Art Museum. (Image provided by CAU.)

The gallery’s purpose is to create space for dialogue and the exchange of ideas between people of different cultures and socioeconomic backgrounds as a way to learn about art.

Clark Atlanta University was the third stop of this gallery tour. It was previously displayed at Howard and Hampton Universities and will now go on to its remaining stops at Tennessee State University, Dillard University and Texas Southern University.

“We know that the center of Black excellence — the only place that we’re given scholarship and appreciation to Black artists in America — have historically been our HBCUs,” Dunn said.

Dunn thinks the artist would have approved of this tour as a way to bring his art to the people.

Born to a Haitian immigrant father and a Puerto Rican mother in Brooklyn, New York, Basquiat spent his adult life in eclectic Lower East Side Manhattan in the 1980s. He first partnered with Al Diaz to create the artistic duo SAMO from 1978 to 1980.

Because of his limited resources, Basquiat mostly used found objects in his work, but it wasn’t until meeting one of the art world’s most famous names that he found major fame. Basquiat was selling postcards of his pieces when he met Andy Warhol who became his patron, sending him to international stardom. This fame was short-lived, though. Basquiat died of a drug overdose in 1988 when he was 27 years old.

Today, his work is admired by international audiences and continues to inspire artists like Beyoncé and Jay-Z. As such, his pieces have enormous price tags. In 2017 an untitled piece created in 1982 sold for $110 million — the most expensive painting purchased at the time.

“He said, ‘I’m gonna be a famous artist one day,’ and I believed him,” said Alexis Alder, embryologist and former friend and lover of Basquiat. 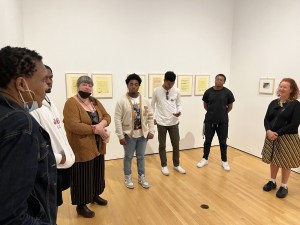 Alder told SaportaReport that she met Basquiat through their mutual friend, Felice Rosser, at a neighborhood spot called The Mud Club when he was going by the name SAMO. The three eventually moved into Rosser’s apartment after having a few incidents with a former roommate.

“There were a couple of incidents of Jean writing on the walls. In her apartment and the hallways. He had gotten in a fight with the super and it was time we moved out,” Alder said.

Rosser allowed Basquiat to stay in her studio apartment as a place for him to create his art and sleep on his loveseat.

Remembering what it was like to be a young artist, Rosser thinks that Basquiat would have enjoyed seeing other artists who were his age when he created these pieces.

She hopes that young people, especially art students, remain true to themselves when it comes to artistic expression. She hopes the exhibition showed that gaining inspiration from other artists and different cultures was what Basquiat used to express his Blackness.

“Jean was a person that went far beyond what was prescribed as the role of a young Black man. He explored everything,” Rosser said.

One important thing to note about Basquait, Rosser said, is how he made up his own style by sampling from others — from David Bowie to Run DMC, from Picasso to Haitian art, it was all incorporated.

An estimated 1,000 people experienced the “Our Friend, Jean” exhibit at CAU and Alder and Rosser are pleased with its outcome.

“It’s incredible to see the art students and the light in their eyes. [Basquiat] believed in himself,” Rosser said. “That’s why it’s important to bring [this exhibit] to the people, to the Black people.”

Dunn said there’s no shortage of genius in multicultural communities, but there is a significant shortage of access to opportunity.

“Basquiat made what was accessible work for him,” Dunn said. “And it became a way he could differentiate himself because of the access to his materials like painting on mattresses, doors or a refrigerator.”Click here to learn more about the exhibition and to see the pieces that were on display.