CAU President George French in front of Harkness Hall and next to the bust of W.E.B. DuBois, who wrote "The Souls of Black Folks" (1903) while living at Atlanta University's Gaines Hall. (Photo by Maria Saporta.)

George T. French Jr. was sitting in the audience on the great lawn of Morehouse College watching his son — George T. French III — graduate from the esteemed historically black college and university (HBCU).

In the background of the Morehouse graduation stage, French zoomed in on Clark Atlanta University’s famous Harkness Hall with its distinguished clock and bell tower.

“At the time, I was negotiating to be president of Clark Atlanta,” French said in a recent interview. “There were 5,000 people on the lawn, and 5,000 saw the beautiful Harkness Hall with its paint chipping off.” 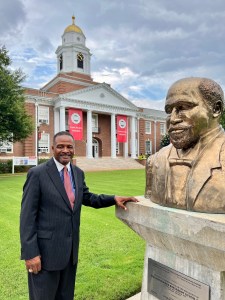 CAU President George French in front of Harkness Hall and next to the bust of W.E.B. DuBois, who wrote “The Souls of Black Folks” (1903) while living at Atlanta University’s Gaines Hall. (Photo by Maria Saporta.)

“The very first thing I did when I became president was to was to commission the total exterior renovation of the clock tower,” French said. “The bells weren’t ringing. We also redid the gold on the dome so it’s brilliant.”

“We have never had a comprehensive master development plan,” French said. “The master plan is underway. It’s about 65 percent complete. We are looking at current use and programming for the future. We will have faculty, staff, student and community involvement.”

Over the years, Clark Atlanta has been described as land rich, but cash poor.

“We are doing $1.5 million of stabilization on Gaines Hall,” French said. “We just recouped the insurance money from the city for the damage of Gaines Hall. We have already started the stabilization of Diamond Hill.”

French said New York-based Direct Invest Development was awarded the contract to develop Diamond Hill, which covers about 12 acres. Direct Invest, under the leadership of Carlton Brown — no relation to Clark Atlanta’s former president — said it was formed “to mine value in disinvested urban communities. The property also includes Furber Cottage, another historic building in great need of repair. 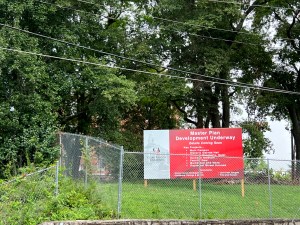 Clark Atlanta University’s sign sits on the same property as the burned out Gaines Hall. (Photo by Maria Saporta.)

“We think we can get a groundswell of support from historical philanthropists,” French said optimistically before adding a sobering thought. “Gaines Hall is going to be a challenge. Since I’ve been here, people would like to see a plan and what the final cost is going to be.”

French said he does not know whether Gaines Hall can be saved until they know the cost of restoration, which he estimated could be between $35 million and $45 million. French is more confident that Furber Cottage can be preserved.

In a driving tour of the campus, French pointed out other properties that Clark Atlanta owns, including the beautiful Park Street United Methodist Church, which dates back to 1912.

“When we received it, it was already in disrepair,” French said. “It’s at the front door of the Atlanta University Center.” 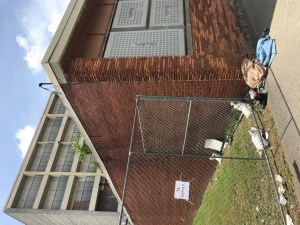 The historic Paschal’s Motor Lodge, owned by Clark Atlanta University, in need of being restored. (Photo by Kelly Jordan)

“Paschal’s is a historical institution,” said French, adding that CAU had studied the possibility of expanding its cancer research center on the property.  “The university is doing diligence on several options currently,” French said.

Clark Atlanta has a priority of expanding the cancer research center. It originally considered Paschals for that facility. French was asked to do feasibility diligence.

“Given the toxic materials that would need to go back and forth, it could not be housed in a residential neighborhood,” French said. “It’s really not feasible to have a cancer research center there. We have been talking to several developers about a possible hotel and restaurant.”

French would love to have those development plans include the preservation of Paschal’s, and he envisions it becoming a galvanizing spot for the whole AUC complex — including a hotel, convention and meeting spaces.

In the past couple of years, HBCUs have become recognized as essential to fostering greater diversity in higher education and the workforce, and that has led to many HBCUs receiving record philanthropic and corporate donations. For example, Clark Atlanta now has an endowment of $126 million, a high watermark for the school but a far cry of the endowments of more established private universities. 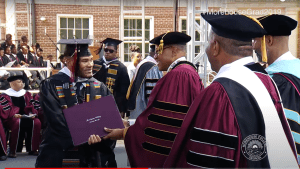 George T. French III receives his diploma from Morehouse University President David Thomas on May 19, 2019, when his father was negotiating to become president of Clark Atlanta University. (Screenshot of Morehouse College’s 2019 graduation video.)

The renovation and restoration of Clark Atlanta’s historic holdings will not be cheap, and it is a venture that CAU can’t do by itself.

“It’s a blessing to be a landowner,” French said. “We need to find a way to partner with the community to use some of these resources.”

Of course, French also is focused on leading a major university. When asked about what he would like to accomplish during his tenure as CAU’s president, French was quick to respond.

After years of inactivity, there finally appears to be real movement on preserving the irreplaceable history that exists on the Westside. And because of its amazing land holdings, Clark Atlanta is positioned to become the pivotal player in the revitalization and preservation of the historic assets on the Westside.