“Class of ‘65”: The moral guts of a bullied middle child 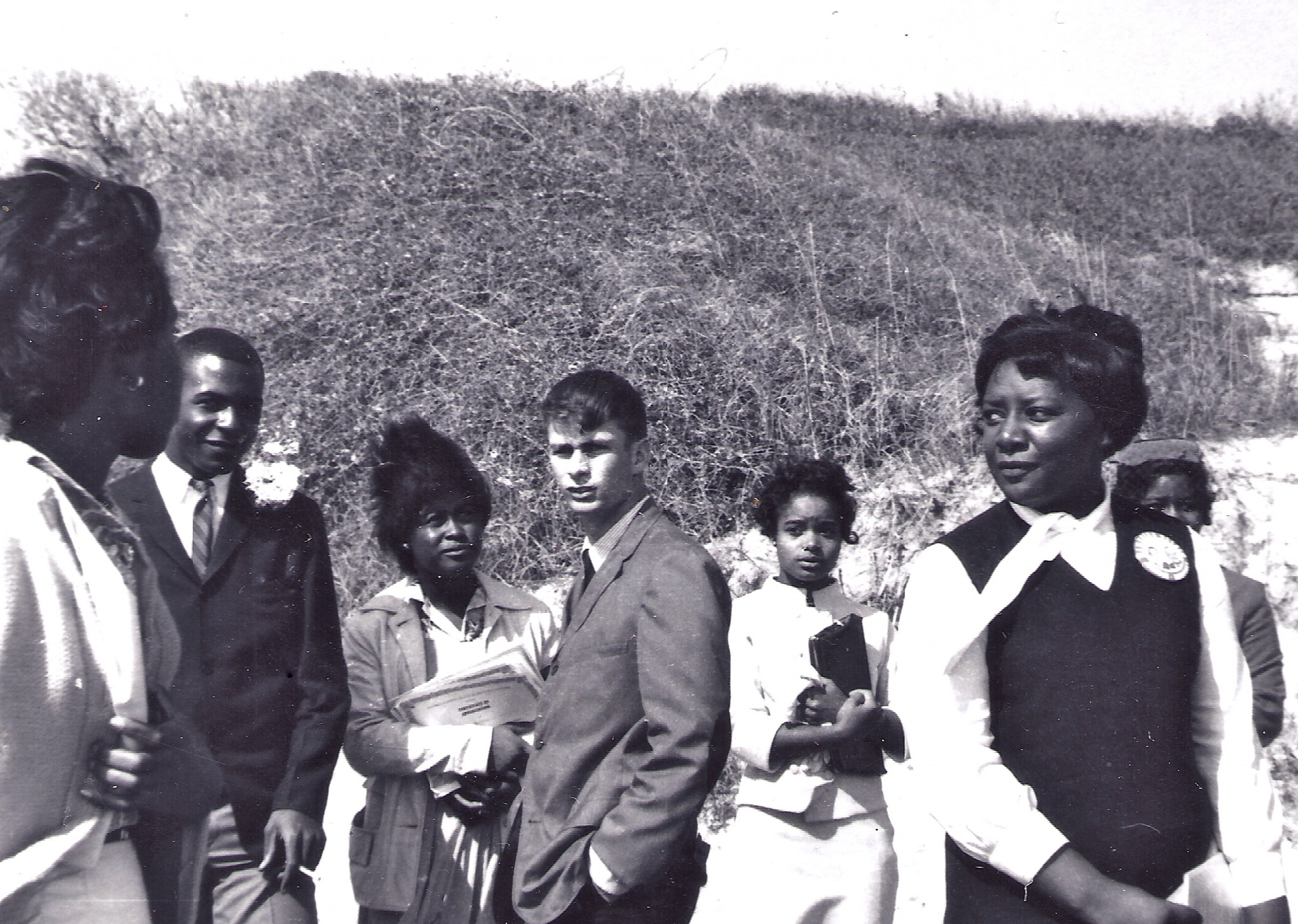 Greg Wittkamper with some of the students who desegregated Americus High School in 1964. 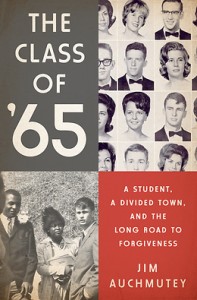 On March 31 at the Carter Library, Greg Wittkamper is scheduled to re-tell some of the amazing story of reconciliation with his Americus High School classmates who bullied and nearly killed him for living in a mixed-race community that gave rise to Habitat for Humanity.

The story forms the book “The Class of ’65: A Student, a Divided Town, and the Long Road to Forgiveness” by noted Atlanta author Jim Auchmutey, scheduled for release next week.

How and why did Wittkamper put up with the death threats, physical attacks, insults, ostracism, urine in his locker and more? What made him stay despite bombings, KKK cross burnings and drive-by shootings of the communal farm where he lived? Where did his teenaged self find the guts to face the hostility every day for three years and graduate?

The simple answer is that he believed in the right to have the friends he wanted and live where he chose. But what intrigued me was Wittkamper’s position in a family led by a true believer, who thrust Greg and his brothers onto the front line of civil rights. When a parent goes to extremes for faith or other unseen force, the child can become collateral damage.

When we talked, I discovered a more complex answer to Wittkamper’s survival. He was a middle child seeking to prove his mettle, especially to a bully in his own home: His older brother Billy spent a year in the same school before moving 850 miles away.

Without Billy, Greg might have decided against taking a stand. 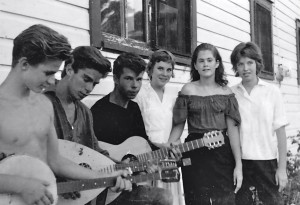 Greg Wittkamper (left, with his brother Billy) tries out a banjo for friends in 1962. Credit: PublicAffairs Books.

The Wittkamper brothers were raised in a tough household with a strict code of right and wrong and punishment to enforce it.

Greg was maybe age 3 when Billy, two years older, showed him a 3-inch razor strop in a shed behind their house. Billy was quite familiar with its results. “I knew that I should never get our dad mad enough to use it on me,” Greg said in a phone interview from his home in West Virginia. “Billy rebelled against Dad, who he thought was way too old to have children.”

Their minister father, Will, was 54 when Greg was born. A conscientious objector in World War I, Will Wittkamper “was a minister who couldn’t keep a job,” Auchmutey writes. “In a decade as a clergyman with the Disciples of Christ denomination, he had been booted out of every church he had pastored, mainly because of his stubborn insistence on counseling young men to resist military service. This was not conventional advice during World War II and the surge of patriotism that followed the great victory.” 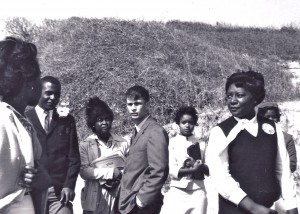 Greg Wittkamper with some of the students who desegregated Americus High School in 1964.

The spankings ended when Greg was almost six and the family moved near Plains, Ga. in 1953, to an integrated Christian farming community called Koinonia (a Greek word meaning communion).. The parental pacifism didn’t extend to Billy, who “was bigger and tended to be a bully,” Greg said. “He would get behind me or other kids, and he’d hit you and make a frog on your arm. All the little kids at Koinonia were scared to death of him.”

Greg had two younger siblings, David and Danny, but only competed to beat Billy. “Anything he could do, I tried to do better,” he said. “I call it the second son syndrome.”

The Wittkampers entered an unwanted spotlight four years after their community founder Clarence Jordan offered to help enroll the first black students at what would become Georgia State University. His 1956 action angered the state governor and riled up the sheriff and residents of Sumter County around Koinonia. The farm became the target of vandalism, a bombings, shootings, cross burnings, and an economic boycott.

In 1960, after Billy and two Koinonia girls were rejected from enrolling at Americus High School, the ACLU sued on their behalf, and a federal judge ruled that they had been excluded because of their parents’ religious and social beliefs. Once they enrolled, peers began persecuting them.

“The Class of ’65” author Jim Auchmutey

“Billy may have had the toughest time of it,” Auchmutey wrote. “The southern code of chivalry dictated that no one lay a hand on the girls, but there were no such compunctions when it came to boys … Along with the taunting and vandalism the others experienced, he got pushed on the stairs and popped in the back and received threatening letters. Reflecting on it later, he would laugh and say that it could have been worse. Billy had stuttered since childhood and played it up whenever he was menaced by others. ‘I think they thought I was a moron and left me alone sometimes.’”

Billy had no interest in fighting Koinonia’s battles at the high school. He became, in essence, a conscientious objector.

“Near the end of the school term, his parents asked him whether he would rather continue his education somewhere else. Billy despised the high school and hated the heat, humidity, and insects of southwest Georgia, so he leapt at the chance to escape … to the Chicago area, to Reba Place, a Mennonite community with long-standing ties to Koinonia. It turned out to be one of the best things that could have happened to Billy, but it wasn’t so good for Greg, who wouldn’t have his older brother to lean on when he entered the crucible.” 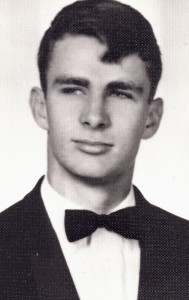 The next fall, with his brother gone, Greg entered high school as a freshman and a wide open place to leave his mark as more of a survivor than his brother had been. “My older brother had felt that kids should not have had to fight the battle all day long and do it again the next day. He resented it and thought it was child abuse,” he told me. “I wanted to prove I could do it.”

He tried being invisible, which wasn’t hard; his classmates mostly shunned him. “We despised Koinonia and all it stood for,” recalled classmate Joseph Logan in the book. “You have to put up with a wart until it goes away; that’s how we felt about Greg.” (Logan reconciled with him 41 years after graduation).

An indifferent student, Greg failed freshman algebra and Latin. The boycott and violence caused Koinonia to shrink, and to find more stability, his family moved for a year to North Dakota. Greg made up his grades and “found myself a bit,” and returned to Americus pumped up for his final two years at his all-white high school, taking on his brother and the status quo.

“When I returned I was two inches taller,” Greg said. “After my brother tried it [giving a frog] again on me, word got around Koinonia that Greg whipped Billy.”

At school, Greg remained unmoved in the face of continued harassment, targeted because he lived in a place where blacks and whites mingled, and befriended people outside his own race. When some of the school’s biggest athletes ganged up on him and one smacked him in the face, Greg told his attacker that he loved him.

“I started to own the battle and adopt it as part of my faith,” Greg said of civil rights. “By my senior year I would have wholeheartedly been killed for my friendships and to make a statement that this is how it feels to be treated like them. Every day we were ostracized and no one on any day looked at us and said, ‘Great job’ or showed us any means of empathy. If they had, it would have been social suicide. I was already dead, so it didn’t matter to me.”

Billy didn’t communicate much with his brother. When Greg graduated, and a classmate shook his hand, Greg felt that by surviving the war zone for three years, he had outlasted Billy. “I was a fixture there,” Greg said. “He never really bought into the whole thing.”

Today, Greg’s relationship with his older brother remains close. Billy is retired after working in interior decorating and real estate and lives with his family near Chicago. Greg laughs that after all that criticism of their father, Billy was past age 50 when he became a dad.

I asked Greg if he might have left Americus High School and shrunk away from the civil rights struggle without his older brother and the sibling rivalry. “Maybe,” he said. “Who knows?”

“I do think my family made me tough,” he said. “Emotionally, not so tough, but physically pretty tough. Emotionally not so tough because still when I talk about this, I get a lump in the back of my throat. When people who are in a war zone are your loved ones, it’s hard enough to see them ignored.”

You’ll have to read the book to find out how Greg Wittkamper reconciled with his “Class of ‘65” classmates. Another reunion is scheduled next month in Americus. The remarkable peacemaking affirms the stand he took in their midst, with conviction fueled by family competition. For those of us who grew up in families like the Wittkampers, his story of survival and triumph is particularly inspiring. To survive, a child raised in a culture of fervent belief lives with a peculiar gift and a burden that must be reconciled internally and with the outside world.

“I have no regrets, especially with what happened with almost all the students I went to school with,” he said. “I wouldn’t trade anything I went through for the letters written to me from them. I hope the book helps the world become better place in the long run. I think there’s a lot of hope in it.”

Previous Article
Leveraging Your Home During Tax Season
Next Article
Shining a spotlight on our Civil Rights history; hoping to preserve our precious past