For Clayton County Commissioner Sonna Singleton, it came down to letting the citizens decide.

And so Singleton cast the deciding third vote in favor of a one-penny MARTA sales tax to be on the ballot in a referendum before voters during the November general election.

The vote Saturday morning ended up being 3-to-1 in favor of the full penny sales tax for MARTA. Voting in favor of putting the referendum before voters were: Commission Chairman Jeff Turner, Vice Chair Shana Rooks and Singleton. 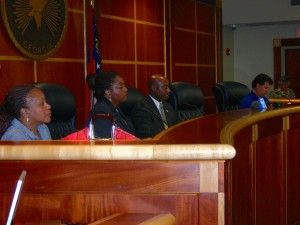 Although Michael Edmondson voted against the resolution, if there had been slight amendments made to the contract, he likely would have voted yes. But the other commissioners didn’t want to take a chance that the amended contract would have been invalid if it had not been approved by the MARTA board before the July 6 deadline (120 days before the Nov. 6 election).

Singleton’s vote was a shift from her stance on Tuesday night when she limited her support to a half-penny MARTA sales tax, which would have only paid for bus service in the county.

The Clayton Commission voted 3-to-2 Tuesday in favor of the half-penny, but the MARTA board turned down that proposal Wednesday morning at a specially-called board meeting.

Instead, the MARTA board insisted that Clayton would need to join regional transit by contributing a full penny sales tax. A full penny would pay for buses and eventually commuter rail or another mode of “high capacity transit.” 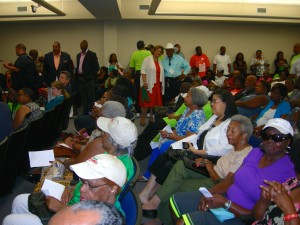 So the Clayton commissioners had until Sunday to meet to either approve the MARTA resolution or to table this opportunity for transit. Clayton has been without its own bus service for more than three years when commissioners decided the county could no longer afford to subsidize its C-Tran buses.

A flurry of activity and behind-the-scenes lobbying has been underway since Wednesday’s MARTA board meeting.

An email from Commissioners Gail Hambrick and Singleton to their constituents complaining about the ups and downs of negotiations with MARTA and the negative tone of a letter sent by Norfolk-Southern about the prospects of a commuter rail line dashed the hopes of pro-transit groups.

When the Clayton Commission convened Saturday morning, a standing-only crowd was waiting on pins-and-needles to see if any of their hard work of bringing out the masses would have an impact. 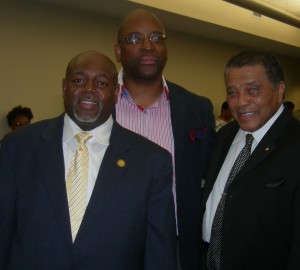 They wondered if there would even be a quorum, and if there were a quorum, would any of the commissioners who had been opposed to a full penny agree to change his or her vote.

Earlier in the week, the Citizens for Progressive Transit had thought Commissioner Hambrick was their best hope. But she didn’t even show up Saturday morning saying she had holiday plans.

Some pro-transit folks were whispering among themselves. They had heard that Edmonson would be changing his vote, and voting yes. That surprised many because had been viewed as the commissioner who had been the most vocal against a full penny.

Edmondson did engage in a detailed Q&A with the county’s attorney, Jack Hancock, where they dissected the MARTA-Clayton contract with a “worst-case” scenarios.

Finally, MARTA board chairman Robbie Ashe assured the Clayton Commissioners that MARTA was not going to go bankrupt and that it would honor the spirit of the contract. 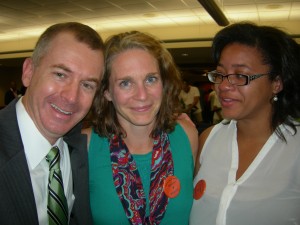 Brought to tears after the vote – Lee Biola of Citizens for Progressive Transit; Colleen Kiernan and Brionte McCorkle, both of the Sierra Club

“We are committed that if Clayton is willing to trust us as a partner, we will earn that trust every day,” Ashe said.

At that point, Rooks made a motion to accept the MARTA resolution. Singleton seconded that motion, the first solid indication that there were at least three votes for a full penny.

Edmondson tried to get an amended resolution considered, but Rooks decided to call a vote on the first resolution. 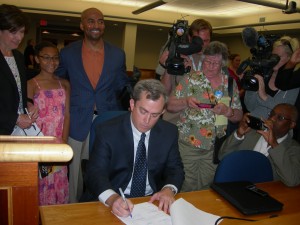 “What we are doing is allowing people to vote in November,” she said.

“Let us vote!” audience roared in unison as the resolution passed 3-to-1.

Immediately after the vote, Singleton was asked why she ended up voting with Turner and Rooks.

“We are really just giving the citizens to vote on this,” Singleton said. “I definitely have some concerns about the contract. But I trust the voters to make the right decision. MARTA has assured us that they will continue to work with us. I still have some great concerns, but I’m going to let the citizens decide.”

Hugs and cheers filled the room. Several of the leaders of organizations who have been working to get the vote through the Clayton Commissioner, were brought to tears. 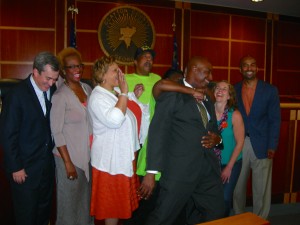 Chairman Turner was particularly pleased that they passed the MARTA resolution “intact,” because it would be legally clean that way.

“There’s no way I was going to let this opportunity pass us by,” Turner said. “I think all of us commissioners have the constituents’ best interests at heart. Let’s just let them help decide the future of Clayton County.”

Keith Parker, MARTA’s general manager and CEO, said this was only step three in a five step process. First they had to get the bill through the state legislature, thanks to the bill by Rep. Mike Glanton (D-Clayton). Second, a resolution had to pass the MARTA board. Third was getting approval from the Clayton Commission.

“We still have work to do,” Parker said. “Before we do the victory dance, let’s cross the finish line.”

Oh come on Parker, MARTA should let Clayton enjoy this hard-fought victory as the county continues on its journey….