The Clayton County Commission and MARTA entered a staring down contest Tuesday night.

The question that will unfold in the next five days is who will blink first.

For Clayton County residents, the answer could either be voting on a full-penny sales tax to become a full MARTA partner, investing in both buses and rail transit, or to continue being a county without any local transit service.

In other words, the Clayton County Commission likely will be facing an “all or nothing” choice of joining MARTA. 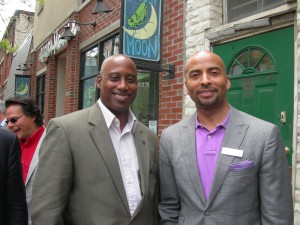 The two other commissioners — Chairman Jeff Turner and Vice Chair Shana Rooks — both spoke passionately for the commission to pass a full penny and become a full MARTA member along with Fulton County, DeKalb County and the City of Atlanta.

Robbie Ashe, chairman of MARTA’s board, told the Clayton commissioners that he did not expect that his colleagues would accept Clayton County as a partner if it only approved a half penny. A full penny would be needed for Clayton to join MARTA.

The way the current state legislation is written, Clayton County can only increase its sales tax for transit if it is part of the MARTA system rather than Clayton establishing its own bus system.

The MARTA board is holding a special meeting Wednesday morning at 10 a.m. to vote on whether it would approve the half-penny proposal that passed Tuesday night in a 3-to-2 vote.

“My prediction is that we will vote to not approve a half-penny,” Ashe said. “We will then have a vote to approve a full penny. We will send that back down to Clayton.”

The Clayton Commission would have until Sunday, July 6 to vote on whether to vote on a full penny or to be a county without its own transit service. The only transit that serves Clayton is the Xpress bus system that is run by the Georgia Regional Transportation Authority.

The county’s C-Tran bus system was discontinued several years ago when the Clayton Commission decided it could not afford to subsidize its operations.

Chairman Turner said he did not know whether the commissioner would be able to meet over the weekend given that it was the July 4 holiday. But because of the way the legislation is written, Turner said that the last day a vote could be taken would be on Sunday, July 6 .

There is no guarantee that the three commissioner who voted for the half-penny would be inclined to change their vote and support a full penny.

Commissioner Hambrick was concerned that a full penny would mean Clayton’s sales tax would total 8 percent, which would put it at the same level as Atlanta and higher than many of its other neighboring counties.

It did not help that Norfolk-Southern railroad sent a letter disputing an independent feasibility study on the costs and timing to implement commuter rail service along its lesser-used tracks serving the south side of the metro area.

MARTA General Manager Keith Parker said he was disappointed in Norfolk-Southern’s letter, but not surprised. He told the board that after getting a letter from the railroad, he has had a conversation “with the owner of the corridor, and they expressed a willingness to work with us on the corridor.”

Either way, Parker and Ashe assured the Clayton commissioners that if they approved a full penny, a half penny would go toward establishing a first-class bus service. Revenues from the other half-penny would be set aside in an escrow account that would only be invested in Clayton transit projects.

Parker then said MARTA and Clayton County would establish a “rapid transit study committee” to make a recommendation on how those escrow funds should be invested.

“We have put forth engineering estimates that we think are sound,” said Parker, who still believes an agreement with Norfolk-Southern is possible. But he went on to tell Clayton Commissioners that “we will work with you on other options” so that Clayton would end up having “high capacity transit line” in the not too distant future.

Once the vote was taken, the overflowing, packed room of several hundred citizens booed the board and shouted “Recall, recall, recall.”

Earlier, during the public commentary period, Georgia’s AFL-CIO President asked those who supported a full penny to stand. More than three-quarters of the room stood tall, clapping.

Citizen activist Maceo Williams reminded the commissioners that if they didn’t vote for transit, they may not be re-elected.

Now the questions are whether Turner will be able to get his colleagues back together to vote before the July 6 deadline, and whether one of the half-penny commissioners will change his or her vote to favor a full penny when the choice is that or no transit at all.

It’s high stakes poker in Clayton, and one wonders who will blink first.