Clayton’s Nov. 4 MARTA vote could shift metro growth to the south side

The first in a two-part series about the  economic opportunity on the southside of metro Atlanta. Next week: unlocking the secret treasure of Fort McPherson.

For decades, metro Atlanta’s center of gravity has grown to the north – creating a lopsided region.

But one vote on Nov. 4 could do more to reverse that trend than any development since the expansion of Hartsfield-Jackson International Airport.

It would be the first time since the MARTA Act was passed in 1971 that a new county would have joined the “regional” transit system – partnering with Fulton and DeKalb counties and the City of Atlanta.

For too long, Clayton County has been the mistreated stepchild in metro Atlanta. It has seen economic growth and people with means leave the county while poverty has become a bigger problem.

The county had to discontinue its limited bus service back in 2010 because county commissioners said they couldn’t afford it. So the region’s fifth largest county has not had its own transit service for the past four years – making it even harder for people in Clayton to live without a car.

But all that could change in a matter of months. 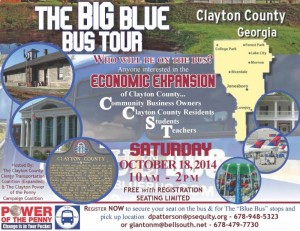 If Clayton voters approve the MARTA penny on Nov. 4, initial bus service will be introduced in March of 2015. Half of the penny will be dedicated to implementing an extensive bus system that would link into the existing MARTA network.

The other half penny would be put into an escrow account that would be invested into a high-speed transit system – either commuter rail or bus rapid transit within the next five to seven years.

Communities that invest in transit and alternative modes of transportation will be better positioned for growth in decades to come than communities that continue to invest in roads and bridges for cars and trucks.

Nathaniel Smith, founder and CEO of Partnership for Southern Equity, is part of a coalition of organizations that is helping Clayton see the “Power of the Penny.”

On Saturday, Oct. 18, the coalition helped put on a four-hour bus tour to explore the “Economic Expansion” of Clayton County if the MARTA penny passes by asking: “Who will be on the Bus?” It included the “Clayton County Clergy Transportation Coalition” and the “Clayton Power of the Penny Campaign Coalition.”

For Smith, it’s about “how we help the region grow in a balanced fashion.” The tour showed how the new MARTA bus routes “could help facilitate new economic development opportunities in Clayton.”

It will take an adjustment in regional thinking to get people to start looking south for economic opportunities. Habits of concentrating development dollars north of I-20 and even north of I-285 in Cobb, North Fulton and Gwinnett will be hard to shift.

But already there are some signs of change.

Porsche is leading the charge with its North American headquarters development next to the airport – with its promotion of Aerotropolis. The redevelopment of Fort Gillem also is providing new opportunities for companies interested in logistics and distribution facilities.

And the Atlanta BeltLine is continuing to invest in southern portions of its 22-mile ring around the central city.

Creating a transit system to serve the south metro area is a necessary piece in creating a network for economic growth, and having Clayton become a full member of MARTA will help pull the center of gravity back to the center of the region.

Smith said it’s possible that Clayton will pass MARTA and Cobb will not pass its Special Local Option Sales Tax,, which will create even more of a traffic problem for the new Braves baseball stadium near I-75 and I-285.

“I do feel Clayton has not received the level of respect and support needed for their vision from regional leaders,” Smith said, adding that it’s time to embrace the substantive change that’s underway in Clayton. “If not now, when? If we are going to succeed as a region, we have to be willing to accept and welcome every one and every place as an asset in the region.”

If Clayton voters do embrace MARTA, Smith is convinced that “economic development will follow infrastructure” investments, especially investments in transit.

“I think the market will definitely rediscover Clayton,” said Smith, who added that the region also has to be careful that existing residents do not get priced out of the market.

That said, the Clayton coalition that is behind the “Power of the Penny” for MARTA is symbolic in several ways. It is a grassroots and inclusive movement that is multi-racial, multi-ethnic and multi-generational.

In many ways, that coalition represents the diverse complexion of metro Atlanta’s future. Clayton and MARTA are showing both the rest of the region and the state how we can address not only our transportation problems but our disparities in growth and opportunity.

Who knew Clayton County’s MARTA vote on Nov. 4 would mean so much to our region and to metro Atlanta’s center of gravity and how we grow for decades to come.