One of the more important corporate civic roles in Atlanta is the person who serves as president of the Coca-Cola Foundation.

Helen Smith Price has served in that role since 2016 until she retired Nov. 15. Before becoming its president, Price served as the Foundation’s executive director since 2001. Price joined the company in 1993 as an auditor.

In a recent telephone interview, Price said she’s just as excited about the Coca-Cola Co. today as she was when she joined the company 27 years ago. 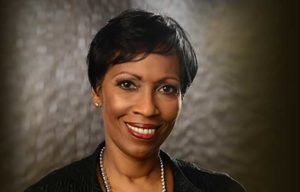 “For little girl who came out of Bankhead, it’s been quite an experience,” said Price, who credited her mentor – Ingrid Saunders Jones – for opening up her eyes. “Ingrid was phenomenal. I learned a lot about people, the company and the community from Ingrid.”

Price confided that she had planned to retire in the first half of 2021, but the Coca-Cola Co. offered a “very generous” voluntary retirement package, which was just too good to turn down.

“There are things I want to do personally,” she said, adding that she had worked as an auditor at an accounting firm for six years and at BellSouth for nine years before she joined the company. “It’s just the right time.”

But she has no worries about the Coca-Cola Co.’s relationship to Atlanta.

“The thing that’s remained constant is Coca-Cola’s commitment to the community,” Price said. “The sense of purpose is the same today as it was 134 years ago. What’s different is how we do it, how we respond to communities in Atlanta and across the globe.”

The Coca-Cola Foundation was started in 1984 under the leadership of then-CEO Roberto Goizueta, who targeted investments in education. The Foundation surpassed $1 billion in total giving when Price was at the helm. The company also expanded its global giving focus to include women’s economic empowerment, the environment (water conservation and sustainability) and well-being. 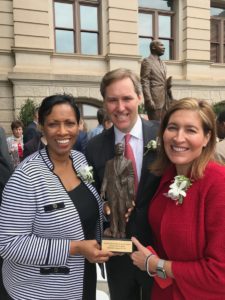 Coca-Cola’s Helen Smith Price, Matt Echols and Bea Perez at the 2017 unveiling of the Martin Luther King Jr. statue at the state capitol. Coca-Cola helped pay for the statue (Photo by Maria Saporta)

“Helen exemplifies our company’s purpose: to refresh the world and make a difference,” Bea Perez wrote in an email announcing her retirement. “As head of our company’s community and philanthropic work, Helen developed and led our giving strategies in our hometown of Atlanta and around the world.”

Price, however, isn’t worried about who will succeed her.

“We have a great team,” she said. “The good news is that Coca-Cola associates are very community minded.”

Coca-Cola has pledged to give back at least 1 percent of what it earns.

“The more the company earns, the more the company gives back,” Price said. “Last year, we gave away $125 million. We exceeded the 1 percent by giving away 1.3 percent of what we earned last year. We are heavily invested in Atlanta and Georgia because it is a Coke town.” 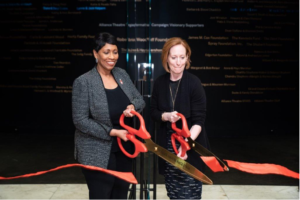 In 2019, the Atlanta area received 15 percent of the Foundation’s total giving.

When asked whether she would remain involved in the community, she laughed.

Price serves on the boards of Spelman College, the Westside Future Fund and Children’s Healthcare of Atlanta Foundation. She also was recently elected to serve as a lifetime member of the Woodruff Arts Center’s Alliance Theatre, and she plans to remain involved with the Rotary Club of Atlanta.

Price also serves on the board of Coca-Cola Bottling Company UNITED. 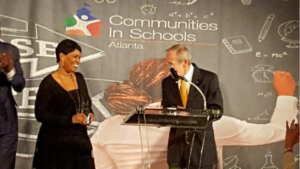 As a way of recognizing Price for her contributions, Spelman College announced Nov. 16 that the Coca-Cola Foundation is supporting a new scholarship in her honor. The Helen Smith Price, C79, Endowed Finish Line Scholarship will provide financial assistance to help high-achieving students successfully complete their Spelman education.

Looking ahead, Price said she is looking forward to becoming a Coca-Cola alumna, and she will be willing to serve in any way she can including helping her successor. As she said: “I’m just a phone call away.”