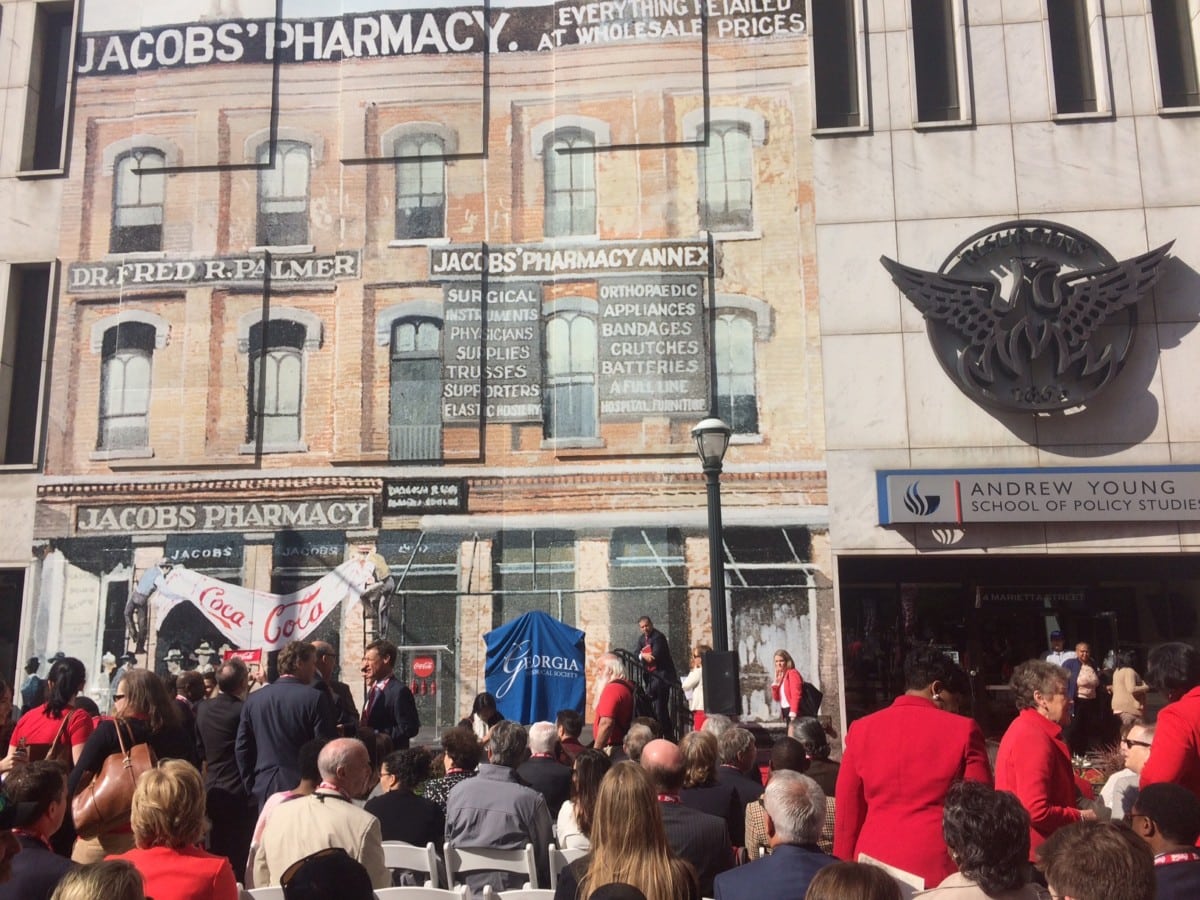 The Coca-Cola Co. took Atlantans back in time Monday when they adorned a building a Five Points with a life-sized photo depicting the long-ago demolished Jacob’s Pharmacy where Coke was first served and sold on May 8, 1886.

Jacob’s Pharmacy stood at 12 Marietta St. at Five Points, what has been the historic heart of Atlanta. 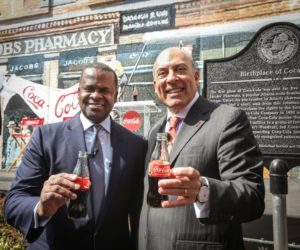 Atlanta Mayor Kasim Reed and Muhtar Kent on Monday enjoy a Coke at the site where it was first sold on May 8, 1886 (Special: the Coca-Cola Co.)

Instead of just seeing what is now Georgia State University’s Andrew Young School of Policy Studies (in a building that used to house the First National Bank of Atlanta), people could envision downtown Atlanta as it was when John Pemberton was alive. Pemberton was an Atlanta pharmacist who mixed the special concoction we now know as Coca-Cola.

“It’s really important for us to be part and parcel of the fabric of society and the Atlanta community,” Muhtar Kent, chairman and CEO of the Coca-Cola Co., said in an interview after the unveiling of a new historic marker identifying the site where the company began 130 years ago.

In celebration of the moment, Kent also announced a total of $1.8 million in grants from the Coca-Cola Foundation to support improvements in downtown Atlanta.

It is donating $1 million to the Georgia World Congress Authority to support the expansion of green space and updates to Centennial Olympic Park; it is providing $500,000 to the PATH Foundation to help connect COP with Atlanta’s westside neighborhoods; it is giving $250,000 to the Center for Civil and Human Rights to support underwriting admission fees for metro Atlanta students; it also is contributing $50,000 to the Atlanta Union Mission to empower women living at My Sister’s House; and it is giving $30,000 to the Children’s Museum of Atlanta. 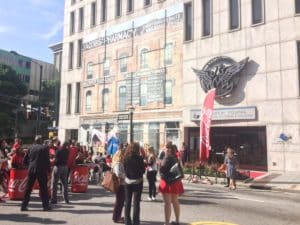 Asked if Coca-Cola would be willing to paint a permanent historic façade of Jacob’s Pharmacy on the Five Points tower, Kent said: “It’s a good idea.” And he added they would hope to make that a reality.

The current image is just a photo screen film that is not durable enough to become a permanent installation.

That would only be one more way to solidify the role Coca-Cola has played in Atlanta. Kent said shared the story how the “most refreshing and delicious beverage” was not an overnight success.

“The first year, there were and average of nine drinks per day sold,” Kent said. “Today we’re in 207 countries…, and we sell 1.9 billion drinks every day. Not too shabby.”

Kent went on to say the company is not in two countries in the world – Cuba and North Korea. Former Atlanta Mayor Andrew Young, while everyone was posing for pictures, started talking to Kent about he could enter those two countries.

Mayor Reed told a story of a recent trip to Africa with Young when he met a woman entrepreneur who was selling Coca-Cola thanks to its grants supporting the empowerment of women worldwide. She called him: “The mayor of Coca-Cola” – a title he happily accepted.

“Coca-Cola is the city of Atlanta’s gift to the world,” Reed told the crowd of VIP’s who had gathered for the unveiling of the marker. 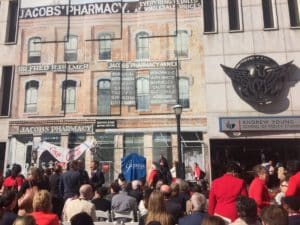 The Georgia Historical Society has been working with the state’s signature companies to be part of a Georgia Business History initiative, and it already has installed markers for Waffle House and Delta Air Lines with many more on the horizon.

Todd Groce, president and CEO of the Georgia Historical Society, said the initiative “ensures that current and future generations will no only understand the importance of this intersection as the birthplace of one of the world’s most successful and recognizable brands, but also the importance of this iconic Georgia company as a key driver in our state’s development and growth for the past 130 years.”

The text of the marker reads:

“The first glass of Coca-Cola was sold for five cents on May 8, 1886, at Jacobs’ Pharmacy, a popular Atlanta soda fountain that was located on this corner. Coca-Cola was created by Atlanta pharmacist John Pemberton in his laboratory just a short walk from this location. Atlanta businessman Asa Candler began to purchase the rights to the formula for Coca-Cola in 1888 and founded The Coca-Cola Company in 1892 as a Georgia corporation to manufacture and advertise Coca-Cola across the country. Candler sold the company in 1919 for $25 million to a group of investors that included Ernest Woodruff. His son, Robert Woodruff, led Coca-Cola for more than half of the twentieth century, expanding Coca-Cola into a global business. Today Coca-Cola is the most widely recognized consumer product in the world.” 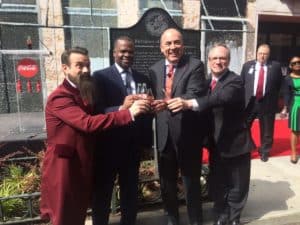 In the interview, Kent was careful to say that Coca-Cola’s philanthropy is global, but he added: “The foundation plays a very important role in Atlanta and Georgia. The way we think about ourselves is that yes, we provide refreshment. But we also are here to make a difference. Our stakeholders are what we call community. To optimize that, we have to create long term value.

“Atlanta is our home, but it’s also part of our neighborhood,” said Kent, who remembered first moving to Atlanta in 1978 when Atlanta’s population sign flashed 650,000 people and today it’s 10 times that number. “This has been explosive growth and inclusive growth. Not everything can be perfect. But we can make it a little better. I am very excited about the future Coca-Cola and the future of Atlanta.”

And the he played off Reed’s comment of how Coke is Atlanta’s gift to the world.

“We take Atlanta to the world,” Kent said. “And we bring the world to Atlanta.”