Hala Moddelmog, president and CEO of the Woodruff Arts Center, in her office with a bust of Robert W. Woodruff. (Photo by Maria Saporta.)

In an unprecedented move, Coca-Cola Chairman and CEO James Quincey will chair the 2021-2022 Woodruff Arts Center corporate campaign. The Coca-Cola Foundation also has made a record $2 million leadership gift towards the annual campaign.

It is the first time in decades that a top Coca-Cola executive has taken on such a leadership role at the Woodruff Arts Center, which is named after the legendary Coca-Cola leader Robert W. Woodruff. 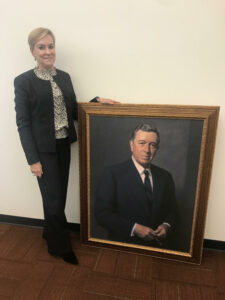 Hala Moddelmog, president and CEO of the Woodruff Arts Center, stands next to an iconic portrait of Robert W. Woodruff. (Photo by Maria Saporta.)

Moddelmog had the idea about nine months ago to ask Quincey to chair the campaign as a much-needed boost for the Arts Center, which was weathering the effects of the pandemic and the lack of in-person audiences.

“James wants to be more involved in the Atlanta community,” Perez said in an interview. “When Hala called, it was a real easy yes. He was inspired to lead it because of Robert Woodruff. This could not be more perfect. James is passionate about the arts.”

The Woodruff Arts Center is the leading arts organization in the Southeast – the governing entity for the High Museum of Art, the Alliance Theatre and the Atlanta Symphony Orchestra.

“I’m honored to chair this year’s Woodruff Arts Center campaign, and I encourage others to join me in this important movement and contribute to this year’s campaign,” Quincey said in a statement. “As we begin to return to in-person experiences, it’s critical the arts are accessible and available to all.”

The annual corporate campaign has been an important source of revenue for the Arts Center, at one time generating more than $12 million a year. But because of the pandemic and the economic struggles of some of its major donors, last year’s campaign raised only $7 million.

“And we had no earned revenue,” said Moddelmog, who started as the interim CEO in 2020 but quickly became the Arts Center’s permanent CEO. The goal for this year’s campaign is back to $12 million.

“James is highly competitive,” Perez said. “He wants it to be more than $12 million.”

Moddelmogg was quick to add that attorney John Yates has been instrumental during this period, and he continues to support the Center as the chair of the board’s development committee.

Because of Quincey’s involvement and financial support, Moddelmog hopes other executives and donors will step up their support of the Arts Center.

In addition to chairing the campaign, Quincey will host a reception for the High Museum’s unveiling of the Obama portraits on Feb. 21 – Presidents’ Day. Quincey also has agreed to host a closing night of the campaign next spring when he will pass the baton to another high-profile corporate leader to chair next year’s campaign.

Moddelmog said that as long as she is at the helm, she will follow the traditional model of getting leading CEOs to chair the annual campaign. Moddelmog has made a three-year or more commitment to the Arts Center.

She also is committed to spreading the word of how the three cultural divisions of the Arts Center have become much more accessible to the community at large, focusing specifically on minorities and people with limited means.

“I was on the governing board for three years. Until I got here, I had no idea of the access we offer,” Moddelmog said, adding that she would like to help every corporation in Atlanta to showcase diversity in the arts and within their organizations. “I want people to know by the time I leave about all we offer the community.”

For Quincey, chairing the campaign is one way for him to reinforce his ties to Atlanta. When he first was named CEO, Quincey was living in London for family reasons. Then with COVID, work became more virtual. But now he has fully moved to Atlanta, and he is living in a Midtown high rise. He enjoys the walkability of the neighborhood and riding a scooter on the BeltLine.

“You will start to see a lot more of him,” Perez said. “We also have other Coke executives on some of these boards. The Woodruff Arts Center will always have Coca-Cola’s corporate support. This is not just a one-and-done. The Center means a lot to us and a lot to the community.”