The company had received “several questions” on the company’s position on voting rights.

Karen Danielsson summed it up with to questions: “Should Coca-Cola even be involved in a discussion on voting rights? And I think it begs the question as to whether it’s worth the risk today for the company to be involved at all in politics or contributing money to politicians.” 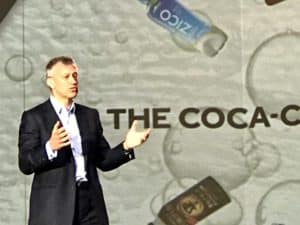 “While I certainly don’t see it as my role to weigh in on every issue, when it comes to Georgia and Atlanta and a certain set of issues, the company does have a point of view,” Quincey said. “We drive our business from Georgia and many of our employees in Georgia, and we need Atlanta and Georgia to be a great place to do business and a great place to be an employee and to live. “

Quincey said the company has been helping Georgia be the best possible location for the company for many decades throughout the 135-year history of the Coca-Cola Co.

“One of the things we pay attention to is the voting rights because we see voting as a foundational right, and its access should be broad-based and inclusive, Quincey continued. “So, from here, we will continue to engage with legislators of all sides, advocacy groups, business leaders and others on these issues. We will do this because it’s the right thing to do, and we are interested in creating a better shared future for everyone, particularly in our home state of Georgia.”

Then Quincey addressed the company’s stance regarding political contributions. 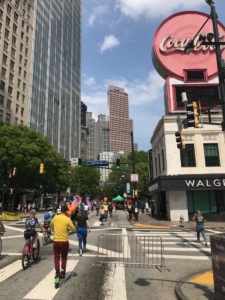 Quincey concluded by saying the company is being thoughtful with its review.

“We need to get it right,” he said. “It will remain very important that we continue to effectively advocate in the public policy arena to the things we believe in and that are right for our business, our employees and our shareowners.”

The company did not get off scot free.

During her presentation, Ufot tied public health to the issue of voting suppression.

“From health and well-being, to voting rights and racial justice, Coca-Cola must stop saying one thing and doing another,” Ufot said. “Consumers and investors are paying attention. I understand and applaud the value of a thriving business and strong profit. However, this should not come on the backs of the very communities and issues you claim to support. There is a clear business risk and fundamentally, you are on the wrong side of history….

“Coca-Cola is now claiming that it supports voting rights, but it funds the U.S. Chamber of Commerce, lobbyists and legislators that are trying to make it harder for people, especially from black and brown communities to vote,” Ufot continued. “Simply put, it’s time for Coke to walk its talk.”

Quincey said the company already was reducing the use of sugar in its products. It also undergoes an independent review by the independent Access to Nutrition Foundation based in the Netherlands. He urged shareholders to vote against the shareholder proposal.

Later the company announced the shareholder proposal only received 9.4 percent of the vote.