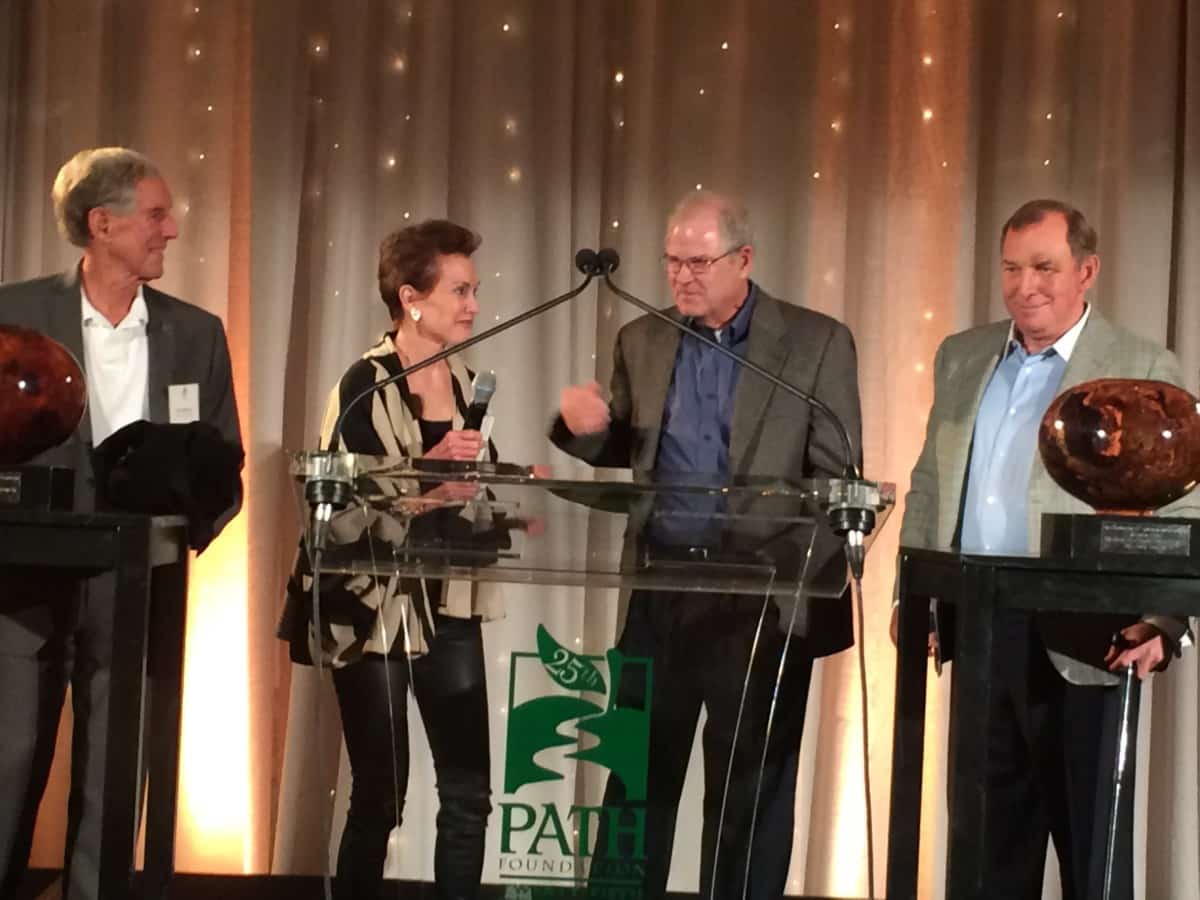 The recent ranking of the Philanthropy 400 by the Chronicle of Philanthropy showed little change among the order of Georgia’s major nonprofits.

The largest nonprofit in the state continues to be the Task Force of Global Health, which ranks seventh among all foundations nationally.

The other foundations in the top 25 are the National Christian Foundation (No. 9); the Boys & Girls Clubs of America (No. 16); Habitat for Humanity International (No. 20); and the American Cancer Society (No. 22).

In all, Georgia has 15 nonprofits in the Philanthropy 400 listing, one less than was reported in last year’s list. The Arthritis Foundation, which ranked No. 317 last year, did not make the 2016 list.

Universities also fared well including Emory University (No. 112); Georgia Tech (No. 242) and The University of Georgia (No. 279).

The rankings are based on the private support the nonprofits receive each year – including both cash and in-kind contributions.

Nationally, the Philanthropy 400 saw a switch with the top nonprofit in the country.

The Fidelity Charitable Gift Fund replaced United Way Worldwide in the No. 1 spot. Fidelity had private support of $4.6 billion compared to United Way’s $3.7 billion. Feeding America, which is based in Chicago, ranked No. 3, receiving $2.15 billion in support.

When attorney Ben Johnson introduced Chris Carlos as the 2016 Philanthropist of the Year at the National Philanthropy Day luncheon at the Georgia Aquarium luncheon on Nov. 1, he remembered attending the same luncheon in 1992 when the late Michael Carlos received the same award.

Johnson remembered Michael Carlos’ death in 2002 followed by his widow’s passing in 2011.

“The torch has now passed on to their beloved son,” Johnson said. He added that Chris Carlos has expanded the focus of the family’s philanthropy by giving to the Atlanta Ballet, Chris Kids (now Chris 180), the Atlanta Police Foundation, Zoo Atlanta and Children’s Health Care of Atlanta.

Then he compared himself to his father, saying he was a bit uncomfortable in the limelight.

“My father loved this much more,” Chris Carlos said.

Lucy Carpenter Vance was recognized as the Volunteer Fundraiser of the Year for her contributions to Families First, the Junior League of Atlanta and countless other foundations that support children.

Vance remembered her mother who taught her the importance of philanthropy at an early age.

“When I was in third or fourth grade, we were in charge of putting on the birthday parties for children at the orphanage,” Vance said. “That’s when I realized that life is unfair.”

Michelle Nunn, president and CEO of CARE, had just returned from Malawi, a small country in Africa, when she was on the program of the Rotary Club of Atlanta on Oct. 31.

“It’s easier to watch the election from Malawi,” Nunn joked before seriously addressing the challenges of poverty in much of the world. In Malawi, only 30 percent of the children go to secondary school. CARE was helping broaden the educational offerings in the area for children who she said want to become nurses, doctors, teachers and journalists. 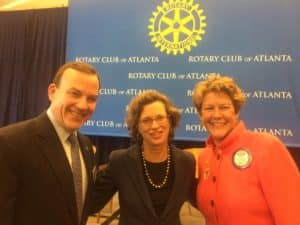 She then told Rotarians that extreme poverty has been reduced globally by about half in the 20 years, so progress is being made. She also credited several Atlanta institutions for helping realize that progress – the Task Force for Global Health, the Carter Center, among others.

“Atlanta is a bastion of optimism,” she said

Martha Brooks, who is vice chair of CARE’s board, interviewed Nunn, asking about the Syrian refugee crisis and the recent hurricane in Haiti.

“Haiti is the most impoverished country in the western hemisphere,” Nunn said, adding that CARE has provided over 80,000 meals to the country. CARE responds to international needs – whether they are brought on by natural disasters or manmade conflicts.

“There are 40 million in the southern African continent facing drought caused by global warming,” Nunn said. “Thirty percent of the population is hungry. CARE is helping with an integrated approach.”

CARE is helping farmers to be able to face the challenges so “they can rise above this level of drought.”

Both Brooks and Nunn urged Atlanta to support CARE initiatives – either by volunteering or contributing to the organization.

State of the Region 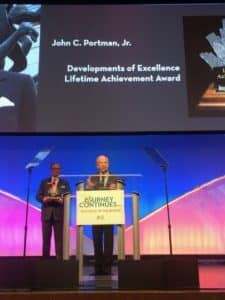 Atlanta architect and developer John C. Portman was given a Lifetime Achievement Award by the Atlanta Regional Commission at its annual “State of the Region” breakfast.

Portman’s son — Jack Portman— accepted the award for his father on Oct. 28, saying his father has always operated with both the right and left side of his brain.

The Atlanta Regional Commission will be moving its offices from the Loudermilk Center to Peachtree Center — a complex designed by John Portman — by the end of next year.

The PATH Foundation celebrated its 25th anniversary with a party put on by two of its largest benefactors – Jim and Sarah Kennedy.

The party, which was held at Flourish, was decorated with landscaping showing the multipurpose trails that have been built all over the region.

The party also recognized two of the key leaders of PATH — the founder and executive director Ed McBrayer and the long-time board chairman Bill Fowler.

Jim Kennedy called Fowler “truly a remarkable human being” who has set an example of grace and courage while battling MS for decades. “There is no better human being than Bill,” Kennedy said.

He also referred to McBrayer as the Johnny Appleseed for introducing and expanding bicycle and multipurpose trails to Georgia. “Nobody has done more for trail building than Ed,” Kennedy said. “You are my hero.” 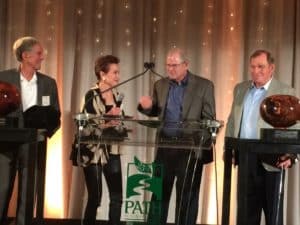