By Maria Saporta
As published in the Atlanta Business Chronicle on October 23, 2015.

Friedman, president and CEO of AFCO Realty, has had lupus — a chronic auto immune disease — since he was 19.

But Friedman has decided to go public because he is hoping to shine a light on the disease as a way to help others through the Georgia Chapter of the Lupus Foundation of America (LFA). 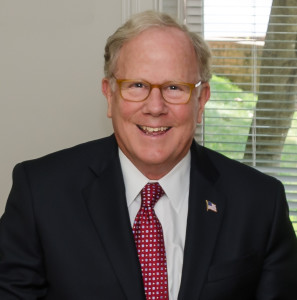 Friedman will receive the Mary Cann Achievement Award for Outstanding Volunteer Service at the 7th Annual Night of Hope Gala on Saturday, Nov. 14, at the Mason Fine Art Gallery. Friedman hopes to help raise $170,000 at the gala to benefit the Georgia Chapter.

Adam Goldberg, who lost his wife to lupus only five years after she was diagnosed, will be the Tomica Gill Courage Award Honoree that evening.

“As little as 15 years ago, no one spoke of lupus,” Friedman said. “I know from personal experience how difficult this disease can be. The lack of awareness can lead to years of misdiagnosis, and patients often endure many toxic treatments.”

Friedman, who was quite sick as a young man, was misdiagnosed for 23 years. Finally Friedman, who is in his mid-70s today, was told he had lupus when he was 42. One of the key messages he wants to share is that people can continue to live rewarding lives while suffering from the disease. He has held multiple leadership roles in the community including serving as the founding chairman of the PATH Foundation, chairman of the Buckhead Coalition and a past board member of the Atlanta Housing Authority and the Atlanta Union Mission.

The Atlanta Police Foundation held its 5th Annual Blue Jean Ball on Oct. 17 at the Cook Estate in Buckhead.

“The average award is $2,000, and that gets someone off the street,” Wilkinson said, adding that the proceeds from this year’s ball likely will lead to the arrest of at least 80 criminals. To date, tips to Crime Stoppers have led to more than 1,000 arrests.

Wilkinson credited the participants for the reason of this year’s success. KPMG presented the ball. Carol and Ramon Tomé served as honorary chairs. Carter’s Bob and Cathy Peterson served as the event chairs. And Jeff Sprecher of InterContinental Exchange, John Brock of Coca-Cola Enterprises, and Jim Hannan of Georgia-Pacific were some of the notables who attended the event.

Living legend Hank Aaron, the home run king of the Atlanta Braves, received one of the three awards. The other two went to GSU law professor Michael Landau and IP attorney Bill Needle. 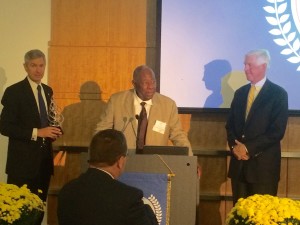 Aaron joked about walking slowly to the podium with a limp — saying people may doubt he ever hit 755 home runs.

Then Aaron turned to GSU’s Becker and told him to keep on building. “I hope one day we can find a way to build a stadium in the place where I hit the home run (No. 715 that broke the record).”

The lunch was special in other ways. It was a partnership of GSU’s College of Law and the J. Mack Robinson College of Business. Even Georgia Tech was part of the collaboration, which hopes to make Atlanta a more important hub for the practice and protection of intellectual properties.

Previous Article
Photo Pick: A pup’s first weekend in the city by Karla Vazquez
Next Article
Bars and Stripes by Kelly Jordan