By Maria Saporta
As published in the Atlanta Business Chronicle on July 24, 2015

In the ongoing push by Rotary International to eradicate polio around the world, Atlanta Rotarian Wilton Looney is challenging the local club to intensify its support.

Looney, whose wife Martha suffers from polio, has donated $918,000 to the cause–previously challenging the Rotary Club of Atlanta to match his gifts. Now he’s getting some help.

John Germ, who is president-elect of Rotary International for the 2016-2017 term, spoke to the Rotary Club of Atlanta on July 20–thanking the club for giving more than $1.2 million to the effort to eradicate polio. Germ, who has run an engineering consulting firm based in Chattanooga, also leads Rotary’s fundraising efforts for polio eradication. 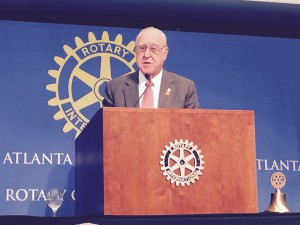 Germ said that because Looney is only $82,000 shy from having given a total of $1 million to the cause, Rotarians initiated another challenge. If the Atlanta Rotary Club will raise at least $82,000, Looney will match those gifts.

Looney, who was reached at his home a day later, said he was willing to increase his giving to make it an even $1 million–but he preferred it being higher than a one-to-one match.

“That’s peanuts,” Looney said. “They ought to do three times that or more.”

One reason Looney is so passionate about the cause is that polio is so close to being eradicated. Only one disease has ever been eradicated from the globe–small pox–and that was done largely because of the leadership of another Atlantan–William Foege–who was then at the Centers of Disease Control and Prevention.

So far this year, there have only been 33 reported cases of polio in the world–28 in Pakistan and five in Afghanistan. By comparison, at this time last year, there had been 122 cases in nine countries.

“Come the 24th of this month, it is very possible and hopeful that Nigeria will have gone one year without polio,” Germ told Atlanta Rotary. “The entire continent of Africa will have been polio-free for one year. Southeast Asia was declared polio-free a year ago March.”

Rotary, along with its partners, has reduced polio cases by 99 percent worldwide since 1979 when the organization had its first project to vaccinate children in the Philippines.

Germ said that much of the credit for the global effort to eradicate polio deserves to go to Bill Gates, co-founder of Microsoft. The Bill and Melinda Gates Foundation has been the biggest donor to the cause. The initiative gained steam with Gates teamed up with Rotary International to help with the global effort.

Looney, ever the optimist, said the goal to eradicate polio was now within reach.

“My guess is that wing a year’s time, there won’t be any polio left in the world,” Looney said.

Talk about timing. In 2017, the City of Atlanta will host the Rotary International convention from June 10 to 14 at the Georgia World Congress Center.

It will be the 100th anniversary of the founding of the Rotary Foundation, which was founded in Atlanta in 1917.

John Germ will be the president of the organization during the convention, and it is possible that Rotarians will be celebrating a polio-free world while they are in Atlanta.

In his talk to Atlanta Rotary, Germ said there really was no other city more appropriate than Atlanta to hold the 2017 convention and to celebrate the centennial of the Rotary Foundation.

A large delegation of Rotary International’s executive committee were in Atlanta for Germ’s talk because they have been working on preparations for the 2017 convention.

By the way, The Coca-Cola Co.’s Clyde Tuggle will be serving as the president of the Rotary Club of Atlanta during 2017. Tuggle, senior vice president of public affairs and communications for the soft drink company, already has informed his team at Coca-Cola that he’ll be spending a lot more time in Atlanta that year so he can fulfill his Rotary obligations.

The campaign was successful largely because of increased contributions from small and mid-sized businesses as well as a growth in giving from the top 50 companies running workplace campaigns.

By exceeding its goal, the organization will be able to donate more resources to initiatives to improve the quality of life and social services for people living in the United Way’s 13 county region

“When it comes to leadership giving and community support, our Tocqueville Society continues to be the largest in the country and contributed more than $12.7 million to this year’s campaign,” said Milton Little, president and CEO of Atlanta’s United Way. “And our Women’s Leadership Council has increased their fundraising efforts by more than $200,000 through inspiring, philanthropy-centered events.”

This past year’s campaign was co-chaired by the husband and wife team of René and Barbarella Diaz of Diaz Foods. They focused on launching and retaining small and mid-sized business workplace campaigns that yielded more than $500,000 in growth over last year.

Also, workplace campaigns from the top 50 companies, increased their giving by more than $1.6 million.

“We’ve definitely seen some growth over last year, and we still continue to broaden our community support through innovative initiatives that connect with both individuals’ and companies’ philanthropic interests and goals,” Little said.

Silence the Growl was just one initiative that found success during this year’s campaign. The program was launched last year in response to the growing problem of summer hunger for children in the Atlanta region whose only healthy meals may be eaten at school.

This year, the program was expanded beyond online fundraising to opportunities to host fundraising dinners and to volunteer with our partner agencies in the program. Silence the Growl saw exponential growth by enlisting more than 400 volunteers and is providing more than 22,000 meals to hungry children.

United Way donors and companies including Lockheed Martin and Assurant Solutions also have been supporting homelessness initiatives, such as Vets Connect, Kids Home and Street to Home through increased contributions of more than $250,000.

In addition, Wells Fargo’s contribution of $500,000 over the next five years to United Way’s Financial Capability Network will increase the financial literacy of at risk families.

“Bowers is a business leader of international stature who is being recognized for his leadership, extraordinary achievements, and commitment to corporate and social responsibility,” according to the release issued by the AJC when it announced the award.

The award is presented to leaders whose work within the community reflects the mission of AJC, building bridges of understanding among all people, safeguarding democracy and pluralism, and combating all forms of bigotry.

Most recently, Frank Blake of The Home Depot, Richard Anderson of Delta Air Lines, and Muhtar Kent of The Coca-Cola Co. have received this award.

“We are delighted to honor Paul Bowers as this year’s recipient of the National Human Relations Award,” said Dov Wilker, director of AJC Atlanta. “His leadership exemplifies what this award represents.”