Column: How Atlanta won the headquarters of GE’s Digital Operations

Although Atlanta was not selected to be General Electric’s future corporate headquarters, the process did lead to GE increasing its investment in the city.

On June 27, the company announced that it will locate the North American headquarters of GE’s Digital Operations in Atlanta – initially bringing 250 jobs to the Midtown area. 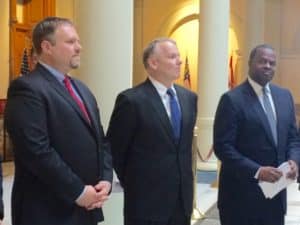 It reaffirms the comments Chris Carr, Georgia’s commissioner of economic development, made last December after the state found out it had been cut as a candidate for GE’s corporate headquarters.

“The opportunity to have high-level executives from one of the world’s great companies come to your city and evaluate the quality of life is great no matter what,” Carr said in an interview at the time. “I’m disappointed that we didn’t (get the headquarters) because we would have loved to have them. I’m also hopeful that where they are going to is going to lead to Atlanta, Ga.”

That is just what happened.

Jim Fowler, GE’s chief information officer, said that as soon as Atlanta was not picked for the corporate headquarters, it became a candidate for the Digital Operations hub.

“We raised our hands immediately and asked about Atlanta to the corporate team,” said Fowler, who has lived in Atlanta for the past four years – moving here to become CIO of GE Power Systems. “Everybody saw the value of the city here.”

One of the people who was on the exploratory team for the corporate headquarters was Chris Drumgoole, a vice president of the company who is the chief technology officer for GE Digital. 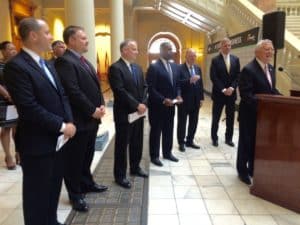 Photo shows the VIP turnout at Governor’s GE press conference. In addition to GE executives Fowler and Drumgoole, and Mayor Reed, there is Economic Development Commissioner Chris Carr (on the left). On Reed’s left is Chancellor Hank Huckaby, and Georgia Tech President Bud Peterson. They all are listening to Gov. Nathan Deal at the podium (Photo by Maria Saporta)

“Candidly, I think Atlanta would have ended up on the list either way,” said Drumgoole, who added the headquarter search “certainly gave us a better feel for the city and the state. Atlanta had so much to offer. It gave it a headstart” for the GE Digital Operations hub.

Drumgoole, who lives in Fairfield County, Conn. – where GE has been headquartered — said he does not know yet if he’ll be moving to Boston, where GE is moving its headquarters, or to Atlanta, but either way, he will be spending a great deal of his time here running the operations.

In an interesting twist, Fowler said the number of GE jobs in Atlanta could surpass Boston as a result of having the North American Digital Operations headquarters here.

“You could have as many, if not more, heads here than there will be in Boston,” Fowler said. “There are 300 jobs moving to Boston from Fairfield. You could have the same number here over time.”

Gov. Nathan Deal, who hosted the announcement of the Digital Operations move at the Capitol, said the headquarters search helped sell the state’s strengths.

“I certainly think that the effort we put forward to get the home office certainly helped us get the GE Digital partnership,” Deal said.

Asked if it could lead to even more GE jobs coming to Georgia, Deal said it was too early to tell.

“I just think success feeds more success,” Deal said. “I think it will be hugely successful.”

The GE announcement that it will be located in Midtown is further evidence of what major companies are looking for in today’s environment.

The company is considering 10 different office locations around Georgia Tech, even though it will begin operating out of its data center in Alpharetta. It hopes to move to its Midtown location in the fall.

“The vibe we are looking for is not a data center,” Drumgoole said. “The person we want to hire is someone who doesn’t want to drive to work. It’s someone who wants to walk or wants to bike or take transit.”

Fowler, who said his family refused to leave Atlanta when he was promoted, spoke of the city’s advantages – its universities, mass transit, a location where the talent wants to be, a huge technology hub, culture, great sports teams, great restaurants, and a great quality of life.

Atlanta Mayor Kasim Reed reinforced the point by saying, “The city of Atlanta has become the destination of choice for technology companies due in large part to our research institutions, our highly skilled workforce and welcoming environment.”

Interestingly enough, Georgia may not have gotten the GE Digital Operations if the governor had signed the “religious liberty” bill at the end of the last session.

When asked about the religious liberty bill, Fowler said GE respects everyone’s rights. “We would be hard pressed to set up any place where there was discrimination,” he said.

Just before the GE announcement on June 27, Gov. Deal spoke to the Rotary Club of Atlanta.

When incoming Rotary president Clyde Tuggle introduced the governor, he spoke of Deal’s “great courage” in vetoing both the religious liberty bill and the “campus carry” gun bill. 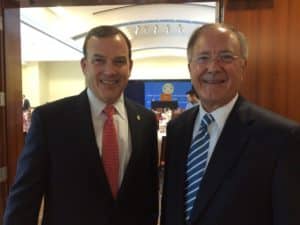 “He stood strong to political pressure to make sure we have a state that is safe and sane and a welcoming place to live,” Tuggle said.

The Rotary meeting was a passing of the gavel from outgoing club president Sonny Deriso to incoming president Tuggle. Deriso, chairman of Atlantic Capital Bank, has served as president of the club for the past year, and he received a standing ovation for his service.

“I thank you for the privilege to have been able to serve as your president,” said Deriso, who thanked Rotary leaders as well as his wife, Judy, and oldest son, Walt, who were at the meeting.

In taking the podium, Tuggle, chief public affairs and communications officer at The Coca-Cola Co., talked about the importance of Rotary to society.

“We live in extrordinarily turbulent times,” Tuggle said. “The bad news last week [the Orlando massacre] and more bad news this week [the United Kingdom voting to leave the European Union] show the instability in our world. It’s organizations like these, in times defined by divisiveness and turmoil, that are so important. We can provide civility and help define what it means to be good citizens.”

The Rotary Club of Atlanta will host the Rotary International convention next June during Tuggle’s term, bringing tens of thousands of Rotarians to the city.

“This year is an opportunity for us to put the best face forward for this city,” he said. “We can provide stability and the kind of healing that is so needed.”