By Maria Saporta
As published in the Atlanta Business Chronicle on December 6, 2019

It’s a family affair. Earlier this year, Judy Monroe, CEO of the CDC Foundation, asked her songwriting daughter – Kelley Elle – if she could write a song for global health.

“Through music and the arts, we can convey messages so differently than through other means,” Monroe said in an interview.

Elle, an emerging artist from Los Angeles, teamed up with Grammy Award winners Charlie Midnight and Jan Fairchild to co-write and produce an original song “Against All Odds.” 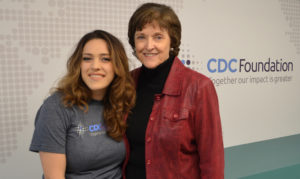 “The songwriters gifted the song,” Monroe said. “They gave us the right to use the song for the foundation, and we can use it as we wish. People can download the song. And the video is free on YouTube.”

The story of a music video for global health actually has ties to Monroe’s mother – Verna Monroe – who passed away on July 22 at the age of 97. Verna contracted polio when she was only 28, and she had several health challenges along the way, including a serious car accident, severe post-partum depression and a stroke.

In many ways, her long life was “Against All Odds.”

The last time Judy Monroe saw her mother was on July 4. A few days later she left to go on a multi-country trip to Africa to see the how those countries were faring five years after the Ebola outbreak.

“On the last day of the trip, I heard my mother had passed,” Monroe said. “I had this notion as I was flying home. I decided I would make a donation to the CDC Foundation in honor of my mother.” 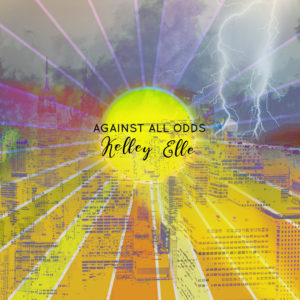 The donation was to have a video made to go along with the song. The Monroe family hired an Atlanta firm to produce the video, and on Nov. 27, the CDC Foundation released the music video and sent it as a gift to its donors and partners.

But Monroe hopes it will become a theme song for Atlanta’s global health community. Atlanta is a leading center for global health – thanks to the CDC and the CDC Foundation, The Task Force for Global Health, the Carter Center, MAP International, MedShare among many others that are now members of the Global Health Aliance.

Coincidentally the tagline for the CDC Foundation is “Together our impact is greater,” Monroe noted.

“We’ve got a lot of unsung heroes who are out there every day battling diseases,” Monroe said. “There’s all this work we’ve done with Atlanta on global health.”

Doing it honor of her mother, who was a huge advocate for vaccines to prevent polio outbreaks and other diseases, also was especially meaningful. Her mother was deeply concerned about how the growing resistance to vaccinate children against diseases. As a woman born in 1922, her mother’s life expectancy was 61. But thanks to modern medicine, she was able to live to be almost 100 years.

“This has been incredibly healing for my family,” said Monroe, who is trying to figure out ways to tie the song and the music video to the CDC Foundation’s 25th anniversary in 2020.

“I’m think for our 25th anniversary of bringing the arts to global health,” Monroe said. “We’ve had a real positive response to the song. Let’s unleash the arts for public health.”

More than 500 children undergo heart transplants in the United States each year – joining the thousands of children already living with a new heart. While medical advancements have improved over the years, many of these children and their families face a lifetime of challenges.

Enduring Hearts is the only national nonprofit organization dedicated to funding research that helps kids with heart transplants live longer, healthier lives. The need for research is especially important given the age of the patients and the fact that the average heart transplant lasts only 12 years.

One in four transplants will fail within five years – largely due to organ rejection – and less than 5 percent of patients will have the chance for another transplant.

“Enduring Hearts exists to fundamentally improve the health and quality of life of pediatric heart transplant recipients worldwide by funding transformative and ground-breaking research,” said Ankur Chatterjee, board president of Enduring Hearts. “Aggressively funding this research will help ensure each child who needs a new heart is able to get one that lasts a lifetime.”

Grants will be awarded to the efforts of researchers directly related to improving the life expectancy and quality of life of pediatric heart transplant recipients.

Update: Since this column appeared in the Atlanta Business Chronicle on Dec. 6, 2019, there have been several changes.  The Swan House Ball has been postponed to Sept. 11. Also, Jack Sawyer, one of the three co-chairs of the event, is now managing director of Cresset.

Lovette Russell is married to Michael Russell, CEO of H.J. Russell & Co., and she is a consultant with Coxe, Curry and Associates.

Jack Sawyer, one of the co-chairs of the event who is president of the Southeast region for Wilmington Trust Wealth Advisory Group, sent out an email from the History Center urging companies and individuals to make pledges and become sponsors of the event.

“A friend and inspiration to many, Lovette Twyman Russell is admired  for her passionate work as a community connector and  change-making champion for worthy organizations throughout our city,” the email read. “A former Swan House Ball co-chair and instrumental on the Atlanta  History Center’s Cyclorama Committee, Lovette and her family have  played an important role in the organization’s recent transformation.”

The other co-chairs of the 2020 Swan House Ball are Roz Brewer, chief operating officer of Starbucks; and Vicki Palmer, president of the Palmer Group and a former CFO of Coca-Cola Enterprises.

Previous Article
Column: Atlanta execs get first-hand look at homelessness at Sleep Out
Next Article
Column: Influential Atlanta Committee for Progress wraps up ‘year of transition’