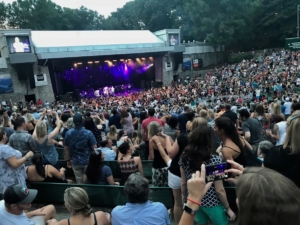 By Maria Saporta
As published in the Atlanta Business Chronicle on Aug. 3, 2018

State Bank & Trust Co. announced on April 4 that it had secured naming rights sponsorship of Chastain Park Amphitheatre in a multi-year deal with Live Nation to “help drive better awareness” of the bank in the Atlanta market and Georgia.

Less than six weeks later, State Bank announced it was merging with Houston-based Cadence Bancorp. The merger is expected to close in the fourth quarter of this year.

So what will happen to the naming rights of Chastain Park Amphitheatre?

The band LIVE performs its hits, including “Lightening Crashes” at State Bank Amphitheater at Chastain on July 29, 2018 (Photo by Maria Saporta)

“The name changing was contemplated in our agreement,” said Joe Evans, chairman of State Bank & Trust. “It will ultimately become Cadence Bank Amphitheatre at Chastain Park sometime after we close.”

Although State Bank name will eventually disappear, Evans sounded upbeat about the role Cadence Bank will play in Atlanta and the state.

The bank’s holding company will remain in Houston. But the headquarters of the bank actually will move from Birmingham, Ala., to Atlanta.

Sam Tortorici, CEO of Cadence Bank, will move to Atlanta along with the bank, and he is expected to get involved in the Atlanta community. Tortorici is the immediate past board chair of the United Way of Central Alabama, and he also is a member of the Rotary Club in Birmingham.

“I’m sponsoring him to become a member of Rotary Club of Atlanta,” said Evans, who expects Tortorici will speak to the Atlanta club towards the end of the year.

Once the merger is complete, Evans said Cadence will launch the rebranding of the bank, which will include the Chastain Park Amphitheatre.

When the merger was announced, Tortorici said in a statement, “State Bank brings a significant Georgia presence, which will be an important part of our combined company. I look forward to relocating to the vibrant Atlanta area, where I have spent significant time over my banking career, and to working with the experience and expertise of State Bank’s business leaders. We will work together to ensure our future success in Georgia and as a leading regional banking franchise.”

The combined bank will have $16 billion in assets, $12 billion in loans, $13 billion in deposits and approximately 100 branches serving Texas, Georgia, Florida, Alabama, Tennessee and Mississippi, based on the companies’ balance sheets as of March 31, 2018.

Atlanta executive Shan Cooper, who left WestRock Co. (NYSE: WRK) on May 11 as its chief transformation officer, has viewed her life as a series of assignments – including spending nearly 15 years with Lockheed Martin Corp. (NYSE: LMT).

Now she sees a new assignment in her future. 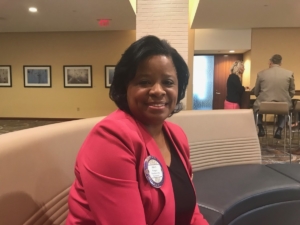 “During this phase of my life, I want to spend my time giving back and building community,” Cooper said. “I’m doing some fun things. I’m leading a project on the Westside – we’re planning a community celebration in March 2019. We are celebrating the Westside – making sure we have substantive positive change for our neighborhoods that we are creating the Beloved Community.”

Cooper, 50, also serves on the boards of the Carter Center, the Woodruff Arts Center and the Girl Scouts of Greater Atlanta. And she served on Atlanta Mayor Keisha Lance Bottoms’ transition committee, co-chairing the search for a new procurement officer.

She also wants to spend time with her family – that spans the generations of her grandmother to her grand-daughter.

“When I left Lockheed, I was planning to go off and enjoy life. We bought a property on the beach,” Cooper said. But after meeting Steve Voorhees and understanding how she could help the company work through its 2015 merger, she joined the company. WestRock merger on Feb. 29, 2016.

“I knew this wasn’t going to be a long-term job,” Cooper said. “I reached a point where I felt like my assignment at WestRock was done. I had help put the right team in place so they didn’t need me anymore. The timing could not have been better. I have family members who need my attention.”

When asked if she might be eventually take on another corporate assignment, Cooper said, “I’m not closing the door.”

A host of VIPs came for the dedication ceremony on July 31, which took place in front of the Shepherd Center, which he helped develop along with his wife Alana Shepherd. 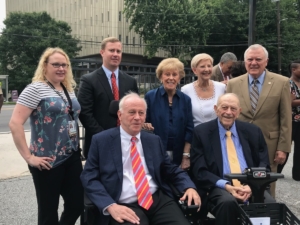 James and Harold Shepherd are both in wheelchairs at the dedication, which included members of the Shepherd family and Gov. Nathan Deal and his wife, Sandra Deal. (Photo by Maria Saporta)

Also present was James Shepherd, the inspiration for the Shepherd Center. He was paralyzed in a bodysurfing accident in Brazil in 1973, and his parents realized Atlanta needed a place where people with spinal cord injuries could be treated.

Harold Shepherd was honored for his role in building the Shepherd Construction Co. and helping develop roads across the state.

When he took the microphone, Shepherd thanked everyone for honoring him. But he said the birthday present he really wanted was for the state to close down Peachtree from Brookwood to Peachtree-Battle so he could “drive a car down Peachtree at 100 miles an hour.”

When he was elected as a U.S. Senator from Tennessee, Bob Corker said he would serve for two terms. As he approaches the last five months of his second term, Corker has emerged as one of the most independent Republican voices in the U.S. Senate.

His independence was on full display during a talk to the Rotary Club of Atlanta on July 30 when he talked about how the current two-party system is not working and how he is often at odds with the Trump administration when it comes to international relations. 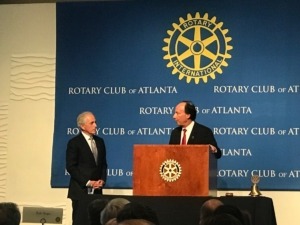 U.S. Sen. Bob Corker at the Rotary Club of Atlanta being honored by Rotarian Dave McCleary for his work to end human trafficking (Photo by Maria Saporta)

“I’ve always felt it was better for the United States to take a leadership role in the world,” Corker said, adding that the current administration “is in a different place”

Corker then pointed to his past colleague, former U.S. Sen. Saxby Chambliss (R-Georgia), who was at the lunch as an example of how the Senate has changed.

“I always thought free trade made us stronger,” Corker said. “We are the greatest country on Earth. The entire world relies on us to be a beacon.”

Corker said the first amendment and the free press are a vital part of our country, and it bothers him when President Donald Trump attacks news organizations.

During the question and answer session, Corker was asked about a possible third political party.

“Do the two parties work particularly well for our country?” asked Corker, repeating the question. “The answer is no. I would love to see a third-party candidate.”

He said a third-party candidate would help pull the Democratic and Republican parties closer to the center.

And then he said rhetorically, “we would almost be better off in our nation in terms of governing if we had a parliamentary system,” explaining that the current system does not make it easy to form coalitions.

“The way it is working now is not working to the best interest of the American people,” said Corker, who also expressed great concern over entitlement spending, which accounts for 70 percent of the federal budget. “We spend not one second on the 70 percent, which is going to take our country over the cliff. We are still not addressing the issues that are most important to our nation.”