Column: Bernie and Billi Marcus to be honored by Hillels of Georgia 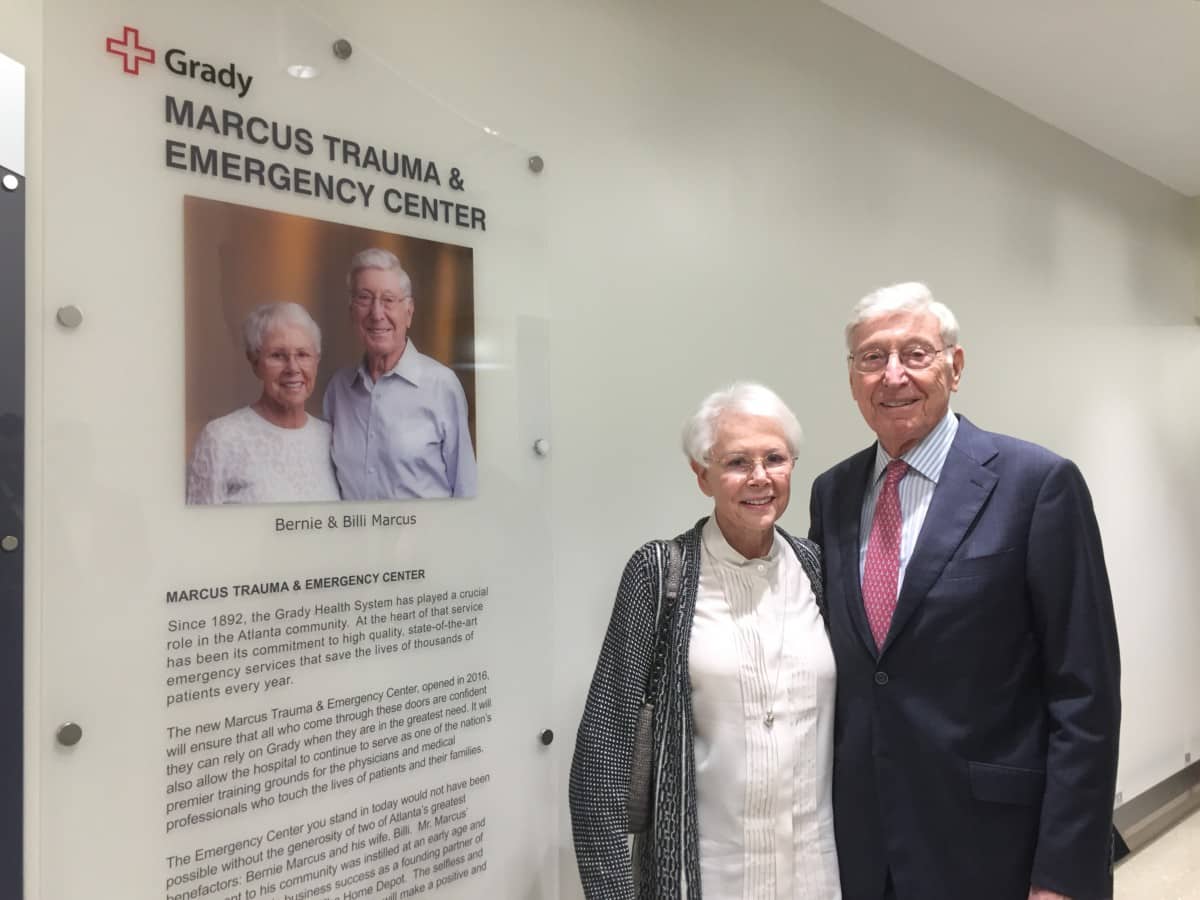 By Maria Saporta
As published in the Atlanta Business Chronicle on March 9, 2018

Philanthropists Bernie and Billi Marcus are being honored by Hillels of Georgiaat a dinner March 20 at the Georgia Aquarium for their generosity in supporting the organization that serves Jewish students on college campuses.

Last year, the Marcus Foundation donated $38 million to Hillels, including $2 million to the local chapter. That gift doubled the capacity of Hillels of Georgia to “enrich the lives of Jewish undergraduate and graduate students” and to give Jewish students meaningful experiences, such as trips to Israel.

But now it is more important than ever for Jewish college students to feel they have a home away from home, said Bernie Marcus, a co-founder of The Home Depot.

“We have been watching Hillel for a number of years,” Marcus said. “We have watched things happen on campuses, and we are concerned about what we are seeing. We see anti-Semitism and anti-Israel sentiments creating a very difficult situation for Jewish kids on campuses.”

The $38 million gift from the Marcus Foundation is being used primarily to train professionals who work in the Hillel Houses on college campuses. There are two Hillel Houses in Georgia — one on the Emory University campus and the other at The University of Georgia.

In fact, the sons of Billi and Bernie Marcus (Fred Marcus and Michael Morris) both attended Emory and took advantage of the Hillel community when they were students.

“We know from Home Depot that leadership counts. If you have quality people, you are going to have a quality organization,” Marcus said. “The key is to mentor these children and give them a place to go when there are anti-Semitic incidents Hillel is reawakening and becoming a much more vital organization.”

The dinner on March 20 will help raise money for Hillels of Georgia. The event co-chairs include Howard and Lynne Halpern; Jim and Lauren Grien; and Doug and Lila Hertz. The host-committee chairs are Ron and Lisa Brill.

At its recent “Welcome to Our Neighborhood” gala, Atlanta Habitat for Humanity raised more than $500,000 to support the nonprofit’s expanded mission to empower families through home ownership and by rebuilding neighborhoods — block-by-block.

The Home Depot Foundation served as the presenting sponsor for the inaugural fundraising event, which brought more than 500 donors and guests to Flourish Atlanta on Feb. 24 — an event that celebration Atlanta Habitat’s 35 years of supporting affordable home ownership.

The fundraising event is setting the stage for the organization to serve even more families beyond the record-breaking 123 new families served in 2017.

“Atlanta Habitat is loved throughout Atlanta because of the life-changing programs we provide families,” said Lisa Y. Gordon, Atlanta Habitat’s president and CEO. “The gala was an opportunity for our supporters to experience what we are doing through the imagination of our digital neighborhood and homeowner stories while supporting our mission in a whole new way.”

Most recently, Henning was executive vice president for the South Atlantic Division of the American Cancer Society. She was the division’s senior-most staff executive, driving development and implementation of the Society’s mission and income strategies across the division, while engaging corporate executives, high-level donors, and leadership volunteers in furthering the fight against cancer.

“Shari’s visionary leadership and experience in generating revenue for large nonprofits are assets that are essential to Atlanta Habitat’s expanded mission, which now allows us to increase the number of families we serve to record levels,” Gordon said. “Our executive team is thrilled to have Shari join us at this pivotal time.”

A new study on the state of anti-Semitism in the United States by the Anti-Defamation Leaguerevealed a troubling trend nationally and across the Southeast.

The number of anti-Semitic incidents was nearly 60 percent higher in 2017 than it was in 2016. In the Southeast region, there was a 32 percent increase. 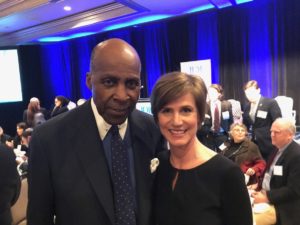 The sharp rise was due to the number of anti-Semitic incidents in schools and on college campuses, according to the study released Feb. 27.

In the four-state Southeast region, there were 74 anti-Semitic incidents in 2017 — including vandalism and attacks on Jewish institutions — up from 56 incidents in 2016. Jewish Community Centers in each of the four states were targets of bomb threats.

Those sobering statistics were reported at ADL’s annual Jurisprudence Luncheon on Feb. 28 held at The Ritz-Carlton, Atlanta.

The lunch honored Vernon Jordan, a civil rights leader, lawyer and a national political force, as well as Sally Yates, who served as deputy U.S. attorney general during the Obama administration and was fired by the Trump administration.

Both Jordan and Yates trace their roots back to Atlanta.

Leah Ward Sears, former chief justice of the Georgia Supreme Court, moderated a conversation between both leaders, when they talked about growing up in the South. 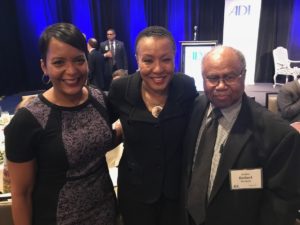 Jordan remembered his mother telling him as a young boy to be sure to go to the bathroom and to drink water before leaving their house to spare him the indignity of having to drink from colored water fountains or going to colored bathrooms.

“Just because you have to sit on the back of the bus, you are as good as anybody on this streetcar,” his mother would tell him.

For Yates, who grew up in a family of lawyers and preachers, the discrimination was more against women. She said her grandmother, who had studied law, had to become a secretary instead of a lawyer because she was a woman.

They talked about gun control, prison reform and the current political climate.

“I’m not terribly worried about the current administration and its activities,” Jordan said. “We have been here before. We will survive it.”

Jordan also told the luncheon audience that they should not get so angry that they can’t see straight.

“Had I been angry about all of the segregation and separation and second-class treatment I got as a kid, I wouldn’t be here today,” Jordan said. “I had to have a positive attitude that I could make something happen.”

Sears asked them about the Parkland school shooting where 17 people died on Valentine’s Day.

“I think the whole country has been moved by these students,” Yates said. “It feels different now. You are seeing businesses make decisions that are different… The last thing I can say is: ‘Fly Delta.’”