By Maria Saporta
As published in the Atlanta Business Chronicle on January 22, 2016

After six months at the helm of Atlanta-based CARE, Michelle Nunn is recruiting support from her extensive network of friends to help change the lives of women and girls around the world.

CARE is launching an Atlanta Women Really CARE chapter, where local women will contribute to the international organization’s efforts that focus on women and girls. 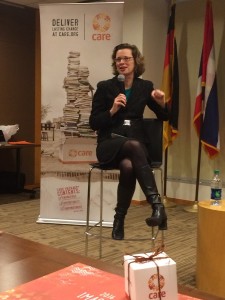 “We want 100 members,” Nunn told a group of women colleagues she had invited to lunch on Jan. 19 at CARE’s headquarters. “I know we can do really meaningful and transformational work.”

At the kick-off for this initiative, Nunn invited three of CARE’s regional directors to talk about the work that they’re doing in their part of the world.

Emma Naylor Ngugi, the regional director for East, Central and Southern Africa, talked about the problems that women face as victims of domestic violence.

And Mare Fort, regional director of Latin America and the Caribbean, spoke of the danger of income inequality, and how that is impacting the lives of women and girls.

Holly Solberg, regional director for Middle East and North Africa, spoke of trying to help the 4 million refugees from Syria, which she called the largest humanitarian crisis since World War II.

Interestingly enough, CARE got its start right after World War II when Europe was left devastated by the war. It began delivering CARE packages to Europe in May 1946, making this the 70th anniversary of the international relief effort.

Nunn said the organization is trying to adapt to today’s needs by asking how it can get to the root of social injustice and how to best fight poverty.

“By specifically focusing on woman and girls, we can change the trajectory of communities,” Nunn said. “How do we create the bonds of solidarity of women around the world.”

Nunn then described three different women she has met since she has been president and CEO of CARE. In Somalia, she met a girl attending a CARE-supported secondary school — the only one of six girls in her family to do so. Only 5 percent of the girls ever make it to secondary school while 45 percent are married by the age of 18.

In Ecuador, Nunn met a domestic worker — one of the most oppressed and vulnerable populations in that country. The domestic worker is part a group of women working with CARE to make sure they have basic rights.

Lastly, she met a Syrian refugee — a widow — in Jordan who had escaped with her four sons, the youngest, only six years old, who had been hit by shrapnel. CARE was providing educational vouchers so her sons could get an education.

“That’s the kind of work we are doing,” Nunn told the group of Atlanta women activists and friends. “Strangely enough, you can feel that sense of despair, but you come back with a sense of inspiration by how resilient these people are. We have got to engage more people in this movement.”

Georgia Tech has selected Nancy Parrish, a humanitarian activist who advocates for a military culture free of sexual assault and violence, as the 2016 recipient of the Ivan Allen Jr. Prize for Social Courage.

The decision was announced by Georgia Tech President Bud Peterson.

In 2011, Parrish helped launch a national movement — Protect our Defenders — to reform the way the U.S. military prosecutes sexual violence. Parrish will be honored during a symposium scheduled for Feb. 18.

“Ms. Nancy Parrish has long been at the forefront in addressing the many difficult social issues facing our country today,” Peterson said. “Here at Georgia Tech, we are familiar with her international humanitarian work and the many initiatives she has undertaken to help alleviate human suffering. Through her exemplary efforts as founder and CEO of Protect Our Defenders, she has given a voice to victims of sexual assault in the military. Our world and our country have been greatly enriched by her selfless service.”

The Ivan Allen Jr. Prize for Social Courage recognizes individuals who, by standing up for clear moral principles in the social arena, have positively affected public discourse at the risk of their own careers and livelihoods.

“I want to make a significant lasting impact, focusing on the root causes of discrimination, injustice and inequality in our society,” Parrish said.

The prize comes with a $100,000 stipend made possible by a gift from the Wilbur and Hilda Glenn Family Foundation, which has endowed the award in perpetuity. Parrish plans to donate the money to Protect Our Defenders. Prior recipients include William Foege, U.S. Rep. John Lewis, Beatrice Mtetwa and Sam Nunn.

The top brass of The Coca-Cola Co. showed up at the 34th annual Salute to Greatness Awards held on Jan. 16 at the Hyatt Regency Atlanta.

Not only was the event chaired by Lisa Borders, who heads the Coca-Cola Foundation. But the top individual honoree was Howard G. Buffett, a director on Coca-Cola’s board (see related photos on Page 6A, The Insider).

Coca-Cola Chairman and CEO Muhtar Kent attended the event and even got in a contest with Buffett on an effort to raise funds at the event.

When he was given the award, a video on Buffett was showing describing his philanthropic endeavors — which focus on agriculture, food, climate change and the environment. “Food is more important than money because you can’t eat money,” Buffett said, adding that he has gone to the most remote and desperate places in the world and been told by people: “Don’t let the world forget about us.”

Before the dinner, Buffett said he is especially concerned about the impact of climate change on the world including the polar bears, one of Coca-Cola’s marketing images.

Buffett also said that more than 50 years ago, he wrote a letter to Martin Luther King Jr. “He wrote me back,” Buffett said. “It was an amazing encouragement to me.”

Previous Article
‘It’s a new day’ for APS and the City of Atlanta
Next Article
Cavities: Beware the Second Wave!