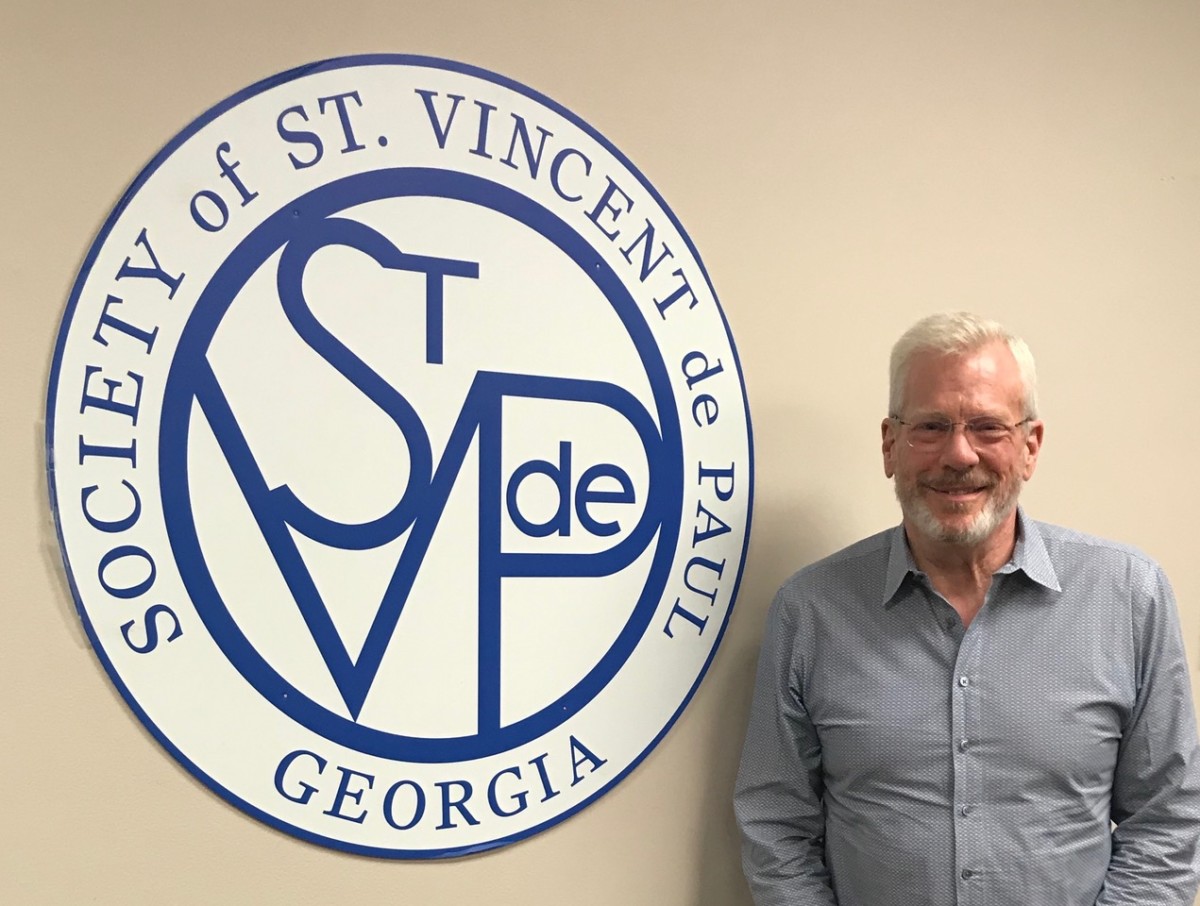 By Maria Saporta
As published in the Atlanta Business Chronicle on Nov. 30, 2018

For the first time in its 115-year history, the Society of St. Vincent de Paul Georgia is launching a capital campaign.

The $6.5 million campaign will permit the Catholic charitable organization to buy the Chamblee building where it has been based for 20 years and to significantly expand its services statewide.

John Berry, executive director of Society of St. Vincent de Paul Georgia, said the organization had a unique opportunity to buy the one-story building at 2050 Chamblee-Tucker Road owned by the Newburger-Andes real estate firm. The building is across the street from the Chamblee MARTA station. 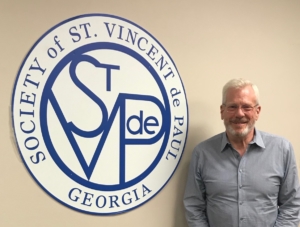 “We are buying the building for $1 million under market” value, said Berry, adding that Newburger-Andes has been a longtime supporter of the Society. “They have worked with us to make this purchase happen. We started talking to them five years ago, but we weren’t ready. Then we revisited it two years ago.” 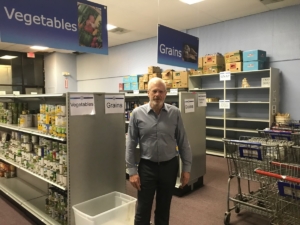 John Berry, CEO of the Society of St. Vincent de Paul Georgia, in the food pantry – designed to feel like a grocery store. The capital campaign will double the food pantry. (Photo by Maria Saporta)

The rest of the campaign would go towards renovating the building, expanding its services and adding about $400,000 to the Society’s endowment.

The improvements would include doubling its food pantry, which operates like a grocery store; creating a connected classroom to provide training for its statewide network, improving its family support center to provide private meeting rooms, expanding its jobs center and establishing a community pharmacy that would give clients free medicine for chronic illnesses like high blood pressure, diabetes and arthritis.

The campaign is being co-chaired by Joseph Blanco, general counsel for Crawford & Co.; and Michael Petrik, a tax attorney with Alston & Bird.

The Society already has raised more than $2 million, thanks to a grant from the SunTrust Foundation and 100 percent participation from its board members and its staff. Berry said the Society also is working to secure $1.2 million in federal New Market Tax Credits. And it now is seeking grants from foundations and individual donors.

“We feel really good about where we are,” said Berry, adding that it plans to close on the purchase of the building in March. The renovation of the building’s exterior and of the Society’s interior space is expected to be completed in the spring of 2020. 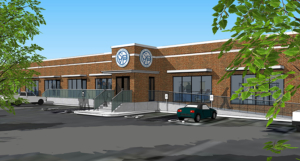 This is an architectural rendering of the proposed exterior of the St. Vincent de Paul Georgia office building. One component of the capital campaign calls for purchasing the building in Chamblee where they’ve been some 20 years. (Special: Cooper Carry)

The Georgia Society is affiliated with the international Catholic charity that was founded in France in 1833 by five students attending La Sorbonne. The Atlanta affiliate was established in 1903.

Berry, 63, joined the Society 12 years ago after a varied business career – 18 years in the nuclear power industry and later working in business sales for Comp USA. During that time, he had helped start a job ministry at his church – Transfiguration Catholic Church – in Cobb County.

In 2006, he got a call from a friend asking him if he would be consider filling the vacant CEO position at the Society, and he shows no signs of retiring anytime soon.

“Right now there are so many exciting things happening, and I’m not too tired,” Berry said. “Every day this job energizes me. This impacts lives. This changes lives.”

Stephanie Stuckey, the City of Atlanta’s former chief resilience officer, has joined Southface, a nonprofit organization that promotes sustainability policies and practices across homes, workplaces and communities throughout the Southeast. 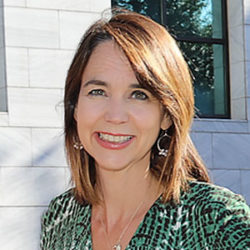 “We are thrilled to bring Stephanie into the Southface family,” said Andrea Pinabell, president of Southface. “From her work in implementing the Resilient Atlanta strategy to her 14 years in the Georgia House of Representatives, her career has been built on forging sustainable and equitable opportunities at the city and state level. Stephanie brings remarkable experience, energy and vision to this role.”

Before being named the city’s chief resilience officer, Stuckey served as the city’s director of sustainability. Earlier, she managed the nonprofit environmental law firm GreenLaw, served as Georgia state representative for parts of DeKalb County and the city of Atlanta, and practiced law in her own firm as well as with the State Senate Judiciary Committee and Fulton County Public Defenders’ Office.

“I am so excited to be joining the Southface team,” Stuckey said in a statement. “I have long supported their nationally recognized efforts to innovate sustainable building and urban community best practices. My own work has been focused on creating victories in environmental resilience and social equity, and I am thrilled to join forces with the Southface powerhouse.”

Solar and the Marcus JCCA

The Marcus Jewish Community Center of Atlanta soon will be installing solar panels in cooperation with Solarize Atlanta and its partner Hannah Solar, thanks to assistance from the Community Foundation for Greater Atlanta.

“The solar panels will be installed on the roof of the MJCCA’s Besser Gymnastics Pavilion,” said Jared Powers, CEO of the Marcus Jewish Community Center. “We are grateful to the Community Foundation, which facilitated an anonymous $50,000 donation, allowing us to embark on this first installation of solar panels. We will begin the installations in 2019 and complete them within the year. We look forward to expanding this solar initiative and identifying additional high-impact opportunities for reducing operating costs and environmental impact.”

This continues MJCCA efforts to “green” its buildings and its operation at its Zaban Park campus. Powers said the Center will be looking to implement recommendations made by Solarize Atlanta to support and maintain environmental sustainability.

“The system that we will install at the MJCCA’s Besser Gymnastics Pavilion allows the building to use energy from the sun first, before pulling in any additional grid energy to power the building,” said Trey Gibbs with Hannah Solar. “There is no battery storage. The energy gets generated and consumed immediately afterward in real time.”

Three Georgia nonprofits will receive a total of $100,000 from the Fifth Third Foundation through its 2018 “Strengthening Communities Fund” grants in Georgia. It is the second year the Cincinnati-based bank has made grants in Georgia – benefiting programs that support affordable housing, small business development and financial stability for individuals and families.

The Georgia recipients of the 2018 grants are:

* Hosea Helps: $25,000 will provide financial empowerment seminars to its participants;

* Urban League of Greater Atlanta: $50,000 will be used for its Small Business Start-Up Accelerator Program, its Housing and Community Development Program and programs that lead to the financial stability of individuals and families.

“We are committed to making community investments that improve lives, strengthen families and build strong communities in Georgia,” said Randy Koporc, president of Fifth Third’s Georgia region. “We believe these grants provide meaningful support to the efforts of these organizations to build and maintain strong, vibrant communities and that provide pathways to opportunity in our community.”

ANYTHING BUT EASY
ADDRESSING HOMELESSNESS AT ITS ROOT CAUSE
Nero Fiddled While Rome Burns: 2018 Edition
THE WAY IT SHOULD BE