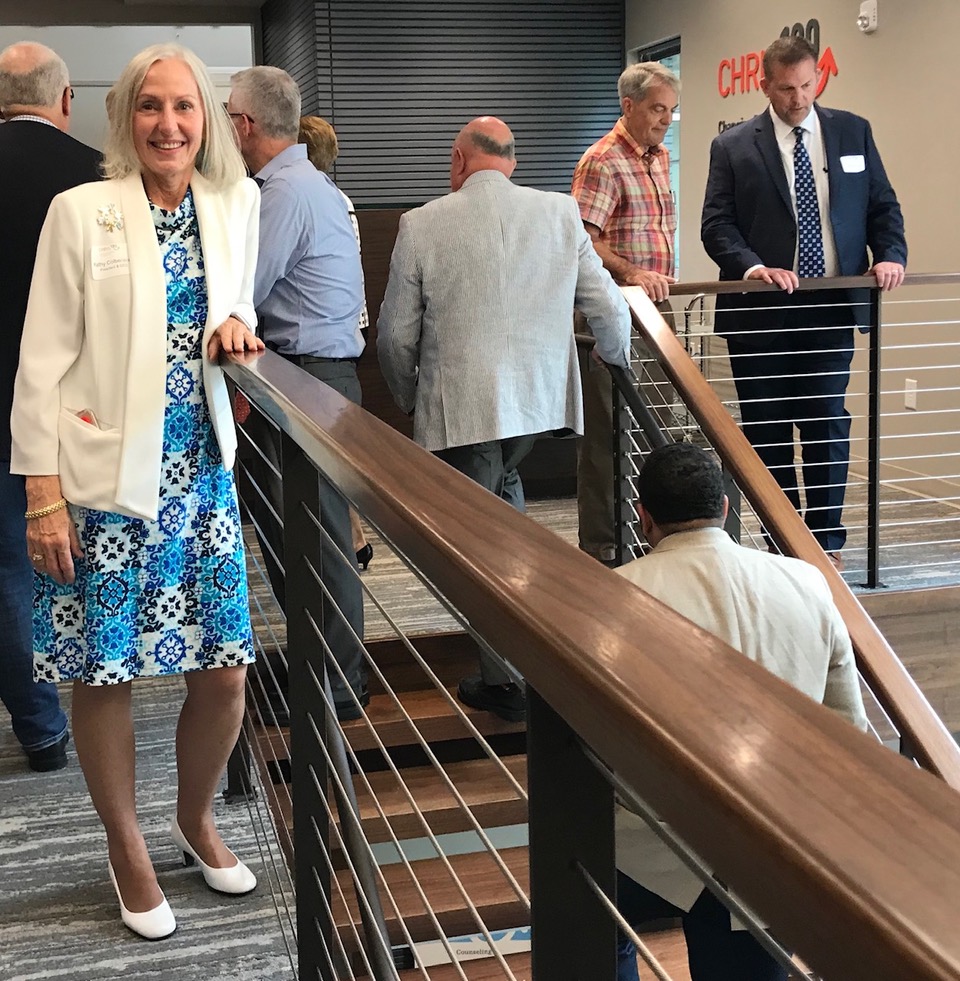 By Maria Saporta
As published in the Atlanta Business Chronicle on July 26,  2019

CHRIS 180 celebrated the grand-opening of its new Center of Excellence for Training, Education and Connections on July 23 at its campus on Fayetteville Road in DeKalb County.

The new 20,000-square-foot facility – developed through its successful $15 million Turning Point campaign – will enable CHRIS 180 to significantly expand its counseling services and to more than double its footprint from serving 6,500 people in 2016 to more than 14,000 in 2020. 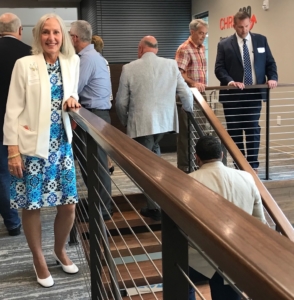 “It’s thrilling,” said Kathy Colbenson, CHRIS 180’s president and CEO. “It’s not just about bricks and mortar. It’s about the impact we will be able to have.”

The campaign also enabled CHRIS 180 to purchase homes in the community for youth and siblings in foster care. Other improvements include a duplex that will focus on family preservation services and provide assessments for high-need children in foster care.; upgrades to CHRIS 180’s Summit Trail Apartments for young adults who are homeless or aging out of foster care; and an integrated health clinic in partnership with Mercy Care to provide physical and behavioral health services, expected to open by the end of the year.

“It’s hard not to be emotional,” Colbenson said during the grand-opening ceremony. “This is an amazing day. What’s most exciting to me is what’s going inside the buildings. It changes lives and helps people become stronger and resilient.”

She remembered getting a call in 2015 from someone in the community who asked if CHRIS 180 would consider buying three houses adjacent to their existing property.

“It was perfect timing,” said Colbenson, thanking the neighborhood for welcoming CHRIS 180. She compared that to CHRIS 180 representatives needing a police escort when it attended a Gwinnett community to propose establishing a group home. 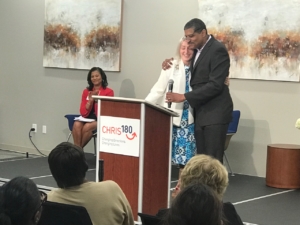 Kathy Colbenson gets a hug from Cyril Tuner, campaign co-chair, while Carmen Chubb looks on at grand-opening of new CHRIS 180 facility (Photo by Maria Saporta)

The new EarthCraft Center of Excellence is the first light commercial facility to receive LEED platinum certification in metro Atlanta for its green building practices, according to Andrea Pinabell, president and CEO of Southface.

Colbenson thanked the Kendeda Fund and the Joseph B. Whitehead Foundation for making key pivotal grants to the campaign, and she thanked numerous other donors for their support.

A multi-year effort to revitalize the Westside communities of Vine City, English Avenue, Ashview Heights and the Atlanta University Center is beginning to take hold.

John Ahmann, president and CEO of the Westside Future Fund, gave an update to the Rotary Club of Atlanta on July 22 – providing an historic perspective of the civic, corporate and philanthropic efforts to uplift the communities west of the new Mercedes-Benz Stadium.

Back in 1960s, the communities had about 50,000 residents. Today the population is down to 12,000. Since the WFF was launched in December 2014, the organization has had a goal to revitalize the community without displacing existing residents.

Ahmann said 83 percent of the units on the Westside are rentals. Of those households, 47 percent make less than $20,000 a year – meaning they can’t afford monthly rents of $500 or more.

WFF’s objective is to repopulate the Westside neighborhoods to 40,000 residents. Yet Ahmann said the urgent need is to develop high quality affordable housing units over the next five years – estimated the need of 1,500 new deeply affordable units.

WFF has plans to develop 800 units. Other organizations also are seeking to fill that need. For example, Atlanta Housing is projected to develop 585 subsidized housing units in the next five years.

“We are blessed to have raised private and philanthropic dollars,” said Ahmann, who said WFF has plans to develop 800 deeply affordable units. Other organizations also are seeking to fill that need. For example, Atlanta Housing is projected to develop 585 subsidized housing units in the next five years.

Ahmann then presented a slide showing that by December, WFF is expected to have 330 of those 800 developed or under contract. The WFF also is working to make sure existing home owners will be able to stay in their homes and not be hit with escalating property taxes.

“Over the next six months, you are about to see this really heat up,” said Ahmann, who said preference would be given to those who already living or working in Westside communities. “There’s so much suffering in the face of so much abundance.”

The U.S. Department of Housing and Urban Development held a two day expo on affordable housing at the Marriott Buckhead Conference Center on July 23 and 24. The conference was put on by the regional HUD office headed by administrator Denise Cleveland-Leggett. 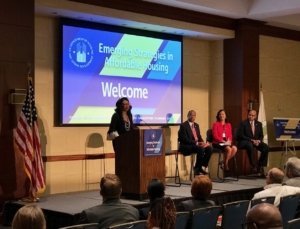 “What’s going on here in this region of the country is a phenomenon,” said U.S. HUD Secretary Ben Carson when he addressed the conference.

Carson went on to talk about the “challenges of affordable housing,” and he said one of the national solutions for affordability is to encourage people to be able to live in the same neighborhoods where they work. One of the new tools Carson mentioned was the establishment of “Opportunity Zones” that he called “a real game changer.”

Among the people who spoke at the conference were former Atlanta Housing Authority CEO Renee Glover and Integral Group’s Egbert Perry. And another emerging strategy Carson mentioned was modular housing.

After his talk, Carson had a private half-hour meeting with Atlanta developer Cecil Phillips, CEO of Place Properties, who is planning significant investments in modular housing in the region.

Atlanta-based Operation HOPE has received a $1.2 million grant from the U.S. Department of Commerce’s Economic Development Administration to support the financial recovery work in Puerto Rico.

The grant will go through the HOPE Coalition America, the the central programming arm of Operation HOPE’s national disaster and preparedness division. The grant will fund up to 300 workshops to empower entrepreneurs and small businesses to grow and succeed following Hurricanes Irma and Maria in 2017.

The initiative, part of the designated Opportunity Zone, will be matched with nearly $1.8 million in local funds and will be undertaken in partnership with Banco Popular. The workshops will focus on continuity activities such as business expansion, new business opportunity building, preparedness, and resilience.

“We are grateful to the U.S. Department of Commerce and the Department’s Economic Development Administration for awarding this grant to support our work in Puerto Rico,” said John Hope Bryant, the founder and CEO of Operation HOPE. “It will help us to continue to uplift communities there, and we will also be able to bring impact to a designated Opportunity Zone. As I’ve said before, these zones will begin to attract real capital into neighborhoods and this grant allows us to continue our work to empower inclusion and help the island’s economy recover and grow stronger.”

Atlanta-based CURE Childhood Cancer announced that it has made more than $4.3 million in research grants for its current 2019-2020 fiscal year.

“At CURE, we believe that investment in the highest quality research is the key to achieving significant progress in the fight against childhood cancer, said Kristin Connor, executive director for CURE.  “Our focus is two-fold: we prioritize research that will reach the bedside within five years and research which will improve the outcomes for the 20 percent of children not surviving today’s methods of treatment. While we continue our important work to increase survival rates, it is also imperative we increase funding into safer treatments which will not compromise the rest of a child’s life.”

During its current round of grants, CURE provided grants to 21 of the best proposals submitted by experts at leading institutions across the country. Precision medicine continues to be a strategic focus for CURE as it enters the third year of its $4.5 million commitment for the Aflac Cancer Center Precision Medicine Program at Children’s Healthcare of Atlanta.

“We have developed an incredible partnership with CURE in the fight against childhood cancer,” said Dr. Douglas K. Graham, director of the Aflac Cancer Center and professor of pediatrics at Emory University School of Medicine. “The gift from CURE will enable us to continue to develop and expand our Cancer Precision Medicine Program and provide optimal care to our most difficult-to-treat cancer patients. This ongoing partnership with CURE is critical to our mission to provide world-class cancer care to our pediatric cancer patients.”