By Maria Saporta
As published in the Atlanta Business Chronicle on January 29, 2016

For nearly 50 years, Citizens Trust Bank has been an anchor at 75 Piedmont Avenue a block from Auburn Avenue.

But the bank will be relocating its headquarters to 230 Peachtree St. in early February — marking a significant move for both the bank and the city.

“It’s really bittersweet,” said Cynthia Day, president and CEO of Citizens Trust Bank. “What I’ve said to my employees is we are changing our location, but we are not changing our mission or our legacy. We will carry that with us.”

Today, Citizens Trust is the largest African-American-owned bank in Georgia and among the top five nationally. But its roots are deep in the Sweet Auburn community of Atlanta.

Citizens Trust was founded on Aug. 16, 1921, by Herman Perry, who had tried to be fitted for a pair of socks at a white-owned store and was refused. Perry and four other partners — known as the “Fervent Five” — formed Citizens Trust so that blacks could own and operate businesses independently of white-owned institutions, according to the New Georgia Encyclopedia. 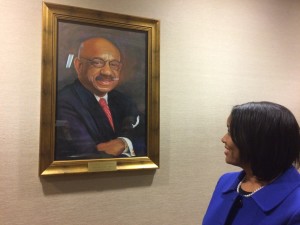 Citizens Trust, which was first located on Auburn Avenue, was instrumental in the building of wealth along Auburn Avenue–once called “the richest Negro street in the world.”

In 1969, the bank moved into its own headquarters building at 75 Piedmont — on the same block as another anchor institution — Atlanta Life Insurance Co.

Although the bank first sold the building to a Florida company in 1982, the perception was that it still belonged to Citizens Trust — thanks to its high visibility of having its name on the top of the building that has had prominent exposure from the Downtown Connector.

Citizens Trust will now be housed on one floor at 230 Peachtree, and it will lose the visibility of its own building. But that has already been changing.

In 2007 the building was acquired by Georgia State University. Since then, GSU has built a dorm across the street. Another multi-story student housing building is being built across Piedmont, on the former site of Gourmet Foods, another black-owned business.

“This building is not Citizens Trust anymore. We are just housed here. We are being engulfed by another tenant–Georgia State University,” Day said. “This move affords us the opportunity to celebrate all the wonderful history but it also is allowing us to celebrate new beginnings.”

Citizens Trust has much to celebrate. As dozens of banks in Georgia went belly up during the Great Recession, Citizens Trust “did not lose a dime of our shareholder’s money,” Day said.

“This institution is resilient,” Day added. “We had some erosion in our profitability as everybody did. But we never had a year during the recession that we were not profitable.”

In the conference room of the bank, there’s a portrait of the late Herman J. Russell, who was the bank’s largest shareholder — owning about 30 percent. Today, his oldest son, Jerome Russell, is on the board. and the family remains the largest shareholder.

The building where the bank will be moving to was one of the first designed and developed by Atlanta architect John Portman. The building recently was renovated as part hotel, office building with a new restaurant named for Portman.

“We are so proud of our history, our legacy and our mission — building community and being a catalyst for economic empowerment,” Day continued. “We are not changing. We are changing our location. We will use our new location as an opportunity to expand and grow. We see this as an opportunity.”

Ten new influential directors have been elected to the board of the YWCA of Greater Atlanta, a nonprofit dedicated to improve women’s lives and eliminating racism. The new board members, who will serve a two-year term, include:

* Bari Love, a consultant with Blue Earth Network and formerly with the Metro Atlanta Chamber;

* Ingrid Saunders Jones, chair of the National Council of Negro Women and a retired Coca-Cola executive;

“As our board continues to evolve, we have been able to move forward and progress because of the diversity of our membership,” said Erica Qualls-Battey, the YWCA’s board president. “The YWCA of Greater Atlanta is a great organization and we are fortunate for the incredible leaders that serve the women, children and families that utilize our services.”

Sharmen Gowens, executive director of the YWCA, said the new members will bring “a fresh perspective,” which will “provide tremendous benefits to the board and organization as a whole.”

Two leading Atlanta business leaders — Arthur Blank and Alana Shepherd — were inducted into Georgia Trend’s Most Influential Hall of Fame at its annual lunch Jan. 26 at the Ritz Carlton Atlanta.

Blank was accompanied by his fiancé Angie, announcing they would be getting married in June. Blank spoke of how he lost his father at a young age, and how his mother became a model of success for him. She passed away last year — “four months short of her 100th birthday.”

Blank, owner of the Atlanta Falcons and a co-founder of The Home Depot, pledged to “do everything we can to make this community stronger.”

Shepherd, founder of the Shepherd Center who has seen countless spinal cord injuries, gave the audience a public service message about diving.

“The only safe dive is the dive you don’t take,” Shepherd said, adding that one can have just as much fun jumping into a pool or lake rather than diving.

The Georgian of the Year was Sam Olens, Georgia’s attorney general, who was introduced by Bill Bolling, founder of the Atlanta Community Food Bank.

Saying they were both height-challenged, Bolling said: “We see things eye-to-eye. Not really. But I have deep respect for you Sam.”

Not to be outdone, Olens said, “You will never meet anyone who is closer to an angel in our state than Bill Bolling.”

The funniest line, however, came from Atlanta Mayor Kasim Reed. Two years ago, Reed and Gov. Nathan Deal were at the same lunch when Snow Jam hit.

Shan Cooper, who has been head of Lockheed in Marietta, mentioned the weather in her remarks.

“Shan wasn’t the only one who checked the weather before coming here today,” Reed joked.