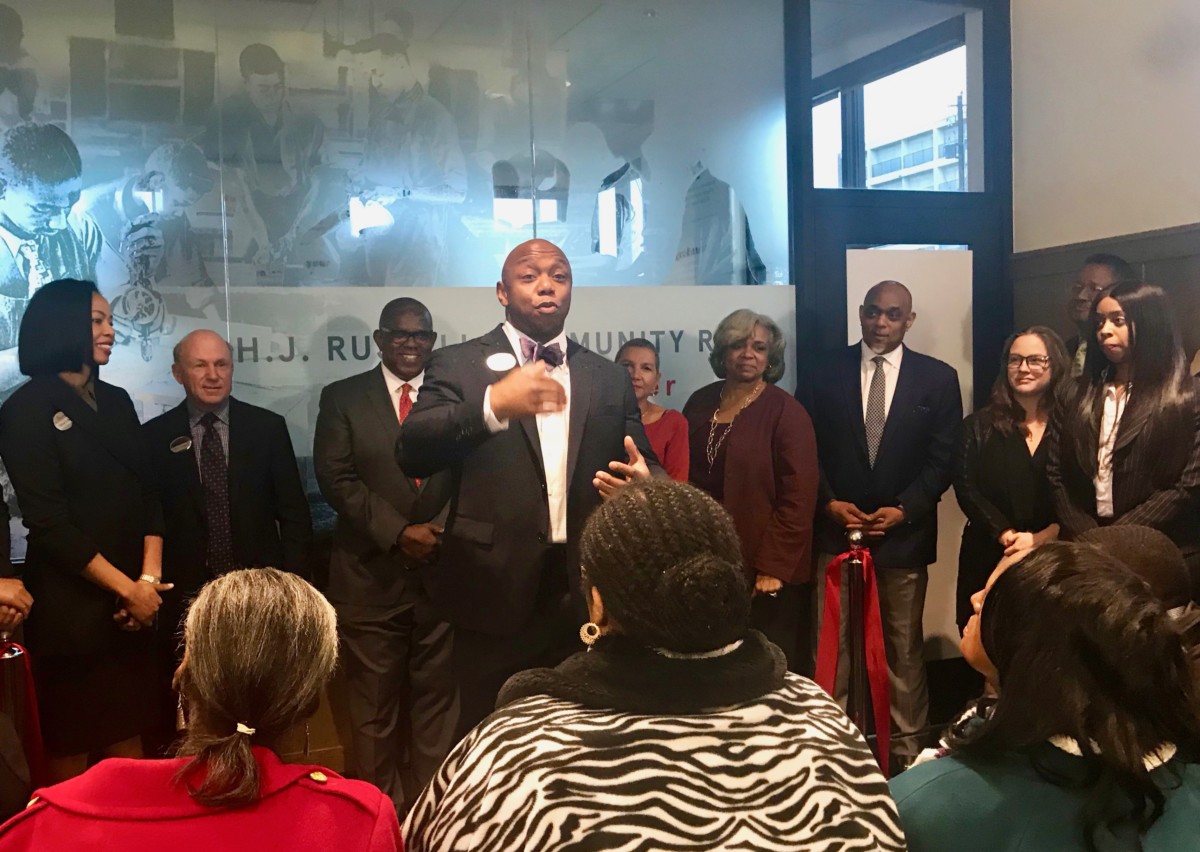 As published in the Atlanta Business Chronicle on February 22, 2019

When Dan Cathy first began challenging the Atlanta business community to invest in Atlanta’s Westside, businessman Arthur Blank suggested to the CEO of Chick-fil-A Inc. that he should open a restaurant in the community.

Chick-fil-A opened its restaurant on Martin Luther King Dr. on Jan. 18, 2018, across the street from the historic, but vacant, Paschal’s Motor Hotel and Restaurant.

On Feb. 19, Cathy dedicated the H.J. Russell Community Room that is part of the restaurant in memory of the legendary builder who was a fixture in the Atlanta business community and one of the leading African-American businessmen in Georgia. 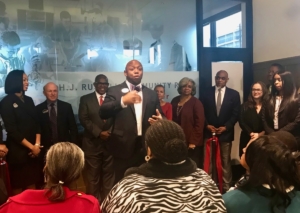 The Chick-fil-A restaurant now has been open for more than a year, so it was an opportunity for Cathy to reflect on the decision of opening the store in a community that has been struggling for years.

“This doesn’t fit any of our demographic models,” Cathy acknowledged. “We have a fine-tuned way of measuring population, income levels, employment. It’s a real sophisticated method we have. It didn’t fit any of it. It was way off.”

Cathy, however, got his executive team to agree to build the store near the corner where MLK meets Joseph E. Lowery Boulevard.

“This is probably the most courageous step we have made,” Cathy said. “It’s been a good business decision. But it’s probably one of the most challenging restaurants that we have.”

Most of the employees come from the community, and some have never had a regular job or an opportunity to interface with the public.

Quincey Springs IV, the owner and operator of the Westside’s Chick-fil A, said there have been challenges, but it’s been worth it.

“The very reason that it didn’t fit the model is why it belongs here,” Springs said. “Chick-fil-A has served in this community for years. Why not start in the birthplace of the company?”

Springs added the restaurant has seen growth in the beginning of its second year, and that the restaurant is stabilizing thanks to “some great team members we have hired along the way.”

Cathy said the restaurant is performing well, operating slightly less than the mid-level of other Chick-fil-A stores.

“Not everything is dollars and cents,” Cathy said. “This is the kind of project that is good financially, but it’s really good in nurturing the soul of our operation. It’s our opportunity as business people to be bridge builders.”

Seven new Atlanta leaders are joining the board of the Westside Future Fund.

“I am grateful these talented Atlanta leaders have chosen to serve on the Westside Future Fund Board of Directors,” Richard Dugas, Jr., chair of the Westside Future Fund, said in a statement. “They each have dedicated their lives to advancing their respective organizations, whether in business or community service, and I have no doubt that they will bring high energy and expertise to help tackle the long-standing challenges on the Westside.”

Jim Grien, president and CEO of TM Capital Corp. since 2008 and a trustee of the Marcus Foundation;

Wonya Lucas: president and CEO of Public Broadcasting Atlanta; and

The addition of these new members significantly expands the size of the Fund’s board to 23 members.

“We are thrilled to add these impressive individuals to our board,” said John Ahmann, WFF’s president and CEO. “We have an ambitious mission and the breadth of their leadership experience combined with their deep commitment to serving the community will make our organization and Atlanta’s historic Westside even stronger.”

Ten new people are joining the board of the Piedmont Park Conservancy, a nonprofit organization that works with the city of Atlanta to maintain and enhance Piedmont Park.

The Conservancy was founded in 1989, and it helps raise more than $3 million for the park. It also manages 90 percent of the overall maintenance and security of the park.

Those new board members are: