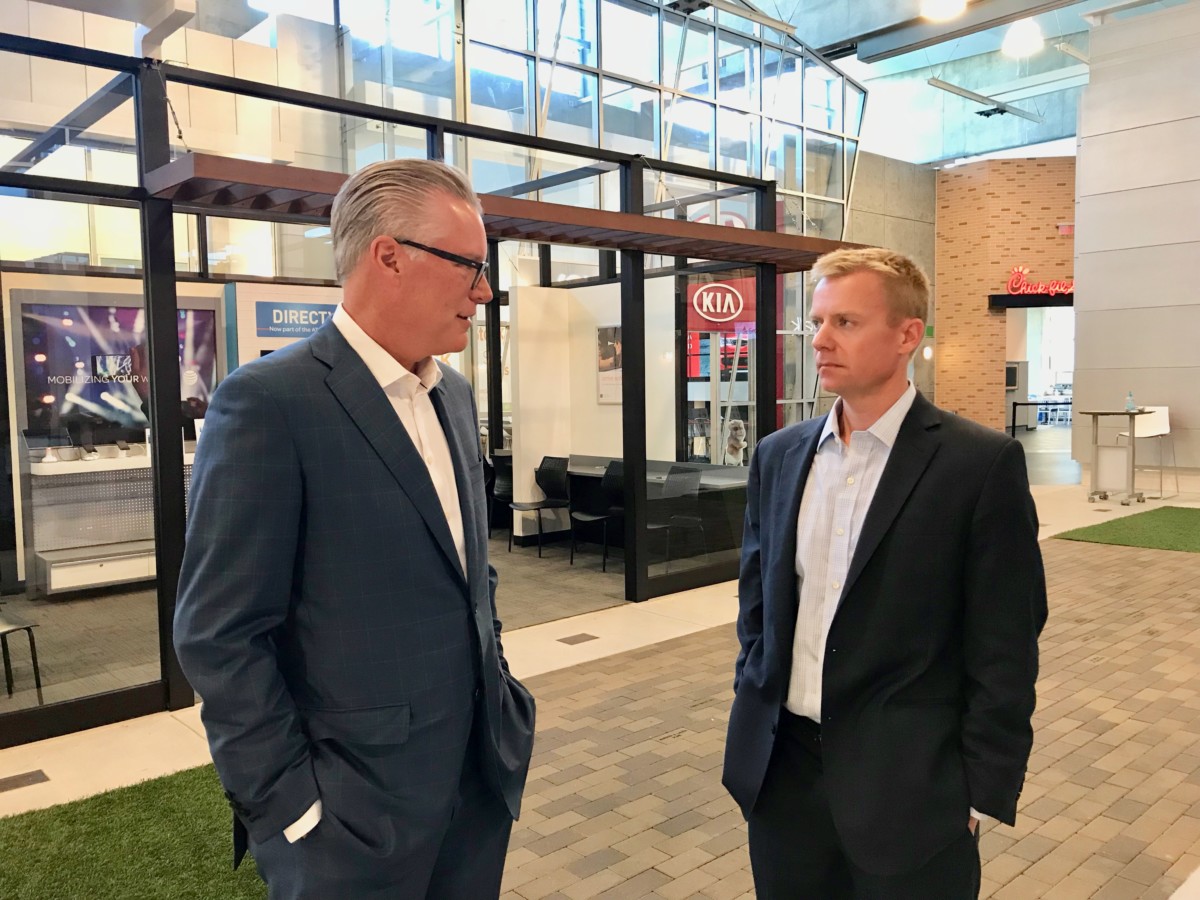 During a morning “fireside chat” with Sir Richard Branson, Delta Air Lines CEO Ed Bastian made a surprise announcement that the airline will contribute $2 million to help launch a new program by Junior Achievement called 3DE. 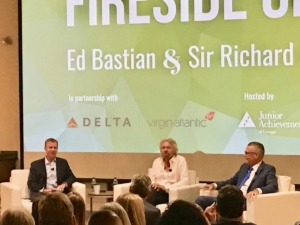 The June 20th event, hosted by Junior Achievement of Georgia at the JA Chick-fil-A Foundation Discovery Center, brought together two iconic CEOs and partners in the airline world. Delta has had a 49 percent stake in Branson’s Virgin Atlantic Airlines.

Jack Harris, president of JA of Georgia, moderated the chat, and he was totally caught off guard by Bastian’s $2 million announcement that Delta will be the first corporate backer of 3DE, formerly known as JA Academy.

“Jack, you are making a big difference,” Bastian told Harris. “We are proud of what you are doing with JA Academy and 3DE. We want to be one of those national partners as you roll it out.”

Harris said it is still a bit early to talk about JA’s plans to launch 3DE. That initiative would use JA Georgia’s successful model of having a JA Academy in a low-performing school and take it national.

“Education should be re-engineered,” Harris said. “A lot of the innovation in education exists in pockets.”

Delta’s $2 million gift will be made over five years, and it will begin in 2019, according to Tad Hutcheson, Delta’s vice president of community and public affairs. It will be in addition to Delta’s ongoing contributions to 30 JA chapters on four continents.

The Branson-Bastian conversation covered a lot of ground — both during the morning program and at a media session afterwards.

Bastian was asked about the corruption investigation underway at Hartsfield-Jackson Atlanta International Airport and how he felt about a possible state takeover of the airport. 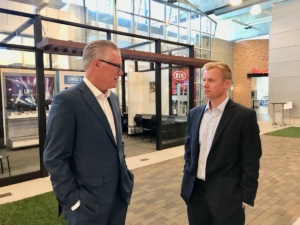 “No question that the issues around corruption and challenges of running a large airport require further improvement,” Bastian said. “That said…we are opposed to a state takeover. I’m not sure whether the state would have some of the same issues. We have the crown jewel of air travel in Hartsfield-Jackson. The city should be proud of that.”

Both CEOs expressed disapproval over the current political climate, both in the United States and the world.

“There’s a lack of political leadership we are seeing in the world, not just in the U.S.,” Bastian said. “Business leaders need to step into that void and have our voices heard.”

Both executives spoke against the current U.S. policy of separating children from their parents at the U.S.-Mexican border.

“We are very clear — our mission is bringing the world together,” he said. “Anything that runs counter to that, Delta is going to be opposed.”

Both men certainly were comfortable with each other. The program started with a casually-dressed Branson saying the only problem he had with Bastian were the ties he wears. He then took out a pair of scissors and cut Bastian’s navy blue tie — throwing the end pieces to the crowd.

Branson then said there is “no better airline in America than Delta. It’s quite nice to have a big brother.”

Bastian also told the gathering of JA friends and supporters that Delta’s revenues are up 9 percent so far this year. It is investing in the airline and putting billions into airport improvements and expansion.

“And what is music to my ears, we are doing it with no debt,” he said. “We have taken a mindset that we actually control our own destiny.” 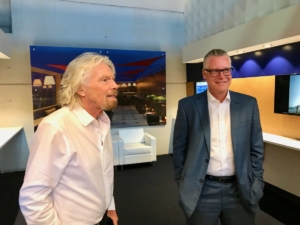 Both executives spoke about the environment. Branson said people should be trained in clean energy jobs and move away from coal. “The world would be better for it.”

Bastian also said the business community has had a reluctance to engage in climate change, but he said Delta was reducing its carbon footprint by 2 percent a year.

“We love Atlanta. We are tied at the hip,” Bastian said, then referring to a controversial issue that arose earlier this year. “When all this crazy stuff with the NRA happened, we were never going to leave. Atlanta has the best airport in the world.”

About 1,800 people from around the world came to Atlanta from June 19 to June 21 for the annual “Service Unites” conference – which is organized by the Points of Light Foundation. 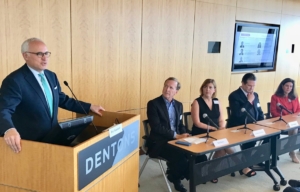 The co-hosts for the Service Unites conference in Atlanta were Ann Cramer, a senior advisor with Coxe Curry & Associates, and Eric Tanenblatt, global chair of Dentons’ public policy practice and former vice chairman of the Corporation for National and Community Service.

Dentons has been providing pro-bono services to the Atlanta-based Points of Light Foundation — as well as the predecessor organization — Hands On Network.

The law firm invited national leaders in the volunteer world to a discussion at its offices June 19 — including Neil Bush, who chairs the Points of Light board — an organization started by his father — former President George H.W. Bush; Barbara Stewart, CEO of the Corporation for National and Community Service; Rick Jackson, founder of goBeyondProfit and CEO of Jackson Healthcare; and AnnMaura Connolly, president of Voices for National Service. 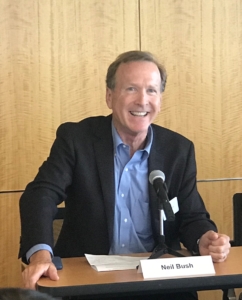 Because Points of Light is headquartered in Atlanta, the city has been viewed as a hub for volunteerism and service.

“When we merged with Hands On, we intentionally moved the headquarters from Washington, D.C., to Atlanta,” Bush said. “It was a great decision.”

But he added it could have been located in other cities, such as Dallas or Houston.

“My theory was anywhere but Washington,” Bush said because the U.S. capital city has such an “inside the Beltway” mentality. “It was a great move. Atlanta is a great city. It’s an amazing place that has such a rich history of civic engagement.”

Tanenblatt said volunteerism and service is “part of our ethos — not just Atlanta but Georgia” because of great leaders like Martin Luther King Jr.

“It’s just something you do in Atlanta,” Tanenblatt said.

Nonprofit group Horizons Atlanta has received a $607,408 grant from the Georgia Division of Family and Children Services. The award, which includes matching agency funds of $911,112, will give the nonprofit a boost of more than $1.5 million.

It is the largest gift that the non-profit has ever received, and it will enable the organization to continue its work with underserved Atlanta youth through its six-week summer programs while adding staff support and expanding its year-round afterschool and Saturday programs.

“We appreciate the confidence and support DFCS is bestowing upon us through this award,” said Alex Wan, executive director of Horizons Atlanta. “Horizons Atlanta is doing life-changing work with Atlanta’s young children and youth, and this grant will assist us in better supporting their academic, physical, and social-emotional needs during the summer and throughout the school year.”

The DFCS grant will comprise a significant portion of Horizon Atlanta’s operating budget.

The funds will be used to support the salaries of its teachers and reading specialists as well as the addition of a new regional person to assist with the enrollment and data needs of the program sites. The grant also will be used to help cover the costs of transportation, including daily round-trips to transport students from their homes.

According to information from the Georgia Statewide Afterschool Network, for every Georgia student who is enrolled in an afterschool program, there are two more who are waiting for space to participate if a program were open to them.

One of the largest barriers to children participating in afterschool and extracurricular programs is cost. Horizons Atlanta provides its programs tuition-free to students in underserved communities who need it most.